The Annual BionicBasil Snowball Skirmish 2017, Really Odd Hats and We Got This on The Pet Parade Blog Hop #226 with Rascal & Rocco Co-Hosted by Basil & Barking from the Bayou 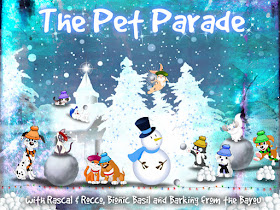 Welcome to The Pet Parade, woo hoo and to our Annual Snowball Skirmish, a once a year event not to be missed fur anything!

This year we really went to town and got the fake snow machine out instead of using the Virtual Reality Suite in the Bunker, and just to add to the fun we all wore really odd hats fur the event.

Fudge was really cooking up a storm, pardon the pun, as he wore his chefs hat.  I wore my most prized viking helmet, well it is pawesome.  Smooch wore his Crocodile Dundee affair complete with dangly corks - don't ask, purrhaps he thought they'd shield him from incoming fire!

Pandora wore a rather glitzy top hat, Parsley had his Flint Westwood cowboy hat on and Amber, well she wore her witches hat, she said the wide brim kept the snow off her face!

So we met in the courtyard at lunchtime, I mean come on, who does snowballs at dawn anymore? MOL  Anyhoo we started to make our fluffy white missiles, as the rules say, mew have 5 minutes before the event begins to get as many snowballs made as possible.

It wasn't long until we each had a pile of snowballs at the ready and we each choose our position in the courtyard.  Parsley thought he'd be sneaky up the tree, Amber was hiding out behind the Mill-wheel cake, and mew'll neffur believe it but we had an uninvited snowman turn up, we have no idea how he heard about it but appurrently our yearly event is garnering quite a lot of attraction up the North Pole! MOL  [Let's just hope he doesn't melt when the weather changes in the next couple of days - oops.] 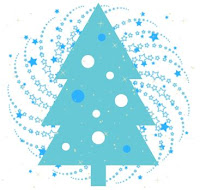 The Saturday Special on Tuesday

Wordy On Wednesday with Amber

We'll be back on the morrow with another sponsored post and again with our usual selfie selection on Sunday, so hope mew can join us then, in the meantime we wish mew all an epic weekend 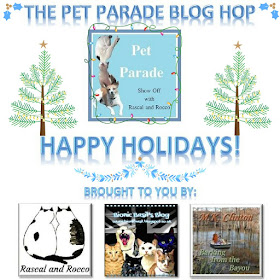