Wordless on Wednesday with Parsley 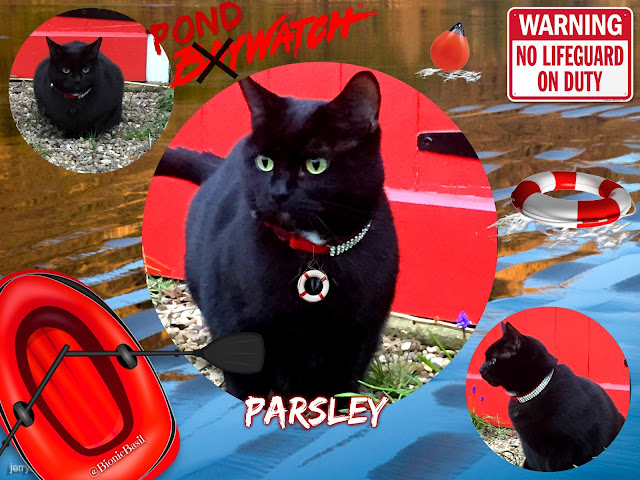 Mew may remember last week on Thoughtless on Thursday with Smoochie and myself, that young Parsley aka Mr Sauce accidentally slipped off a wobbly rockery stones and fell into the pond while he was purrsuing a young froglet.

And although he got out faster than mew could say "make mine a niptini, shaken not stirred!"   this got me to thinking that purrhaps we needed to implement a few safety features around said pond.  I've called the new scheme

Now our pond was installed purely fur the little froggies in the garden, there's no fishies so the P.A. didn't net offur it and to be honest we get puddles in the courtyard bigger than this installation.  Other than the froggies there's a bit of pond weed and a rather lovely water lily and that's it.  There are three shelves around the edge to place plants on but the P.A. just removed the old ones as they'd seen much better days, basically we have a purrmanent puddle as a garden feature.

So do any of mew have ponds, and how do mew police yours fur safety?

Bearing in mind that we only have frogs so netting isn't going to wurk...

Our only other thought is that since Parsley had an unexpected dip, did he learn his lesson and in future keep away from said wetness?

So many points to ponder...

Graphics created used under paid licence  www.pizap.com
Glitter Text www.picasion.com
Posted by Basil and The B Team ~ BionicBasil ® at 04:00