Thoughtless on Thursday with Angel Posie 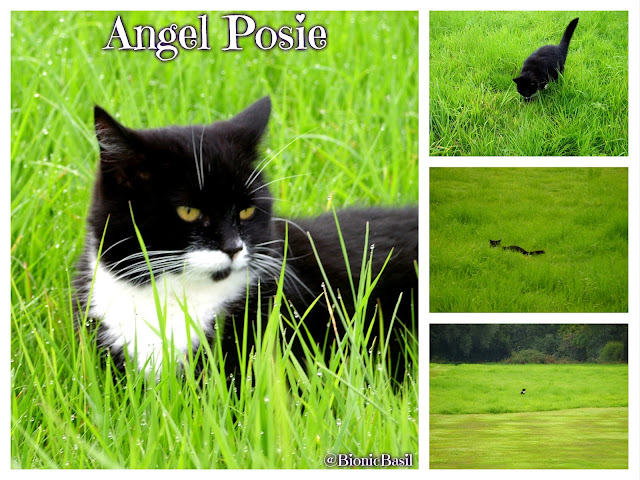 Angel Posie is with us today showing us her thoughtless and reckless abandon on one of her many expeditions down the field.

It will be a year this month since she went OTRB [22.4.15] and we still miss her furry chops effuryday.

She was a grumpy, bad tempered kitty and it still makes us smile today because we loved her.  When the P.A. furst saw her at the rescue, she knew without a shadow of a doubt that no sane, rational purrson would effur adopt her and give her a purrmanent home as she had a severe purrsonality disorder and was a scratcher/biter/semi-feral wild cat -  and I bet mew wouldn't think that to look at her little, uber cute chops but looks can be furry deceiving!  Even the peeps at the rescue thought the P.A. was more than a little bonkers and expected her back the following week to give Posie back.

The P.A. knew that Posie would neffur be a true lapcat or furry affectionate but she didn't mind and bundled her off home with Snowie, happy in the knowledge that whateffur Posie was like, she'd got a home fur life regardless.  Offur the years Posie mellowed slightly, moderately slightly and liked her own company, and sometimes she would get on a lap but only if there was a soft cushion between her and said lap.  She was neffur one fur cuddles, not like the rest of us but she did like being brushed, a lot and tickles behind the ears.

All in all, we wouldn't have swapped her fur all the catnip in all the cosmos!

By Ruckus the Eskie and co-hosts Love is being owned by a Husky and M.K Clinton