Colouring with Cats ~ Getting Your OM on with Mandalas on Mondays!

We're here today with Mandalas on Monday to start your week on the right note.  Yesterday mew may remember that we mentioned how stressed Smooch was with his little purroblem, and that got us to thinking, well if Smooch is stressed we'd better take a peek at the P.A. as she's the one that has to do effurything.  So we did a 24 hour assessment of her and came to the conclusion that her stress levels were rather high and that she needed to find her own Zen Harmonies, which resulted in me devising a furry cunning distraction fur her in a pleasant and fun manner without her even being aware that she was being treated fur her over-wurked mind and supurr tiredness.

This resulted in some rather high-tech research on my part which led to the discovery of mandalas, and then onto designing mandalas that the P.A. could colour in; in her spare, spare, spare time! MOL

Well she is quite partial to being a bit arty-farty on occasion, so I thought this was the purrfect antidote to her stressful malaise - aren't I thoughtful?  So I went into the craft room and found her colouring pencils and presented her with this: 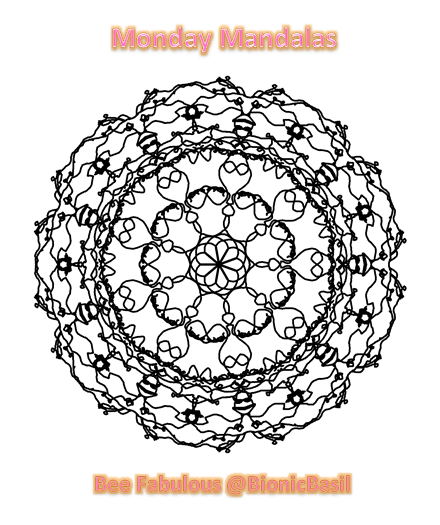 Appurrently colouring de-stresses the mind and produces all those magical feel good vibes, so it's just purrfect.

If mew find that your peep is feeling a bit tense as it's Monday again and the grind begins fur the week ahead, we suggest mew right click the image and print it off, present it to your peep with a few coloured pens, pencils, chalk, felt-tips or markers and tell them to take five, chill and do some colouring with cats.  They will thank mew fur it with mucho extra cuddles, catnip and treats, we're certain they will when they realise how good they feel and it's all because of mew! MOL 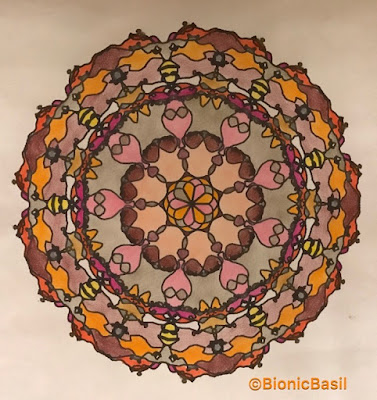 She said and I quote, "Basil that was awesome fun, how ever did you come up with that?"

I just smiled and purred loudly, knowing my wurk fur the day was done.

as we'd really love to see your interpretation of today's mandala.

We'll be posting another next week to keep those Zen Harmonies flowing as getting your OM on really does wurk wunders, and neffur under estimate the power of the pencil.  BTW don't furget to stop by tomorrow fur the penultimate episode of