So with Mack's travel card ready, I hopped in The TTTB and set the co-ordinates fur the white sandy beaches of Trout Towne. 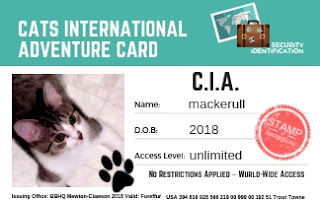 Last time I went on a little jolly, Miss Dai$y, Mackerull's sisfur joined me on a totally terrific trip to Paris, and mew can read all about our fabulous day out by clicking here!

The flares were on the beach as before to assist my landing, as mew neffur know what could be lurking under the sand!

Young Mackerull was eagerly awaiting my arrival and bounded up to the door and was knocking before I could even open it.

"But Smooch, I've been waiting like, erm 3 minutes and I'm soooooo excited, where are we going?" Mack asked jumping up and down on the spot.

I gave him my most toothiest grin and replied. "Little dude we're going on a monster hunt!"

His eyes were as wide as saucers as he gulped and squeaked. "Monster hunt?"

"Yep fur real dude, we're going in search of The Loch Ness Monster!" I was still grinning. "Are mew ready fur the trip of a lifetime?!"

"Oh boy am I ready!" Mack breathed in awe. "And can I hit the big red button that Miss Dai$y told me about?"

"Mew sure can, so let's get going and find Nessie!" I laughed.

Inside the TTTB I pointed to a large, red button on the control console. "Mack, take it away dude!"

He smacked the button with his paw and we vanished...

I flung the TTTB door open and let Mack step out into the greenest of green lands, he'd neffur seen anything like it. 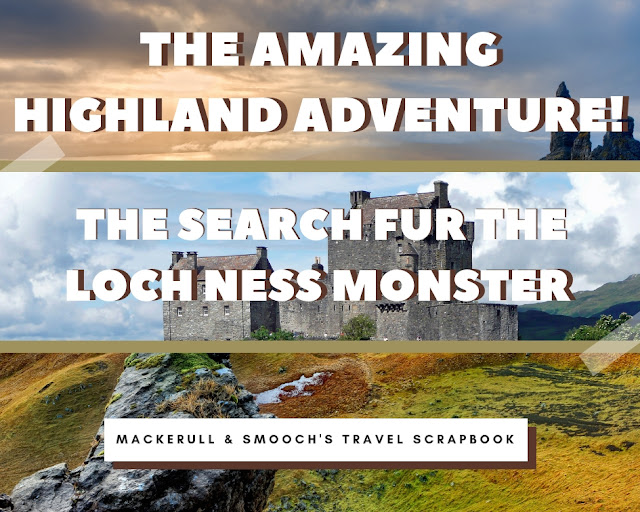 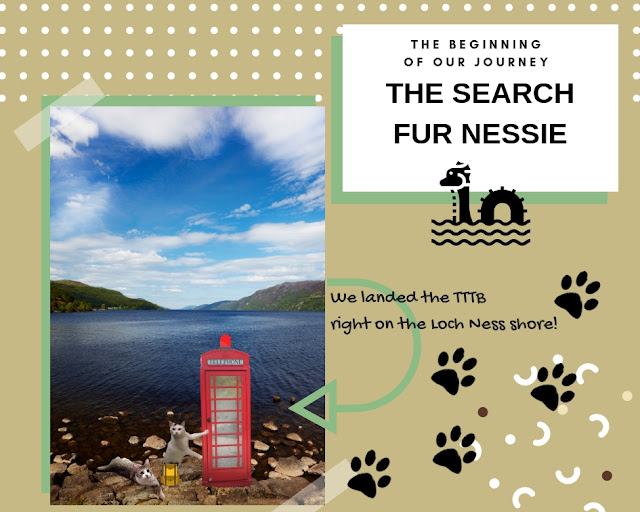 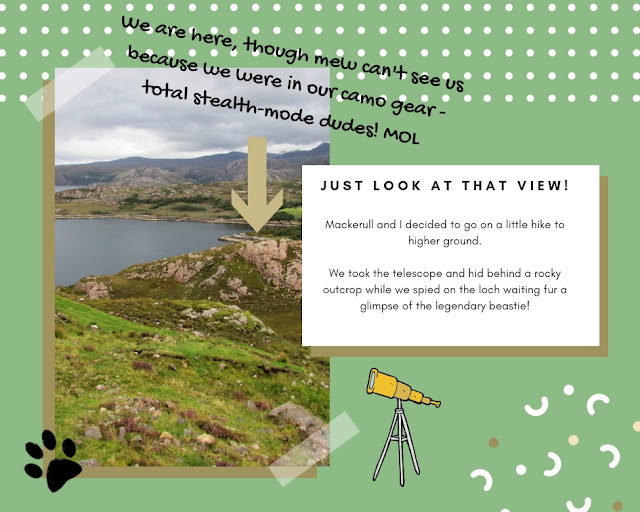 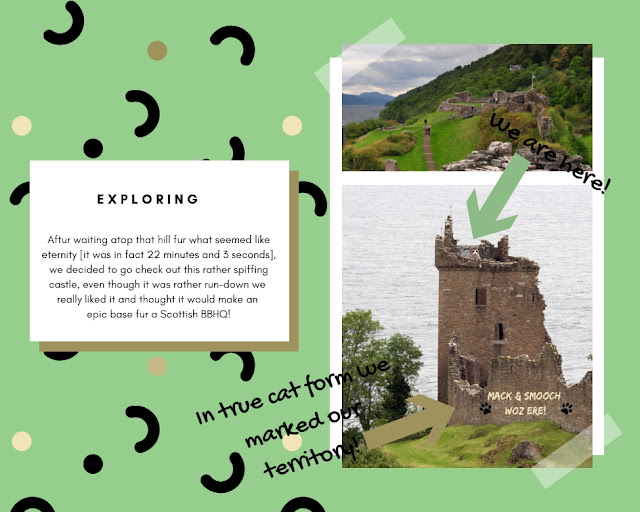 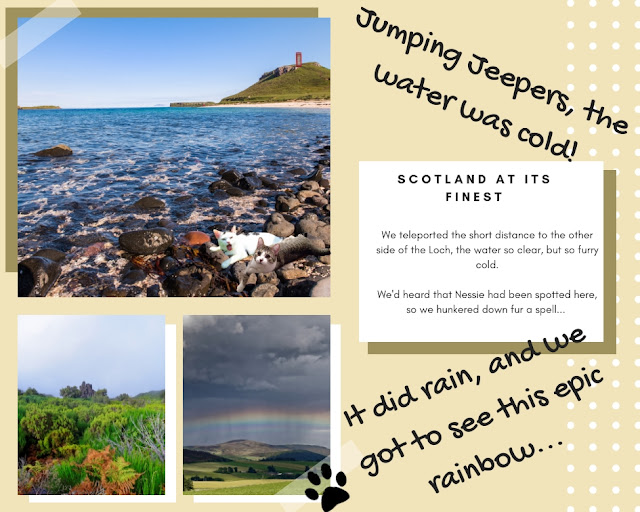 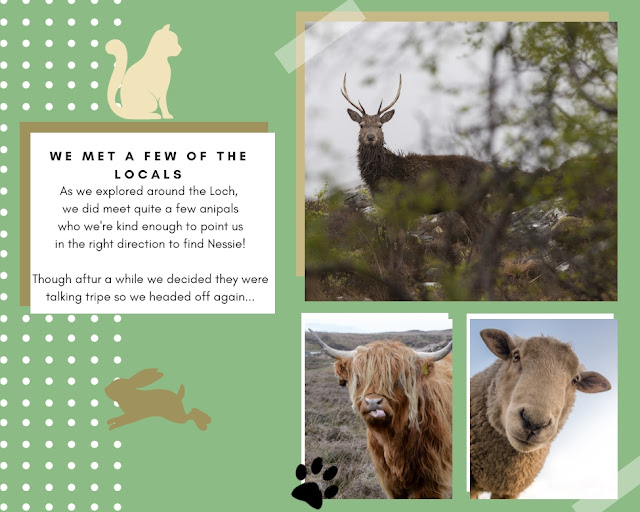 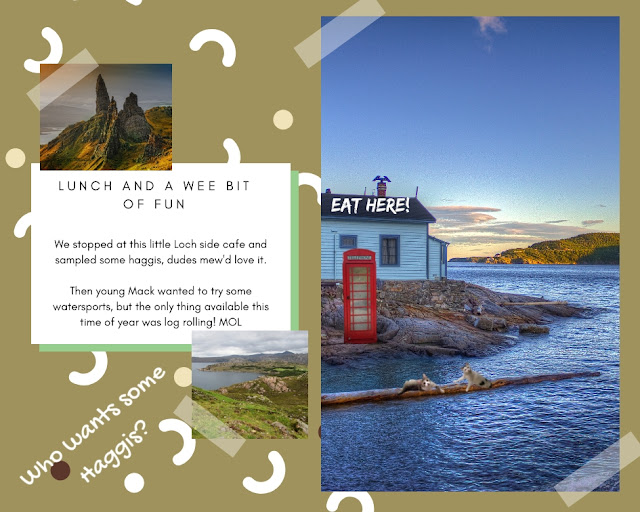 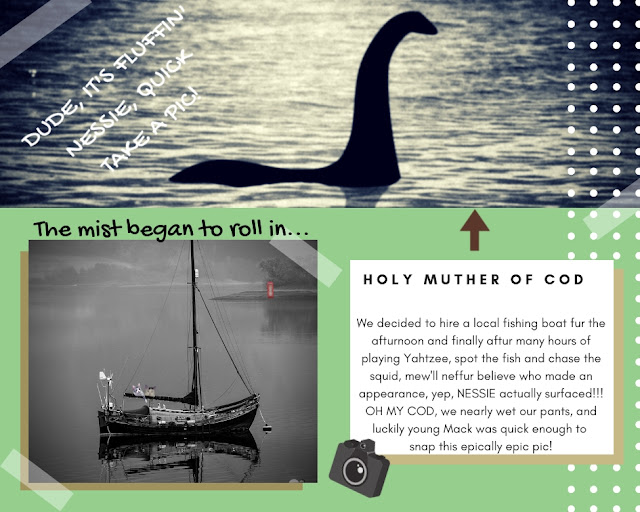 Mackerull and I had a blast, we ate haggis, got rained on, saw rainbows, climbed castles, hiked over mountain, moor, dale and lots of green stuff. We cruised around the loch, logg-rolled and drank plenty of nip scotch to keep warm! MOL

Dudes when I tell mew, Mack was exhausted when I finally dropped him safe and sound back in Trout Towne and he has a picture to prove we saw the legendary and infamous LOCH NESS MONSTER!

What a trip, and when I say it was epically epic, it truly was!

Thanks so much fur joining Mackerull and I on our epic Highland adventure and I'll be back before mew know it sharing another far flung destination, so hope mew can join me!

Furry quickly before I go, Shadow is joining me on a Jolly later next week as we head north fur a rather seasonal adventure, so I hope mew can join us fur that! 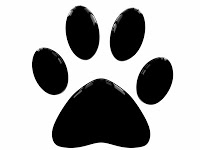