Welcome to The BBHQ Mid-Week News Round-Up ~ Part 4 of The Hedgehog Update & We Go on a Little Night Time Safari, Catnip Cushions Cause A Disturbance To The Peace, and BBHQ Haunted Happenings - The Poltergeist **PLUS** BITE SIZED BIRD TV FOR CATS

Epic Wednesday Greetings Furiends
Welcome to the Pet Parade and our weekly news round up!
And furst up in the news this week is;

Prickles must have gone into hibernation already as we haven't seen him/her for over a week now, although the youngsters are still coming.

In Part 4 of the BBHQ Hedgehog update we go on a little night time safari as Scooter, Wriggles and Snuffles appear for snacks, have a little snuggle while Melvyn and Fudge watch from the patio doors.

We've bought a hedgehog igloo last week, just in case they might need somewhere to snooze for the winter, although the P.A. was talking with her cousin next door and he thinks they've got a nice warm spot under one of his sheds, which if that's the case is fantastic as they will be very safe there.

The P.A. cleared out a lot of the dead plants, mew can see the full wheel-barrow on Monday's post, so she could put the igloo partly under the Irish tree. 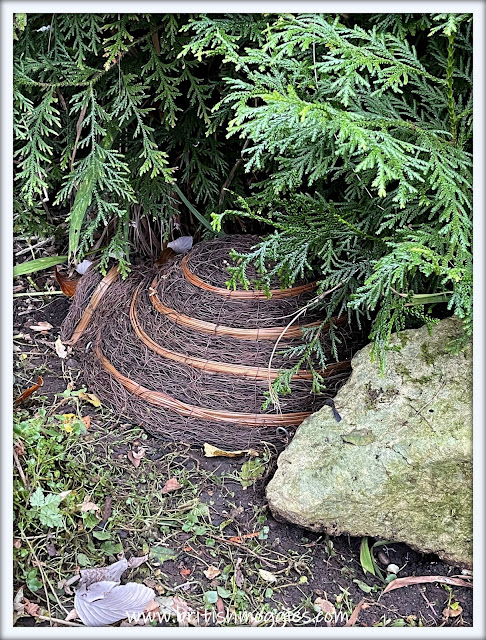 It's waterproof, although it doesn't have a bottom in it, so she gathered some dried leaves and put those in before using some metal tent pegs to hold the igloo in place. Also, the entrance faces the fence so the wind will be minimal should any little prickler decide to take up residence. Next, she's going to use some of the pine needles, fallen leaves and a few small branches to insulate the outside igloo further, though being partly under the tree will help enormously. We'll share a final photo next week.

Last night we only saw Scooter, but the good news is, he/she has put on lots of weight in the last couple of weeks. We'll check tonight to see if anyone appears but we're guessing it that hibernation countdown is nearly here.

Aftur setting it up on Sunday and leaving it to record on the motion sensor setting, the P.A. checked it on Monday and nothing had happened, so three YouTube Tutorials later to check they'd set it up properly which they had, it was placed back on the tree. So we'll check again and let mew know if it captured anything.

Next up in the news, if mew remember last weeks video of Fudge? This is what happened a little later...

Catnip Cushions Cause A Disturbance To The Peace

And even aftur the scrap, Fudge still lost as Smooch had purrsession of both the catnip cushions, OH DEAR!

And finally this week the P.A. is back with some more spooky tales, so get your cup of tea or coffee, sit back and relax! Muwahahahahahahahaaaaaaaa!!!

Hello lovely blogging friends and readers. Last week I gave you my missing earring theory, though that wasn't the only thing to disappear. The most troubling item was a sharp chopping knife out of my kitchen which vanished, never to be found again and around the same time, things really started to get weird.

Today I'm going to tell you about one really unsettling incident/episode with the poltergeist.

There is a dog-leg staircase in the barn and on the small half-landing, there always used to be a freezing cold spot in the corner, enough to make you shiver as you passed it, and it wasn't from the window as they're double glazed. And about 8pm every evening you'd hear the floorboards creaking and no, it wasn't the central heating, as it was off at the time because it was summer. It sounded like someone was walking along the landing to the bedroom door and back again, and it was a regular as a daily alarm going off, once when I had the flu and was in bed early I did see a shadow in the doorway which did freak me out a little.

But one of the really bizarre things that happened was in the middle bedroom, the same one where the purple toy car appeared, there used to be a double bed on the wall to the right as you walked in, and straight ahead there was a chest of doors which sat opposite the bottom of the bed. There was enough room between the bed and chest of drawers to put up the ironing board and use the space without falling over anything.

One day I went in and put the ironing board up ready to start working through the ironing pile and I stood as usual with the bed behind me. I don't know about you but I kind of zone out from everything when I'm ironing and operate on auto-pilot. I don't know how long I'd been there but as I half-turned and stepped back to grab a coat hanger off the bed I literally fell onto the bed, there wasn't the normal amount of space and at first, I couldn't figure out what was going off, as the headboard was still against the wall.

As I got up and walked around the side of the bed, it had moved 2ft away from the wall, now I know you're thinking oh someone moved it. No one else was in the house, and that bed was so heavy as it had 4 big drawers filled with all the spare bed linen; if I ever wanted to move it I had to sit on the floor, with my feet on the wall and push it with my back to even budge it an inch.

So who silently moved the bed straight forward 2ft while I was ironing? I don't know, I can't explain it, but normally if the bed was moved forward the headboard would fall forward as it wasn't attached to the bed, and it didn't this time. Spooky indeed.

Snowie actually stopped coming upstairs in 2008/09, and right up until she departed for the RB, on the immensely rare occasional she did go upstairs she'd never go along the landing or into that room.

I remember really struggling to push it back and cursing rather loudly, but that wasn't the scariest thing which happened in that room, if you'd like to know about what happened when I hung the new curtains I'd just made, let me know in the comments.

Tabbies of Trout Town purrlease scroll past this segment, we don't want to give mew nightmares.
We've just launched our TV For Cats on YouTube for cats who love nature but are short on time and it's purrfect to watch alone or with furiends as each episode is only about 5-ish minutes long, so won't interfere with napping, nomming or nipping.

With Beautiful Bird Sounds on YouTube this week, so check it out and see which feathered fluffers visit our garden.
How exciting?  Epically exciting and episode 2 will be live tomorrow.

That's us done for today, Amber will be back on Friday with another fab book just for mew, and if mew missed Monday's Colouring with Cats we shared a gorgeous mandala that can be downloaded. Plus Pandora shared a hilarious selfie on Sunday, and mew know how hard it is to get a good picture of Miss Speedy Pants! MOL