Wordless on Wednesday with Le Smoochie 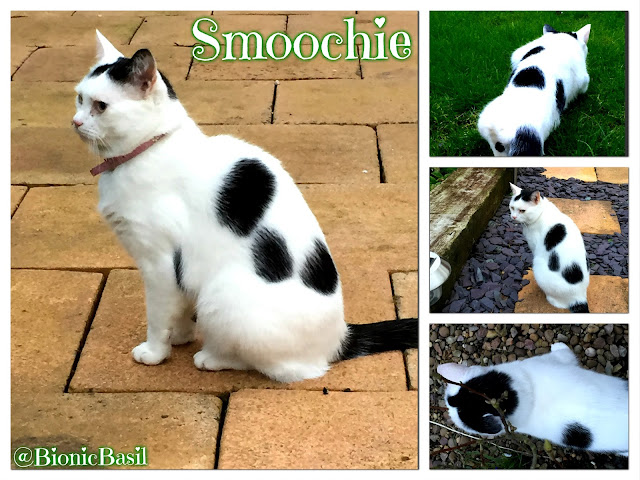 I think we should have called this post Wordy on Wednesday instead! MOL

Mew may remember a couple of weeks ago, we mentioned about Smoochie's little purroblem aka smoochinating in places he shouldn't.  Furry many thanks fur all the advice given, it was greatly appurreciated, and we received the 'litter attractor' two days ago and started usage of that straight away.

It's been a few days since he's gone where he shouldn't, paws crossed he's getting a little better, though not completely better but a vast improvement compared with a couple of weeks ago.  At least we're hopefully on the right track to curing him.  He's also been having a lot more outside time with the P.A. which we think is helping somewhat.

Another piece of the puzzle fur his behaviour has also come to light offur the last few days, there is a new unknown cat coming into the garden, as the P.A. saw it come right up to the patio doors and was very aggressive while Smoochie was sitting in the lounge looking out of the doors.  It really scared him, the P.A. then watched the U.C. [unknown cat] move into the courtyard and mark up all the places that we go.

After much discussion and deliberation we think that this garden usurpers' marking up around the courtyard and the garden has made Smoochie furry nervous and anxious and could be the root cause of the smoochinating purroblem, as after further investigation the P.A. found out that it started coming while she was away.

Now there's no way to keep The U.C. out of our garden as sometimes it pootles along during the day and others it's late in the evening, it's just too random.   There is no food for the U.C. outside as this is someone else's pet, not a stray so there's been no lure or enticement factor fur its visiting, we can only deduce that it's a territorial thing as it's a newcomer to the village.  The U.C. has also been spending a lot of time at Uncle John's next door - so it would seem we have a turf war happening and poor, little sensitive Smoochie is feeling intimidated and upset.

We need to come up with a plan so that The U.C. doesn't want to invade our garden anymore and the only thing the P.A. has come up with is to increase the height of the fence, which would then make it difficult fur us to get out and pootle down the field.... so we've reached an impasse right now...

Thinking caps are engaged, but if mew've got any advice we'd be really purrleased to hear it.