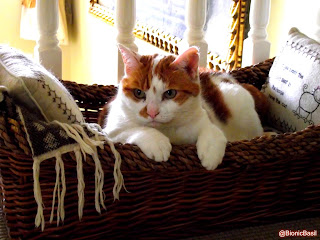 ... not many of mew will know this, but I am quite a shy and quiet kitty, [much like a snow leopard, mew only see me when I want mew to see me] keeping to myself much of the time, that's why I so enjoy Wednesdays as I get to spend time with my fellow bibliophiles, I can't tell mew how pawesome it is, like on so many levels! MOL

And as I'm so excited about my continuing Wednesday gig I decided to make a cute book club badge, so if any of mew would like it, please right click to save the image. 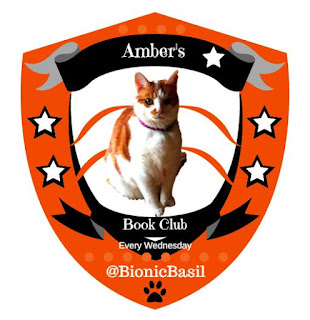 And now I think it's time to share this weeks selection.

The novel tells the story of Stephanie Harrington who is relocated with her parents from one planet, Star Kingdom of Manticore to a new one called Sphinx; here she encounters a sentient arboreal cat-like creature.  Aftur a near tragic accident Stephanie is saved and then  'adopted' by one of these indigenous treecats who is called, Climbs Quickly.

The treecats are telepathic which is great fun, as is the dialogue between the treecats. As the story progresses the bond between Stephanie and Climbs Quickly grows and this leads to an even bigger and more deadly adventure.  Obviously I'm not going to spoilerize anything fur mew, but needless to say this was undoubtedly a great read and I already have the next two books in my library waiting to go as soon as I've finished this review. That should tell mew effurything!

Thus far aftur book one, I see this as a highly purromising series and in my humble opinion it's definitely not just fur the young adult market.