Welcome to another Wurdy Wednesday in the Library.

Before I furget, mew may remember on Sunday that we started The Wurld-Wide Tour of

which is being kicked off by the fabulous Florida Furkids on their pawesome blog at:

So said hat is now speeding its way across the Atlantic as I type and should arrive on warmer shores early next week, if mew'd like to join in the tour purrlease do as the more blogs the woolly headgear visits the more money we raise fur our favourite kitty rescue and we will be monitoring its progress on our new page, here.

www.15andmeowing.com and www.dashkitten.com are hopefully joining in and www.erinthecatprincess.blogspot.co.uk has furry kindly offured a donation if we supurr-impose a pink version of the bobble hat on one of her gorgeous foto's - no purroblem we said, as yours truly has a pink one!! MOL 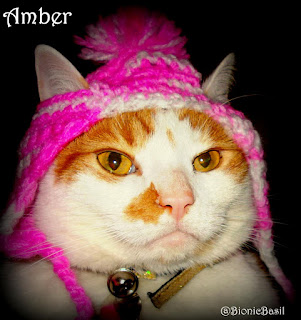 So paws crossed that we can raise a few £'s and help some kitties in need.

And aftur all my cuteness modelling one of the bobble hats and mew have too much of a cuteness overload happening, I think it's time to share this weeks selection. 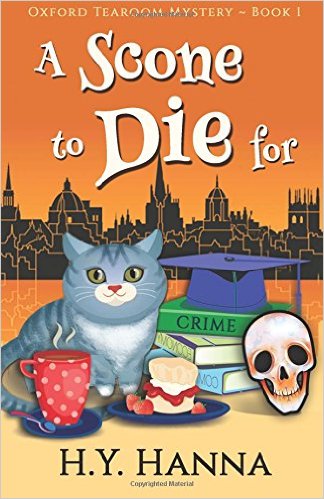 I have another furst to share with mew again this week, this is my furry furst cozy mystery written by a U.K. author!

FIRST IN A NEW SERIES!
When an American tourist is murdered with a scone in Gemma Rose’s quaint Oxfordshire tearoom, she suddenly finds herself apron-deep in a mystery involving long-buried secrets from Oxford’s past.
Armed with her insider knowledge of the University and with the help of four nosy old ladies from the village (not to mention a cheeky little tabby cat named Muesli), Gemma sets out to solve the mystery—all while dealing with her matchmaking mother and the return of her old college love, Devlin O’Connor, now a dashing CID detective.
But with the body count rising and her business going bust, can Gemma find the killer before things turn to custard?
********

My thoughts on the novel are in a nutshell:-  I really did enjoy it, though used to an American narrator as most of the audio books I choose to listen to are written by American authors; I have to say this was most enjoyable, the narrator oozed a Miss Marple type of vibe and being a huge Agatha Christie fan this entertained me muchly!

As I'm back on the cozy mystery genre, obviously there's a cute cat.  The cat is called Muesli and while most cats in books [except Bob & our furry own Basil] are usually fictitious Muesli isn't, she is the inspiration fur the author and mew can meet Muesli here.

Ok it's time to talk about the novel.  Gemma Rose, recently returned to England after abruptly quitting her high flying corporate job in Sydney, Australia decides to buy a tea shop in a quaint English village just outside of Oxford.  Only three weeks after the opening a rather brash American chap is murdered by a scone - yes hard to believe, and Muesli goes missing but mew know I won't spoilerize anything fur mew.

And that's when it all starts to get rather good.  Additionally there are four old biddies with bouffant hairdo's, who are also frequent visitors to the tea shop and they become amateur investigators assisting in solving the crime plus they add a good touch of comedy.  I had no clue who the murderer was until the big reveal aftur much twisting and turning of the plot.

In my humble opinion I think this would be an excellent addition to your library and a must read fur any cozy mystery fan and what makes it even better, there are another four books in the series, so mew know what I'm reading next! MOL

Gifs and Glitter Graphics www.glittergraphics.com
Other graphics created and used under paid licence www.canva.com and www.pizap.com
Posted by Basil and The B Team ~ BionicBasil ® at 02:00