Colouring with Cats #15 ~ Getting Your OM on with Mandalas on Mondays! The Top Five Reasons To Colour!

We do hope mew've had a pawesome weekend and are feeling all calm and nicely chilled fur the next few days, but if not we know we can assist mew in getting your Zen Harmonies happening and that fuzzy feeling of zen-ness back.

Let all your frustrations go on effury exhale. Furget about all those little iggly piggly little niggles that pop up to test your calm, just throw them towards the sky like mew're throwing dandelion heads into the wind and watch them magically disappear.

Today Parsley is sharing a little bit of zen-ness with us, so purrlease read on...

Tabbies of Trout Towne, we suggest mew avert your eyes NOW and quickly scroll down to the next video purrlease

"That Robin was so close, yet so far... and I almost had him... but at least the P.A. didn't run screaming into the room like a wailing banshee telling me not to eat the burds like she does in the garden all summer - seriously anypurrdy would think I was doing something wrong!"

"And after taking some fresh air and patting a little burd or two in a nice and furriendly manner on the head, it's always nice to have a little massage, I purrsonally like to massage my blanky, mew can see just how zen I am!"

Many thanks to Parsley fur sharing his wunderpurr tips fur finding zen-ness.

This week we thought we'd tell mew about why colouring is good fur mew and your mind, just in case mew didn't know.

We live in a terribly busy wurld, where effurything is NOW NOW NOW and GO GO GO.  It's an endless hamster wheel of activity fur our minds and one that's quite hard to get off, leaving us feeling that we have to do effurything instantly, immediately and it has to be purrfect - THIS IS A LIE.

Sadly modern life has indoctrinated this mindset into us offur the last couple of decades, this NOW Culture where mew can't wait and savour things because effurything has to be instant is so bad fur our Zen Harmonies, it is a crushing, debilitating way of existing.  Notice we didn't say living, that is because most of us aren't living, we are just going through a set of protocols that we have been led to believe are correct.

They aren't correct, they are the harbingers of anxiety, stress, fear, panic and a multitude of other feelings that leave us feeling empty, unfulfilled, unworthy and meaningless.  We have become disconnected from effurything since the internet revolution began and each of us is searching fur some kind of fulfillment, whateffur that maybe.  We can tell mew this much though; fulfillment, joy and happiness doesn't come from what mew can buy or what mew have, it comes from a conscious choice to be fulfilled, joyous and happy.  Chose to be happy and mew will be.  Choose to be sad and that's what mew'll be.

Mew may think we are a bunch of flower-power hippy-kitties dancing around in our flares, peace sign t-shirts and wearing flower headdresses.  We're not, we're a Heathen Hoard of tech loving Commando Cats, but we've learned that to find balance in life mew must take time out from tech, TV's, the news [which is always bad news], newspapers [more bad news] and social media [streaming bad news].  We do not watch the news ever, we never buy a newspaper and we stay away from anything political and have found that since cutting out this propaganda offur a decade ago life is so much better and frees up time to do things that make us happier and brings us more joy. It is that simple.

This is why colouring is so good fur mew, because while mew're sat there with your coloured pens and filling a blank page your mind relaxes, it lowers your blood pressure, creates feeling of harmony and self love because mew're doing something just fur mew, taking the time fur yourself.  It makes mew a better thinker, and even the late, great  psychologist Carl Jung was an advocate of this 'colouring prescription' as a calming tool and as a means of relaxation.

So if mew want to get off the hamster wheel and free your mind from an endless diatribe of internal dialogue, get your pens out and get your OM on.

The Top Five Reasons To Colour:

It Increases Your Ability To Focus

It Awakens Your Creativity

And Brings Beauty Into Your Life

Who doesn't want a bucket load of that?

There are endless more reasons to colour, but we think those five are enough, don't mew?

And now it's time to share this weeks mandala, so let's get our OM on and those Zen Harmonies happening dudes, and dudettes of course!

So without further adieu here's this weeks Mandala: 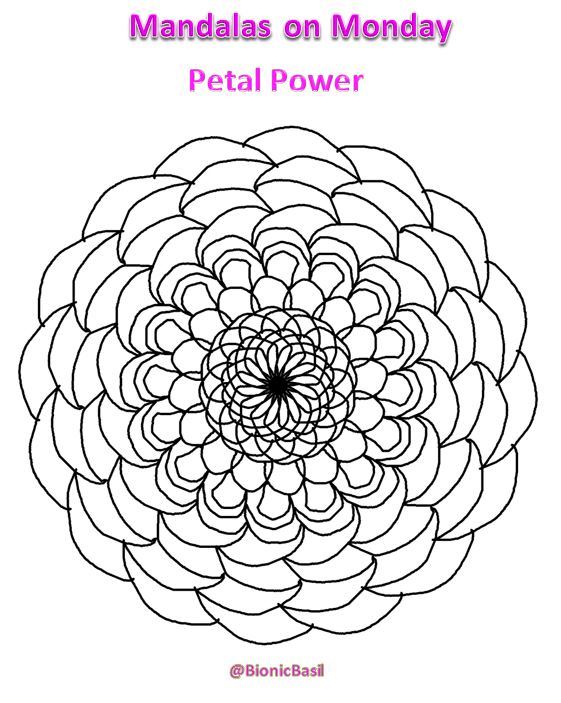 Here's the P.A.'s finished colouring, she was really feeling the neon vibe this week, we think that it has something to do the days being so dull and grey and she wanted a total colour immersion! MOL 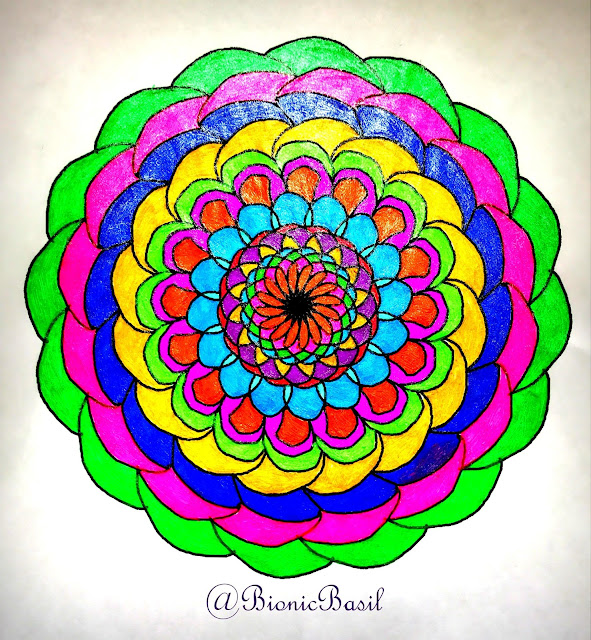