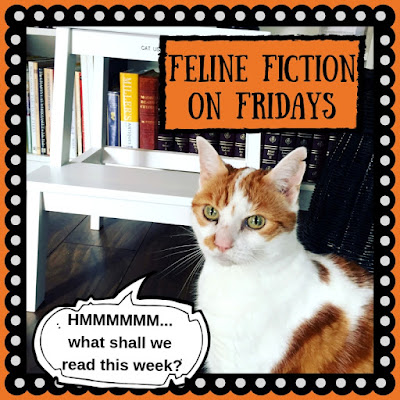 Mew'll neffur believe what happened this week, there I was minding my own business [well sort of] in the library when Pandora hurtled through the door yelling in her odd, little foreign accent. "Amber! Amber! Amber!" [It actually sounded like AMM-BEARE - really it did!] 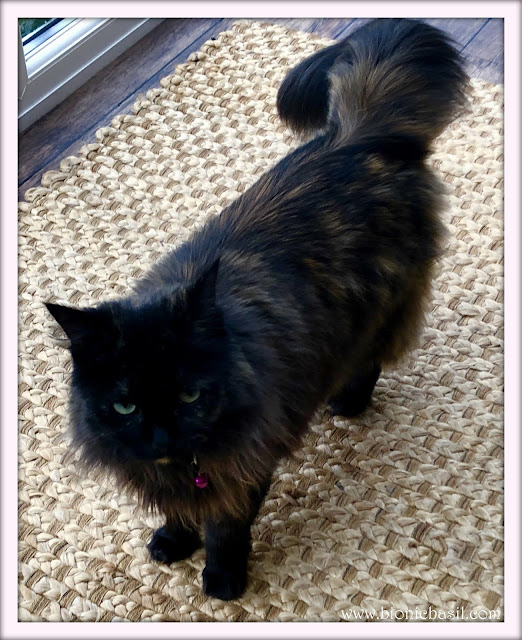 I peered at her from my rather toasty sofa, [it now has a heated pad under my cream rug] as I replied. "Yes Pandora, how may I help mew?"

"The BBHQ Catmas cards 'ave arrived!" she beamed at me and dropped a box on the floor. "I just spoke to Smooch, and he said that it vas Parsley's turn to send them out."

I nodded, knowing exactly where this was going. "Uhuh!"

"So I vent to find Parsley, and he said that it vas Fudge's turn to send them out!" she continued.

"Uhuh!" I replied as my eyes narrowed by the second.

"And Fudge said it vas my turn to send them out," she said. "But I don't 'ave any addresses, and as mew're the most supurr organised I thought that mew could send them out as they're going all offur the wurld and..."

I waved a paw to silence her, "And mew thought muggins Amber would send them out?"

She nodded at me most enthusiastically and said. "Of course, that is it exactly!"

"UHUH!" I replied through clenched teeth. Why am I always the one who gets these jobs? then suddenly I had a brain-wave.  "Go find the P.A., she's really, really busy at the moment and they say, if mew want a job done ask a busy purrson, she's your gal fur sure... now beetle off because I'm reading!" 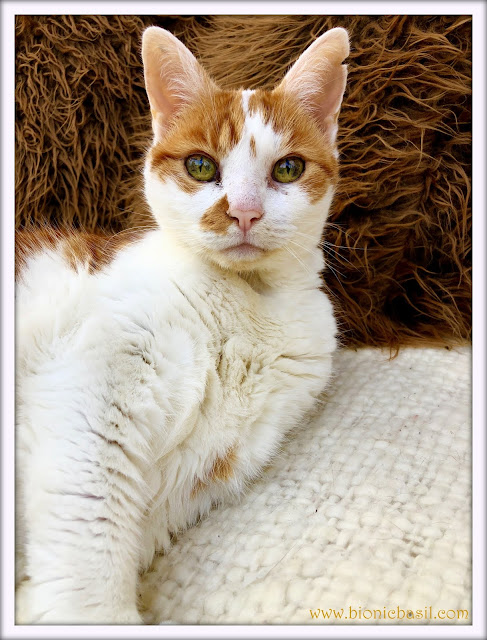 And my top tip fur all mew kitties this week, is:

This week I'm sharing not one but three books...

There’s something special about Max. He may look like your regular ginger flabby tabby, but unlike most tabbies, he can actually communicate with his human, reporter for the Hampton Cove Gazette Odelia Poole. Max takes a keen interest in the goings-on in their small town, by snooping around with his best friends Dooley, a not-too-bright ragamuffin, and Harriet, a gorgeous white Persian. Their regular visits to the police station, the barbershop and the doctor’s office provide them with those precious and exclusive scoops that have made Odelia the number one reporter in town. But when suddenly the body of a bestselling writer is discovered buried in the last Long Island outhouse, and a new policeman arrives in town to solve the murder, it looks like things are about to change in Hampton Cove.

When famous eighties pop star John Paul George is found floating face down in his pool, Hampton Cove’s premier sleuthing tabby Max and his feline friends are on the case. Soon they’re chasing leads and following clues, helping their human Odelia Poole, reporter for the Hampton Cove Gazette, solve the murder. Meanwhile, new cop in town Chase Kingsley has his own problems to deal with. An old scandal threatens to get him kicked off the force. And even though Odelia and Chase don’t always see eye to eye, she decides to help him clear his name, even if it means keeping Chase’s cat Brutus, Max’s self-declared nemesis, in town.

Blorange tabby Max and ragamuffin Dooley are on the case again. This time a world-famous reality star has been found murdered in her own bed, and it looks like the crime just might be terror-related. The Kenspeckles, stars of the well-known reality show Keeping Up with the Kenspeckles, are in town to film a new season of their show, so the case soon turns into a complete media circus, with the Kenspeckles insisting the entire investigation is filmed for their show. Odelia Poole, Hampton Cove’s premier reporter, teams up with Detective Chase Kingsley to catch the killer, but with cameras filming their every move, and every Kenspeckle a suspect, they’re not making a lot of progress.

I've been meaning to share these fur a while, but as I've had an influx of books from publishers, these have had to wait, but today I finally get to share them with mew - woo hoo!

So what did I think? I actually loved this series, it's witty, the characters are fun, the cats are really cute, there's plenty of conflict, action. And the plot, twists and turns like a roller-coaster keeping mew turning those pages.

Each book is really fun, and there are echoes to real-life famous peeps in the most tongue-in-cheek way, mew'll recognize exactly what I'm saying from the book blurb, but obviously I can't point out the obvious! MOL

There are 7 books in total, so I've got another 4 to get my mittens on and I really can't wait, as I'm saving them fur my Catmas break.

If mew asked me who my favourite kitty is at the end of book 3, I'd have to say it's Brutus, who's rather misunderstood and deep down is a real softy, but mew know I won't say anymore than that, as I've already spoilerized it and mew know how much I hate that! MOL

I think this is a really great series and if mew love a kitty cozy mystery then these will be right up your alley!

*    *    *
Sadly it's time fur me to say BFN or bye-fur-now as mew know the drill, so many books, so little time and I'll be back next week with another specially paw-picked book just fur mew. And don't furget that all my previous reviews can be found on my Book Review page, plus if mew'd like an exclusive Library Card fur speshal access to my library, just email me at: