Many apologies for quite literally dropping off the planet 3 weeks ago - 10th June to be exact.

The P.A. had a rather bad accident; she fell through a ceiling, landing on her back, and is still convalescing.

She had the stitches out of her leg and is improving although the impact really did knock her for six and healing is taking a lot more time than furst anticipated. She is still under the care of the Doctor and is taking all measures to recupurrate as fast as pawsibly pawsible.

Many thanks all fur the well wishes, POTP and messages; my goodness has she ever needed them!

Prior to the P.A.'s accident, we teamed up with the amazing Ann from the pawesome blog Zoolatry to be part of a wunderful initiative which starts on the 21st July: 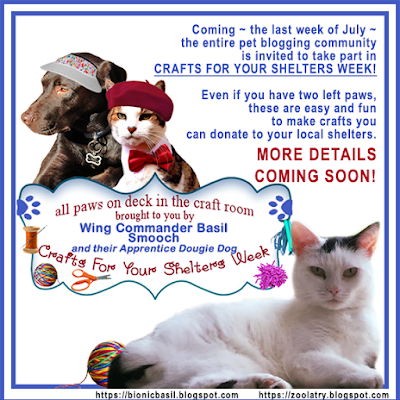 So don't furget to mark that in your diary as we'll be sharing five different projects for mew to make fur your local shelter/s; from the easiest no-sew cat toys to slightly more advanced quilted snuggle mats, and we really do hope mew can join us to help make shelter life a little less bleak fur some of our less fortunate anipal furriends.

Let's join paws and create something pawesome together!

And on that note, we must go check on the P.A. and make sure she's still wearing the bubble-wrap suit with extra impact bubble surround just in case she needs to move rooms.

We won't be sharing any new posts for at least another week or so, but we will try to share some of our previous posts just to get mew warmed up fur our imminent return to the blog'o'sphere'.

Also just before we pop off, mew know that it was Fudge's birthday on 21st June, and coming up on the 4th July it's Melvyn's 2nd Birthday; Independence Melvyn Day ~ so we are planning a joint pawty fur later in the month fur the pair of them [Cod Help Us All!]

Thank mew once again fur all the POTP and well wishes