Wordless on Wednesday with Parsley Sauce 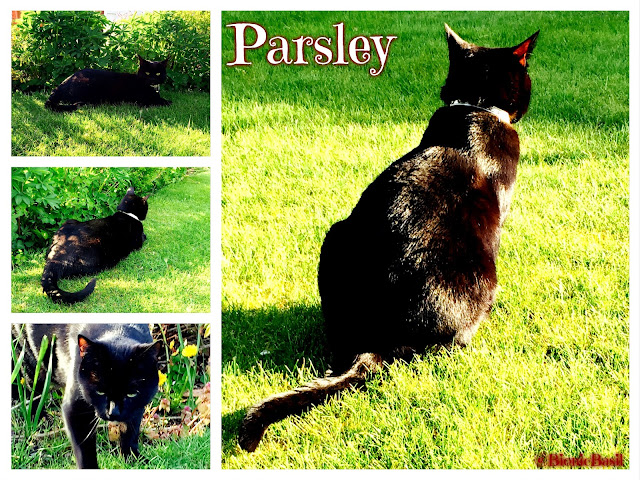 Mew may be wundering about the 'sauce' bit - let me explain; when he furst came home from the rescue centre he was called Parson's as he has a slight white ring around his neck, but the P.A. didn't like that name much and really wanted to call him Magic or Midnight or Raven etc... anyhoo mew get the picture... so when he came home and she tried all the names she liked on him and after a few days decided none of them really suited him.

Herein lay the purroblem, as she really hoped one of the names would be right, so after conceding defeat and he was still called Parson's she suddenly had a brainwave to call him Parsley, not too different from his existing name but she liked it so much more, so Parson's became Parsley and offur time that morphed into Mr Sauce as in parsley sauce, and then much to Parsley's chagrin the P.A. plays a game with him; effuryday he is a different sauce.  So here is the last weeks list:

and today he is, of course

As mew can imagine the list is effur evolving, so if mew have any sauces mew'd like to share with us fur future reference in the Mr Sauce game, that would be terrifically pawesome! MOL

Graphics used under paid licence  www.pizap.com
Glitter Text  www.picasion.com
Posted by Basil and The B Team ~ BionicBasil ® at 04:00