The Pet Parade Blog Hop No: 158 ~ Hosted by Rascal & Rocco Co-Hosted by Basil & Love is Being Owned By A Husky & Barking from the Bayou 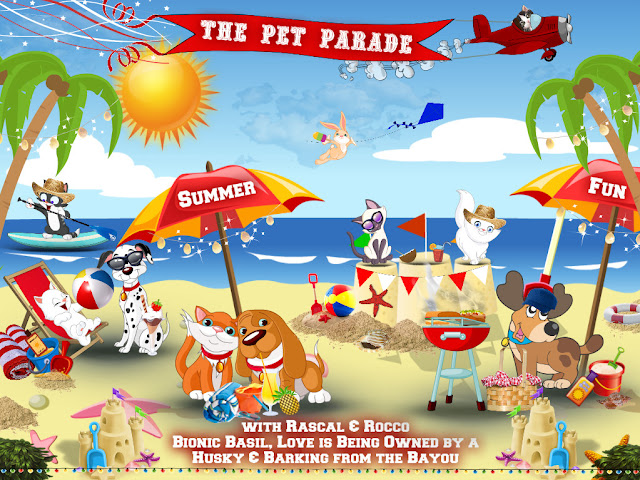 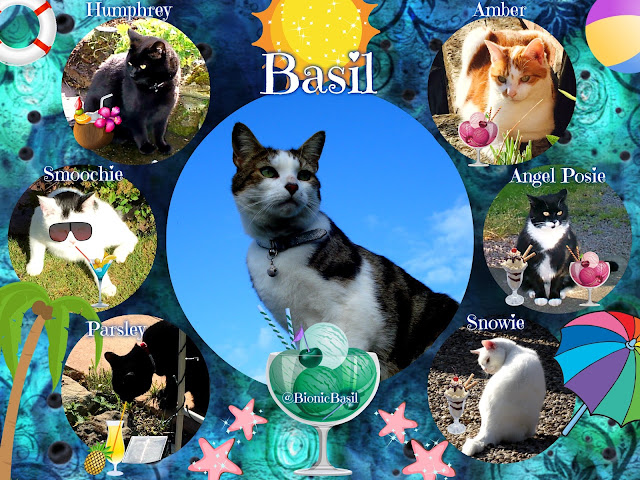 Welcome to another pawesome Pet Parade, as mew can see it got a little scorchio again this week, so we had some most refreshing refreshments.

Amber, Snowie and Angel Posie decided they needed the supurr chill factor of ice cream, and mew maybe wundering why Posie has two... she said and I quote, "Basil, mew don't have to wurry about calories in the afterlife, get me another would mew?"   What could I say to that!! MOL

Parsley, Smoochie and Humphrey hit the cocktail bar... hmmmmm... it wasn't long until they were all napping in a hammock in the shade.  And some of mew may have noticed Humphrey's beverage, I can confirm that is a coconut niptini shaken, not stirred and yes they are utterly delicious and smell divine too.  I did sample a couple and have to say, this is my new summer tipple.

In other news, the lucky give-away winners from our 3rd Anniversary Pawty FYI your goodies have been dispatched and are en route post-haste as we speak type.

Just in case mew missed Monday's post: we are taking a little break from our usual programming schedule until later in September, so that means:

Fast, Furry & Dangerous will resume on 20th September when the final five episodes will conclude this epic, claw-biting tale.

Amber's Wurdy on Wednesday will resume on 21st September

The Pet Parade & Sunday Selfies will remain as per normal.

In the meantime, mew will have plenty of Flashbask Fever posts to keep mew entertained as we relive some of our older stories in BionicBasil Revisited.  There are 3 links below if mew missed this weeks selection.

Oh and before I furget, next Wednesday it's Parsley's birthday and he's having a little [yeah right] pawty and he's got a give-away happening too, as mew know what he's like - anyhoo one of the give-away prizes is too, too funny fur wurds, all I'm going to say is sea monster and let mew guys find out next week.  Mew can leave your guesses in the comment form and we may give mew a few more hints! MOL

So do put that in your social calendars as the give-away is not to be missed, we're shipping world-wide too.

Thankful on Thursday with Basil & a Crosswurd #3.5

We'll be back  with our usual Selfie Selection on Sunday, so hope mew can join us then.

Graphics created used under paid licence www.canva.com and www.pizap.com
Glitter Text  www.glittergraphics.com
Posted by Basil and The B Team ~ BionicBasil ® at 04:00