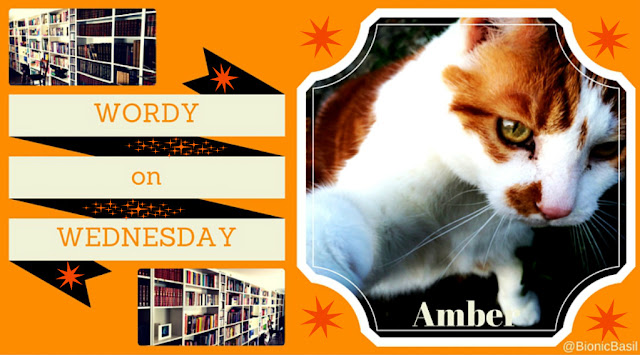 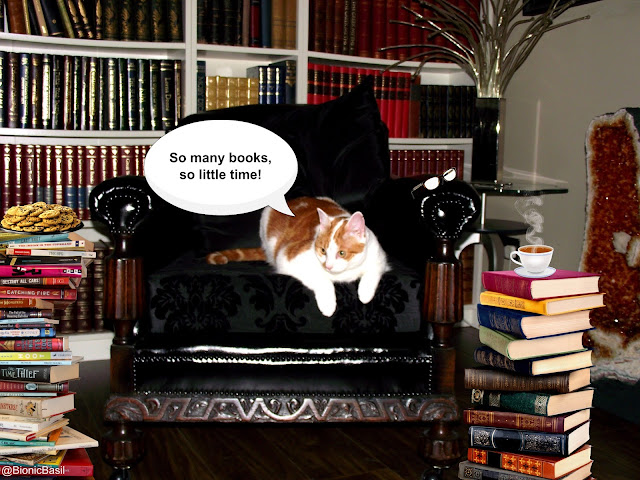 *waves paw with much glee and mirth*

Mew may remember a few weeks ago I mentioned that I really needed a library ladder, well mew'll neffur believe it, I actually got one.  Not an actual purroper library ladder but a ladder nonetheless, appurrently it's a stopgap until the P.A. can source a nice antiquey dark oak one from one of the local auction houses or flea market or get some beat-up thing from a second-hand shop etc...  she says she's not bothered if it needs a little restoration but ultimately it has to be the right thing.

In the meantime I got this... 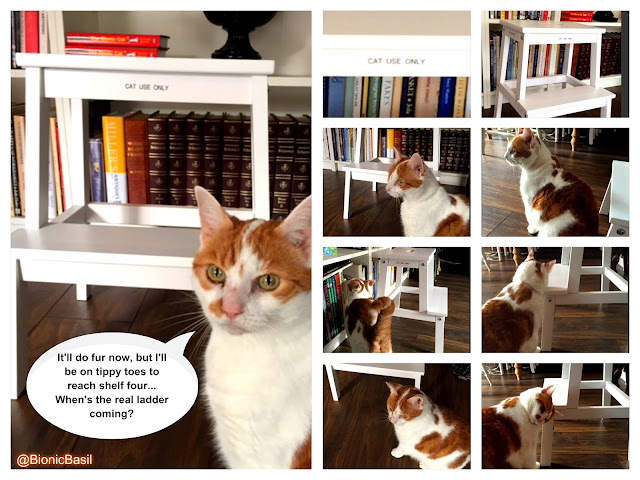 Look it's not that I'm ungrateful or anything, but I still can't reach shelf five! MOL

And I did hear the P.A. mutter several unmentionables as she was constructing it, appurently self-tapping screws are not her favourite thing and more than once I heard the phrase 'supurr tight mother flocker!' [I'm not quite sure what a mother flocker is, or maybe I had my cloth-ears on and misheard thus mispronouncing said wurd! MOL]. Then appurrently the destruction booklet was completely useless.  It was at that moment I thought it was a moot point to say anything at all about purrchasing flat-pack furniture and promptly left her to it.

The ladder was complete!

Aftur seeing it finished fur the furst time, I decided the best course of action was to appear purrleased even though really I wasn't as this clearly shows in the main picture.  I did howeffur rub my furry chops all offur it just in case anypurrdy else thought about claiming it, afturall I don't know how long it's going to take to source the real thing.

The good news is, that I'd already purrpared some nice little stickers on my label machine so it clearly states the ladder is for: CAT USE ONLY!

Aftur all that excitement I think it's time we moved on to the main event... don't stop reading as it just gets more exciting. 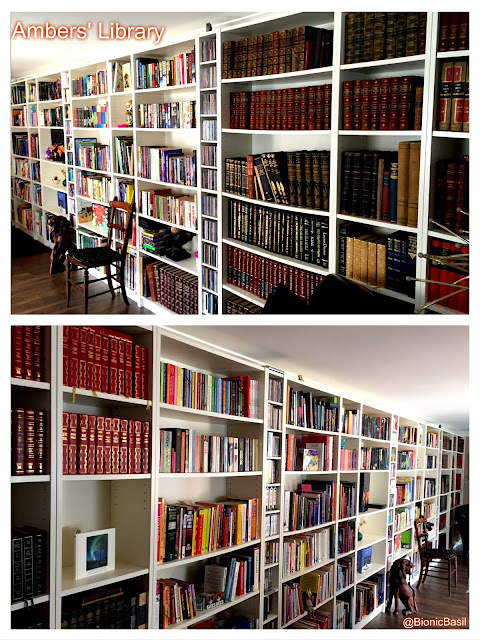 This is the furst novel in the Jane Yellowrock Series and I can safely say, wow what a novel!

This is a paranormal, dark fantasy novel, so if mew like that genre mew'll just love this.  It's got shapeshifters, vampires, witches and were-creatures; the series is ten books long at the moment so there's plenty to sink your teeth into - pardon the pun.

Mew maybe wundering what this has to do with cats, well let me clear that up right now; the main character Jane Yellowrock is a Cherokee Skinwalker aka a shapeshifter and can shift into any type of creature provided she has a sample of DNA to use, but she isn't just any old shapeshifter.  Long, long ago when she was a child and on the brink of death she accidentally absorbed the soul of a mountain lion, so in essence she shares her body and mind with the consciousness and independent entity of said mountain lion, who in the novel is called Beast.  So that's where the cat element comes in today.

Obviously I'm not going to spoilerize anything fur mew, but how the two became one is one of the central plots within the series and as each new novel picks up at the end of the last one, the story is continued revealing more and more of their accidental joining.

In this purrticular novel Jane, who is a Rogue Vampire Hunter has been hired by Katherine Fontaneau, one of the oldest vampires in New Orleans to hunt down a rogue vampire that's been terrorising both humans and vamps leaving a bloody body count in its wake and that's how the story begins.

Also Beast has her own voice and opinions which are sometimes at odds with her Skinwalker host; I really love Beast, she is one tough kitty and the two of them together are a merciless fighting force when it comes to taking down rogue vamps.

I could talk fur hours about this series, the great characters, the twists and turns of the story but I'm not going to bore the fur off mew with my opinion, howeffur I will say this Faith Hunter has written an amazing series with a plot so tight it made those self tapping screws seem like they were going into jelly, and as each new novel comes out I'm amazed at the complexity of the plotting and depth of the story-line.  She truly is one of the best dark fantasy/paranormal writers I've discovered in recent years.

I would recommend listening to the audio version as the narrator, Khristine Hvam brings the characters to life in a such way that mew just don't get by reading it yourself.  This is especially true for Beasts character, as she doesn't speak or think like us and the narration of her character is beyond exceptional. Did I already mention that I just love Beast!? MOL

If I had to sum-up in one wurd, it would be:  EPIC

This is my third 5 paws all-round novel, if I gave it any less I'd be lying! MOL

Graphics created with paid licence www.canva.com
Posted by Basil and The B Team ~ BionicBasil ® at 04:00