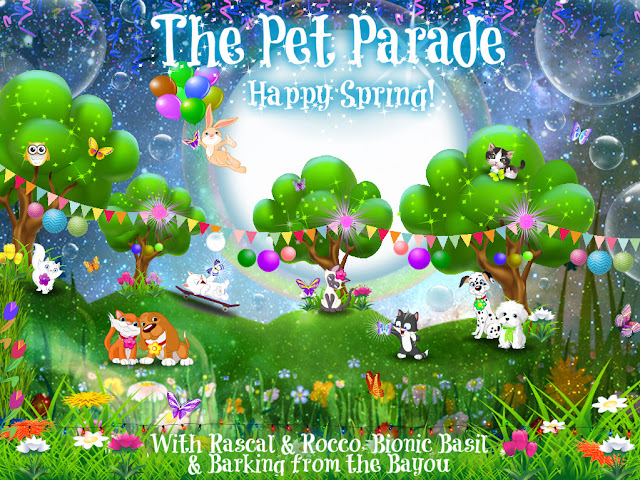 Well finally the snow has all gone and the frozen pot has thawed out, and thus far we can't see any cracking, so woo hoo fur that as it was all the way from Patagonia and is rather old too, so completely irreplaceable if broken **Big Sigh of Relief**

Amber is still snoozing on the new supurr-soft, teddybear blanky, only moving fur food, water and litter box visits... OMC will she be able to drag herself off it to do next weeks book review?  That's the burning question on effuryones lips here at the BionicBasil HQ... in fact we've got a poll happening below so cast your vote on whether mew think she'll make it or not... 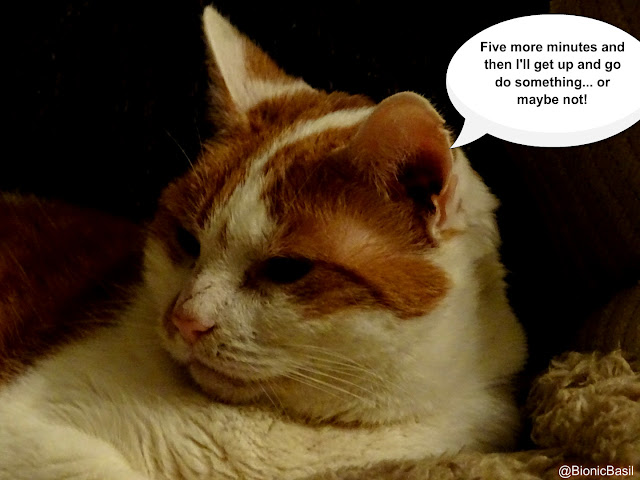 Will Amber Get Next Weeks Book Review Done? Vote on whether she'll be able to get her caboose back in the library in time!

Moving on now,  Pandora is getting rather antsy as she's despurrate to share her latest top kitty themed fashion item fur your pet hooman, and it is rather fabulous so hopefully she'll be here next week with another Fashion with Felines post.

She did want tomorrow but Parsley said. "Oh fur fluffs sake, I'm here tomorrow with another Pet Peeves as it's been a couple of weeks now and the kitties of the wurld need to be able to vent their mounting frustrations!"

"But I need to share my latest favourite fashion find!" protested Pandora.

"Is it a new hummer or tank or even an atv?" Parsley asked. "Has it been blinged or customized?"

"I didn't think so, in that case mew can have next Caturday!" he smirked. "Tomorrow is mine sisfur, so get in the queue!" 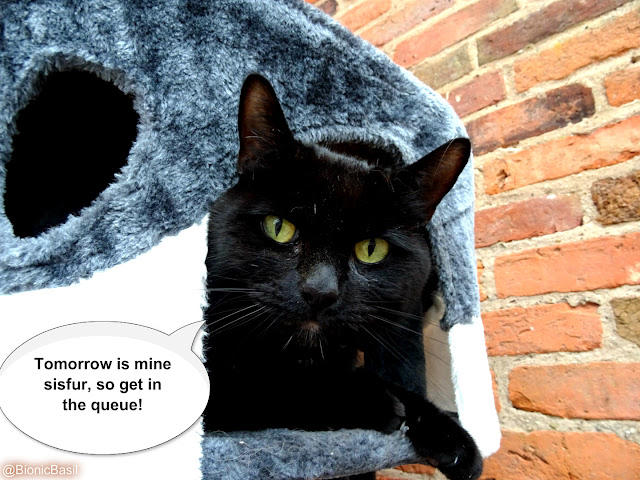 It seems like our mild mannered, chilled out Mr Sauce is finally  EXERTING HIS AUTHORITAH! MOL

I can't repeat exactly Pandora what said as she started babbling in her odd, little foreign accent but from what I could gather, she mentioned something about a box and Parsley... oh heck, I really hope she isn't going to bring the legendary and mythical Pandora's Box out of the archives that's been safely stashed fureffur on Level 13 of the bunker???!!!  **sharp intake of breath** this could be bad, really bad... Actually, how did she even know it was there??? [Note to Self: Question Pandora immediately]

In other news, Fudges ginormous FLOOF tail exploded to twice its normal size the other day while he was just randomly ambling around the house, and when I say it was a sight to behold, it was a SIGHT TO BEHOLD [it's so epic we think it deserves its own theme tune] and that peeps should wurship the giant floof, send it gifts and pay homage to it weekly.  [Secretly, we think it is actually a co-joined twin but we just haven't found the face yet!!!! MOL] 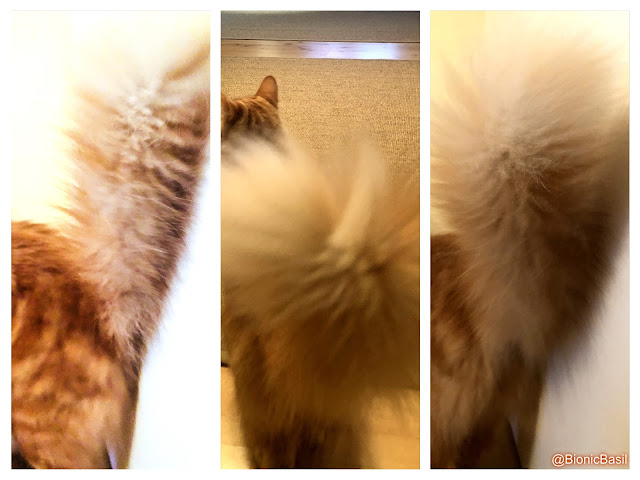 So if mew need some supurr floofiness in your life, Fudge has got mew covered, or as we say in B Team speak...

'Fudge has got your six dudes!'

Sunday Selfies ~ How Saucy Are Mew?

Parsley will be here bright and breezy in the morning to help mew alleviate all your pet peeves and frustrations, and then we'll be back with our usual selfie selection on Sunday, so hope mew can join us then, in the meantime we wish mew all an epic weekend

Graphics created with paid licence www.canva.com and www.pizap.com
Posted by Basil and The B Team ~ BionicBasil ® at 12:05