Guys, as mew know Basil is now an Angel Kitty and we're not coping furry well with his departure. The P.A. is broken, and struggling to come to terms with it as we all are.

We knew that losing Basil was going to be really tough, but we didn't realise just how horrendously tough it would be in reality...  as mew know he was in charge, he was mission control, he was THE commander and he was the glue that always kept The B Team fully oppurational... offur the last week we've found ourselves falling apart quite literally.  When we've lost previous B Team memfurs, Angel Posie in 2015 and Snowie & Humphrey in 2017 Basil was the one who rallied us around and kept the wheels turning, he was the one with the voice of reason, the voice of wisdom and the one with the power who made it all better again, but now that he's gone we are really struggling to reconcile our feelings and emotions.

Basil always had a plan, he always knew what was going off and he always made sure that effurything was taken care of... he neffur got flustered and always kept calm and carried on...  and in all honestly we can't think straight... the entire schedule has fallen down the side of a mountain and lays smashed in the bottom of the deepest abyss, and we don't know how to proceed from this point forward without him.

Mew see we were just wurking on a relaunch of his original book Basil the Bionic Cat, we'd had a new cover designed, lots of fun new graphics fur inside and a complete new look, plus all the other B Team Adventures that we've been wurking on all year to turn into novel's too - and now with Basil at the Bridge, we don't know what to do. We feel lost.

It's Pandora's birthday tomorrow, her furst propurr birthday with The B Team on the blog, she'll be 3 and although we'd love to celebrate, we're just not in the celebratory mood if that makes sense.

We're about at the halfway point posting our latest adventure, The Clockwurk Labyrinth, and we feel little inclination to continue.

We feel like we're being sucked down that whirlpool again...


So to help us come to terms and deal with this humongous loss, this happened earlier today...

A Kick Up The Backside From THE RB

Meanwhile at the Rainbow Bridge... 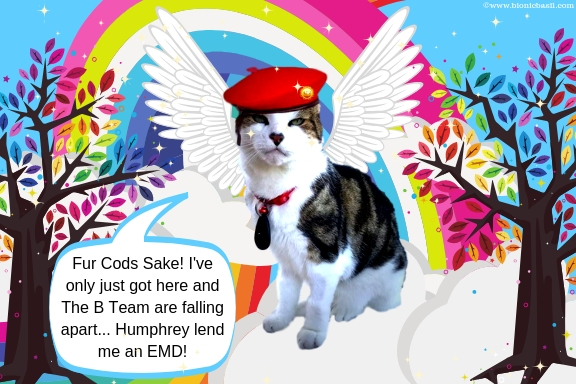 [Fur those of mew that aren't aware, an EMD aka Earth Me Device - is a small watch-like gadget which Humphrey invented that allows allows Rainbow Kitties to be restored to a fully corporeal state in the earth dimension.]

I, Angel Basil have been listening in to radio chatter from Mewton-Clawson on the speshul Transceiver radio fur the last week and purrlease know I'm so so furry sorry fur the sorrow and pain my departure has caused, if I could have changed it mew know I would have done in a heartbeat.

I turned to Angel Humphrey and said, "Dude I know this is against the rules of The RB but I have to go back!"

Humphrey looked at me, his expression solemn and he sighed heavily. "Basil the rules are furry clear..."  [He was actually expecting this, he knows me too well.]

"Humphrey lend me an EMD and get me back to Mewton-Clawson stat dude, mew've seen what's happened offur the last week, I need to go sort it!" I said.

He passed me the small device, I deftly strapped it on my wrist and grinned. "Dude I feel epic, now get me back home." And then I added. "Smoke me a sardine, I'll be back fur suppur!"

He nodded and pointed towards an ancient oak tree sitting majestically on top of a small hill.  "There's a hollow under the tree, go inside and take the 4th door on the right, it's red."

I was at the base of the oak tree in moments and I let my paw slide across the age-old bark, it felt warm under my touch and I smiled. Pushing aside a curtain of trailing roots, I saw the hollow camouflaged between giant exposed roots and I stepped inside a warm earthy warren. Glancing around I saw all the doors and headed straight fur the one Humphrey mentioned, I reached out a tentative paw, gripped the worn handle and opened it.

There before me was tunnel glowing in all the colours of the rainbow, it spiraled down and down and down further than I could see.  "Well here goes!" I said to myself as I launched forward. A few moments later I landed in the Control Room, it was pitch black and dust sheets covered effurything.

I ambled into familiar the corridor, that too was pitch black and it felt cold, like nopurrdy had been there fur a while. "What the fluff!" I murmured and reached fur the light switch on the wall.  My paw passed straight through it and I tutted myself suddenly remembering to turn on my EMD.

The lights came on and so did the alarm.

I walked to my office and sat at my desk flicking on the brass lamp and waited. I didn't have to wait long and I smiled to myself as I heard Parsley, Smooch, Fudge, Amber and Pandora come running down the corridor towards my office aftur the alarm had been switched off.  I could hear the sounds of weapons being readied, and guys mew have no idea how that warmed my heart.

"Somepurrdy's in Basil's office!"  I heard Smooch whisper as they slowed and edged along the corridor towards my open office door.

Five seconds later I had ten guns pointed directly at me and I grinned at my team, I'd taught them well, I was so proud.

Amber screamed, and the rest of the team just stared wide-eye and mouths agape as their weapons slid to the floor with a clatter.

I held up my paw and Amber stopped screaming. "Dudes, I haven't got long and I shouldn't even be here..."

I didn't manage to say anything else as I was surrounded in seconds and squashed beneath my team as they hugged me and all spoke at once.

"Dudes, DUDES!" I yelled as paws gripped me tightly. "Dudes, I only have a few minutes!"

Gently I took effurypurrdy's paws in mine and said. "What the fluffing fluff has been going on the last week?"

Effurypurrdy started to talk at once, tears were streaming down their faces and their paws trembled in mine. I took a breath and said gently. "I'm here to tell mew I'm ok, in fact I'm better than effur but I know that mew guys aren't, I miss mew all terribly but I can't stay... I will be back as soon as I've done my probationary period at the RB but in the meantime I need mew all to get a grip!" I paused and then said. "I need mew to keep calm and carry on, that's what The B Team does, right?"

Several choked sobs sounded as they all nodded in agreement.

"I need mew to be strong, stronger than mew have effur been before...I need mew to carry on and take care of business until I get back..." I said softly. "Mew need to really look aftur the P.A. and dad, they aren't doing well at all..." I hated to see my furmilly like this and I fought the tears that were stabbing at the back of my eyes. "Tell all my furriends thank mew fur the beautiful send off, I miss them all so much too and let them know that all is well at the bridge..."

Amber wailed and I whispered. "Amber, do what mew do best and share your love of books, mew must..."  I turned to Smooch. "Dude mew need to go pick Miss Dai$y up and go on that adventure, Parsley there's so many kitties with peeves right now mew need to help them. Fudge dude, mew get back in the studio and get your paints out, and Pandora share your love of fashion... and keep the wheels turning because dudes I've seen the future and we've got a lot to do, but that's classified right now."

I hugged them all and said. "I have to go back now, Humphrey said I wouldn't have long as I shouldn't even be here, but be strong and know I'll be back as soon as I can..."

My corporeal body began to fade, I saluted my team and smiled saying, "Dudes, mew've got your new orders, now do me proud!"

Not A New Beginning, Though A New Chapter Will Evolve

And so our grief, though not lessened is slightly more manageable in the knowledge that Basil will be back in the future in his full angel glory aftur a long deserved rest to keep us, The B Team doing what we do best.

Although Pandora has decided to postpone her pawty until Amber's 16th on the 24th of October, when hopefully we'll feel like having a little celebration and joint shindig.

In the coming days, as dark as they are right now we'll try our best to keep calm and carry on as per our new orders, and endeavour to return to a bit of normality.

Thank mew all so much fur the love, kindness, compassion and epically epic tributes offur the last week on all our interweb channels; your wurds of comfort were, are and will continue to be like little shining beacons of hope in the endless inky expanse that we're stuck in.

We salute mew, our beautiful furriends and know that we love mew all dearly and are so grateful to have mew in our lives.

graphics created with paid licence www.canva.com
Posted by Basil and The B Team ~ BionicBasil ® at 13:00

Email ThisBlogThis!Share to TwitterShare to FacebookShare to Pinterest
Labels: A Kick Up The Backside, CLASSIFIED INTEL FROM THE RB, New Orders have Been Issued