Our New Programming Schedule Update, Lean Times Are Upon Us & Yesterday's No Show on The Easter Pet Parade 296 with Dash Kitten, Barking from the Bayou and US! 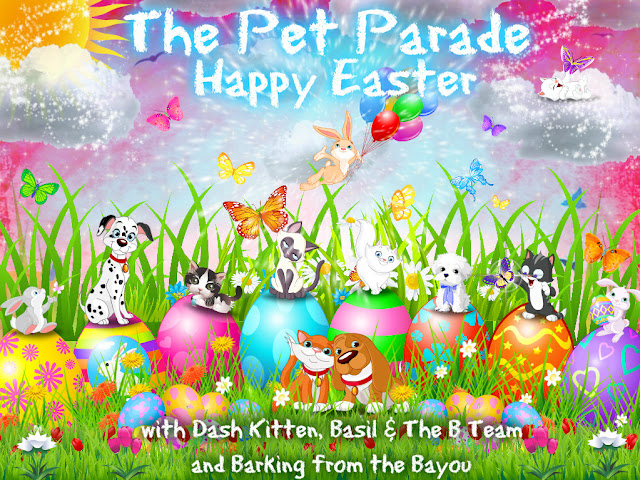 Welcome to our weekly news round-up!  This week mew may have noticed that our programming schedule is a little off, this is because we are not happy campers right now, the website we mentioned last week still has our posts up, although they ping the posts on and off like a yo-yo???  We've finally heard back from their hosting site who require us to prove who we are before they'll do anything, so now we're preparing statements to qualify and quantify who we are and what we own, and what those those vile, scum have taken.

So mew can imagine we're rather hissed off at that to start with, but then it gets better... it would seem that someone/s has reported our completely benign, inoffensive, family friendly cat blog as containing and we quote:

18+ with Sexual or Explicit Imagery
Warning: This site contains some obscene material or profanity
We've since had this stigma removed from one website, and are still waiting on one more to answer.

This, as mew can imagine really hissed us off even more, so at the end of April our current programming schedule will end a month early.  We were planning on releasing a brand new Colouring with Cats book at the end of this run as we have done fur the past few years, but right now that is on a full-stop.

Our new programming schedule will be very light and there will be no big posts until we're satisfied that we're not being plagiarized, stolen from, ripped off or wrongfully accused of inappropriate content.

So what's off the menu fur the Summer Programming Schedule? Purretty much effurything!

Here's what we won't be doing: 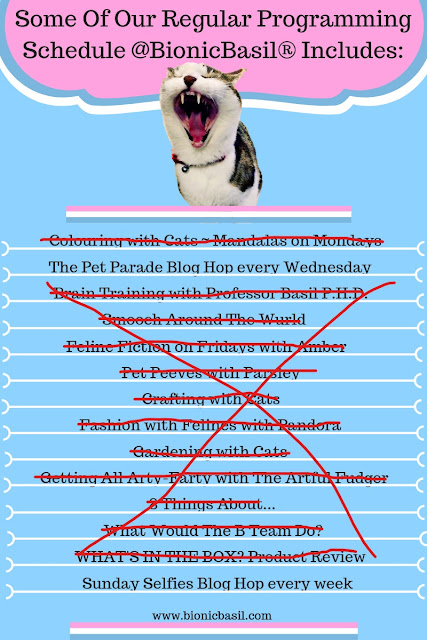 As mew can see that leaves us 2 posts a week, plus there will be NO Summer Blockbuster this year, so that means no epically epic adventure will be happening here either, many apologies fur that too, and we'd got an epically epic tale to tell as well, but that will have to wait now.

We have a simple 3rd post planned which will be revealed on the day of posting:- 3rd May 2019.

There will be no big birthday pawty posts as we've seen a lot of our graphics have been stolen and are on various websites fur downloading.

So really we're not left with much and mew guys can thank the content thieves fur where we are today, because we're not wurking our tails off fur them to take credit fur our hardwurk, and pass our posts/material off as their own - not that the thieves will care, because those kind of peeps don't have a conscience, they have no morals or ethics, and won't care in the slightest, they'll just move on to the next victim.

We have spent too long wurking on BionicBasil®, in fact since January 2000, so nearly 20 years now and we're getting a little jaded with it all.  The book that started effurything, 'Basil The Bionic Cat' furst published in 2004 has been pirated 100,000's of 1000's of times offur the years, [we saw it get downloaded 50,000 times in a week on one website] and now our lovely little blog is going the same way because of internet piracy.

Smooch sends many apologies to the kitties who are expecting to go Smooching Around The Wurld with him soon, those trips will happen, but not right now as previously planned.

We hope that we can get back to our normal vibe as soon as possible and hope most sincerely that mew'll stick with us through this upcoming lean time.

In other news, we said on Mondays post that we'd be here yesterday with a sponsored post - that didn't happen because the product we were supposed to be talking about wasn't the product we were sent when we opened the box and we honestly couldn't write about something we didn't feel right about, hence yesterday's no show!

Feline Fiction on Friday with Amber #96

Amber will be here on Friday, so we hope mew can join us then, in the meantime we wish mew all an epic day and don't furget to hop along on today's Pet Parade. If mew need to right click and paste your link to join in, please scroll down and click on the: Barking from the Bayou link below.

The Dash Kitten Crew
& Co Host
Barking From The Bayou