Welcome to The BBHQ Mid-Week News Round-Up ~ Make Your Own Felt Christmas Bauble from Cats Protection, The Phantom Widdler Strikes Again AND Another Health Update on Sloppy Sauce

Epic Wednesday Greetings Furiends
Welcome to the Pet Parade and our weekly news round up!

Furst up in the news this week, we are really excited to be sharing this supurr cute, limited edition Christmas Bauble Kit from the Cats Protection.

Decorate the tree with your own festive felted cat bauble this year.

Now, this isn't just any old Christmas bauble, this is a make a felt cat bauble for your tree, how epic, epically epic. 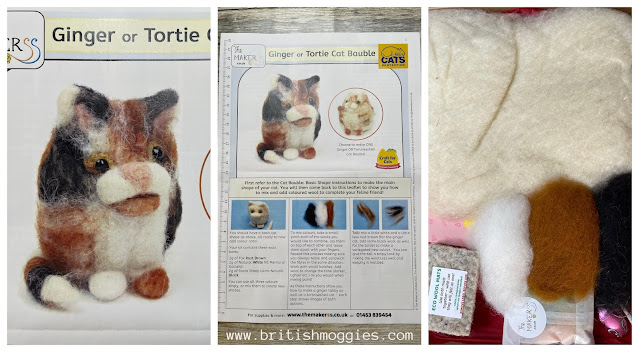 There are four cute kits to choose from.

And we know what mew're asking.

B Team How Do We Get Our Mittens On One?

Sign up and reserve your own kit here: www.cats.org.uk/craftforcats and join the live craftalong on Facebook on 27th November. Mew have until the 19th of October to reserve a kit subject to availability of course.

It costs £20 to take part including the kit, with £10 going to help the UK’s in-need cats and kittens, so not only do mew get something epically fun to make, mew're also helping kitties across the UK, we love that.

The kit comes complete with everything mew need to make whichever colour kitty mew choose, and is accompanied by a full-colour step-by-step instruction leaflet. In fact, it's similar to one of our Crafting with Cats posts.

The P.A. hasn't done felting before, and we bet mew can't believe that she hasn't tried it either! MOL

Anyhoo, we chose the Ginger or Torti option, as obviously, Amber said it needed to be all about her.

Therefore our plan is this, the P.A. is going to spend the next few days videoing her furst foray into the world of felting while trying to recreate a mini Amber, and we'll post the finished Amber Bauble on next weeks post.

The P.A. is eager to get started, so stayed tuned and watch for mini-updates on our Instagram reels as she makes it.

Don't furget to reserve yours today, and what a fabulous gift too.

Search the hashtag #craftforcats on insta to see other pics.

Many thanks to Cats protection for asking us to share this wonderpurr campaign.

Next up this week is another health update on Sloppy Sauce, mew may remember last weeks update, if not, click here for a quick recap.
Anyhoo, the P.A. fetched more of the Pro-Max paste from the vets and tried him again with that. It was an epic fail, he wouldn't eat it in any food at all.
The next step was collecting three poop samples, which happened Friday, Caturday and Sunday, which were then taken to the vets for analysis on Monday.

We are still waiting on the results, but for the last two days, Parsley hasn't done sloppy poop in the house. Now he does go outside, so maybe there's a couple of cowpats in the garden, but given his track record, he normally likes to poop in one of the litter boxes.

Paws crossed that he's on the mend, but we'll update mew when we get the poop sample results from the vets

Last up in the news this week. Smooch got a bit of a boggle on.

He wanted to know if all the clocks were broken in the house because it was 10.07pm and his Dreamies were late being served in his bedroom. 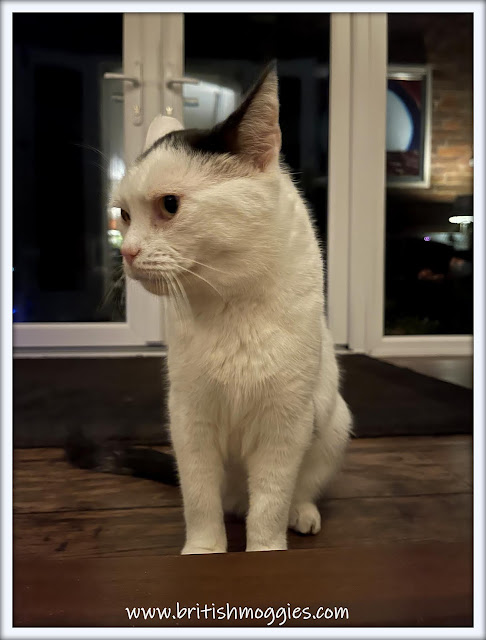 Smooch sleeps in the conservatory, that's his bedroom and every night when he goes to bed about 10pm, he has a paw-full of Dreamies on the rug and then the P.A. places a few extra on his pillow for a little snack in the night.

Yes, it's like staying in a top hotel where mew get chocolates on your pillow, but the other evening, the P.A. was running late and he was waiting to go to bed and there were NO treats.

Oh MY Cod! He was not impressed and funnily enough, he expressed his displeasure by widdling on the chair leg. Oh dear, the P.A. won't be late serving the treats again! MOL

The hot gossip from BBHQ this week is:
It's been epically dull and overcast the last few days, but Melvyn managed to find a sun puddle early the other morning, albeit a weak sun puddle, he was still getting some warms, and by the looks of it absolutely loving it! 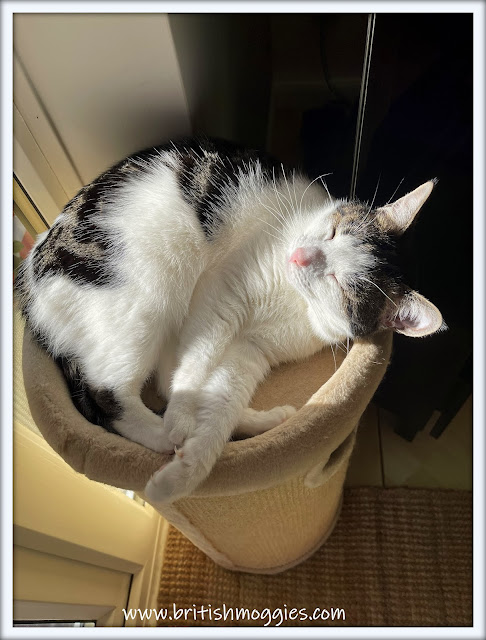 If mew've got sun puddles, do send some our way.

If mew missed any posts this week, here are the links:

Colouring with Cats & Crystal of the Week

That's us done for today, Amber will be back on Friday with another fab book just for mew, so do stop by the library as we know how much she loves your company, until then...