Love To Read? Book Reviews with Amber at The Mewton-Clawson Library #207 featuring **The Witching Flour** by Samantha Silver PLUS Friendly Fill-Ins Plus The Winner of Basil's Birthday Giveaway

Hello gorgeous library guests
and
Welcome to the Mewton-Clawson Library at BBHQ
Thank mew for joining at BBHQ today, and this was me yesterday morning when I was trying to avoid getting my eyes cleaned. 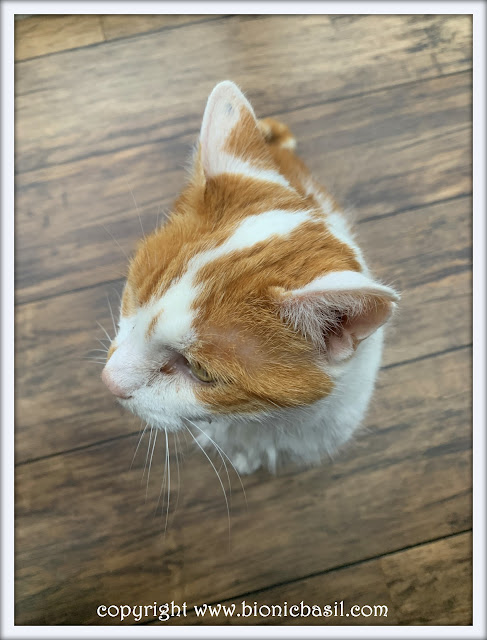 There I was, casually minding my own business in the catservatory, enjoying a few warms when the P.A. appeared with a tub of exceptionally evil eye wipes. She then proceeded to assault me with said eye wipes, trying to get some eye snot off my fur.
I mean, come on, who the fluff likes their eyes, ears and nose being roughed up with pleasantly smelling cleansing wipes? I certainly don't, and as for those new generation snowflake cats who actually like bathing in water, well that would never happen here, my tongue does a good enough job, thank mew furry much!
Anyhoo enough of my eye snot and bathing procedures, let's announce the winner of Basil's birthday giveaway.
Drumroll purrlease...

And the winner drawn out of the hat is:
Tinsel and Naughty Netty
WOOOOOOO HOOOOOOO!
MANY CONCATULATIONS!
If mew can email us your snail mail address at your earliest convenience, that would be epic.
deardrbasil @ gmail . com
Thank mew to everypawdy else who entered, and don't wurry if mew didn't win this time; there'll be another giveaway soon, in fact on the 21st of June, so stay tuned. 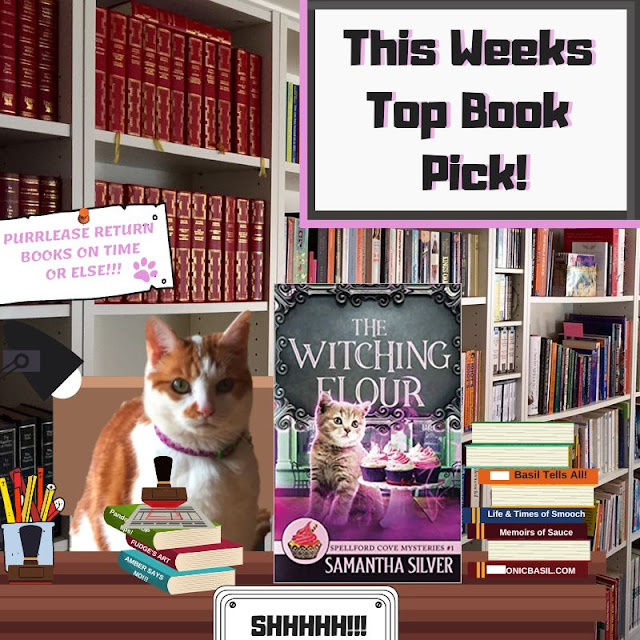 Mewton-Clawson Library Copy
The Witching Flour
Spellford Cove Mystery Book 1
by
Samantha Silver
Here's a little snippet of the book blurb:
Welcome to Spellford Cove, where the baking is sweet and the witches are wild. Robin Carter's life is less than stellar. All she has going for her are a minimum-wage job she hates, an uncanny ability to attract the biggest losers on her dating app, and a raccoon sitting in her kitchen sink eating her chips. So, when she finds out she's inherited a bakery in a small Washington town, Robin thinks this might just be the fresh start she desperately needs. Upon her arrival, however, Robin finds out she's inherited more than just a small business: she's also got her mother's magical powers. However, things start going south for Robin when a man dies at the local diner just after her arrival in town and she's fingered as the prime suspect.

What do a talking cat, a psychotic ghost and magical powers have in common? They are all part of this epic new book series I've found called the Spellford Cove Mysteries.
As I was going through my wish list on Audible, I found a book on it from quite some time ago and thought I'd give it a go for this week's review.
Anyhoo, there's a talking cat called Shake's, and he's very much into reading, as mew can imagine I really liked him. There's a ghost haunting the bakery who was murdered by her boyfriend and now spends her time wishing evil on her killer who got away with the murder. And there's the slight issue of our protagonist, Robin suddenly finding out she's a witch with magical powers who can also see ghosts, and if that's not enough, she's now a prime suspect in a murder.
This series is starting off extremely promising; the pace is good, the plot and characters are good, and there's some humour. The ghost in the bakery, I actually found her character funny as she wishes for karma and retribution on her killer.
This is a classic cozy mystery story, and I like that the cat can talk to Robin straight out of the starting gate. It will be interesting to see how the relationship develops in subsequent books, as Shake's is rather demanding to say the least and I fully respect that! MOL
If like me, mew love a cozy mystery, this one is great, and a must-read.
Top Tip
If mew have an audible account:
Always check for box sets before buying a single book in a series. For instance, today's book came in a box set of three, and that was the same price as a single book, so in essence, I got three books for the price of one.
Audio: 5 hours 10 mins
Paperback: 268