Welcome to The BBHQ Midweek News Round-Up ~ Smooch Skives Off Again, Fudge Is On A New Roof And Melvyn is Stumped: He Has A New Bandana Selection, Which One Should He Wear Furst? **PLUS** BBHQ Q&A

Epic Greetings Furiends
Welcome to the BBHQ midweek news round-up!
Furstly apologies for posting halfway through Wednesday, the P.A. went to the dentist yesterday and upon her return didn't feel like blogging, she asked Smooch to take the reigns, but sadly he was skiving off again under his desk, see below! MOL

Also, we've had a few showers this week, not heavy just gentle rain and in some instances just spots. It's been rather humid too, which isn't pleasant, but here's hoping that the humidness fluffs off soon.

Furst up in the news this week 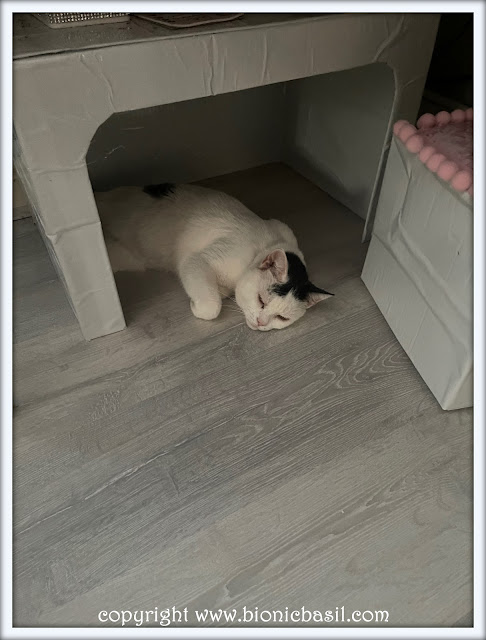 This is the reason we're late posting this week's news, Smooch was utterly non-compliant in the P.A.'s wish that he should finish today's blog post yesterday.

His excuse was that his laptop wasn't running propurrly, but the truth of the matter was he just wasn't feeling the vibe yesterday! MOL

And check out Smooch's latest TikTok video here, he's very sneaky and cute in the way he uses a mirror!

If mew like Smooch's desk, check out how we made it on our Crafting with Cat's post here.

Fudge Is On A New Roof 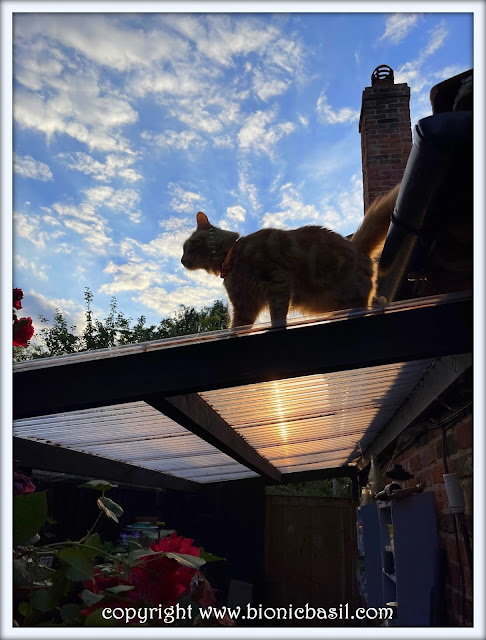 Mew all know by now how much Fudge loves getting on the roof, well he decided to get on the potting shed roof this week to check out nextdoors front garden from a new purrsepctive! MOL

Sorry there's no Follow the Floof this week on TikTok, but we did post a new video of him getting neck scritches in the garden, click here to see!

A New Bandana Selection, Which One Should Melvyn Wear Furst?

We purrchased a couple of new bandanas from our epic pal at Eric's Empawrium a few weeks ago, and he also sent us three extra, which was a delightful surprise.
Anyhoo, Melvyn can't decide which one to wear furst, what do mew think he should choose?
1. Parrot
2. Space
3. Funky Cats
4. Good Vibes
5. Stars
Let us know in the comments, and Melvyn will model it for mew next week
>^.^<
Also if mew're in the market for a new bandana, visit Eric's Empawrium and use our Ambassador discount code to get 15% off any purrchase: Bionic15
>^.^<

If mew have any questions for us, about anything, ask away, and we'll answer on next week's post.
Plus we'll also answer any questions left in the comments over the last few days in this section too.
The J-Catsasked on Sunday's post.

And Mummy thinks the idea of blackberry and apple pie with custard or ice cream is simply heavenly! We are wondering, did you get a lick?

Smooch did sneak a lick of the ice cream, so naughty!!! MOL

Meezer's Mews & Terrieristical Woofsasked on last week's news.
Did Fudge catch the pigeon?? Or anything?
No, Fudge didn't get a pigeon that day, but there was a dead dove in the courtyard on Sunday afternoon, though we think it flew into the conservatory window and broke its neck. So sad!
Memories of Eric and Flynn said on last week's news.
Fudge, when you have sorted that pigeon out I have one here that needs sorting. He sits on the phone pole outside our bedroom window at 5.15 every morning and coos constantly. Not only that, but it is the most raucous coo you have ever heard!!
Oh no, there's nothing worse than an obnoxious noisy pigeon, especially at 5.15am, Fudge has several ideas for dispatching said cooing nightmare, although none of them are family-furiendly so we can't share them here, but he's sure mew know the ones we mean! MOL
Eastside Cats said on last week's news.
Thank you for the voodoo doll answer, although I assure you, I have no need to make voodoo dolls...*wink*
Don't wurry we won't say a wurd, but if mew want an order just let us know on the side **WINK WINK** MOL

That's us done for today, we will be back on Friday with some more fab fluffers just for mew, and if mew missed Monday's post click here to catch up on a re-run of one of our Cat Hazards posts and get a free printable of 12 Cut Flowers Toxic to Cats.