Welcome to another edition of

Today we have one of our sponsored posts to share with mew.  The truly fabulous peeps from the company:

contacted us about 3 weeks ago to see if we would like a box of cat goodies, how could we possibly say no to that?

They furry promptly dispatched us this... 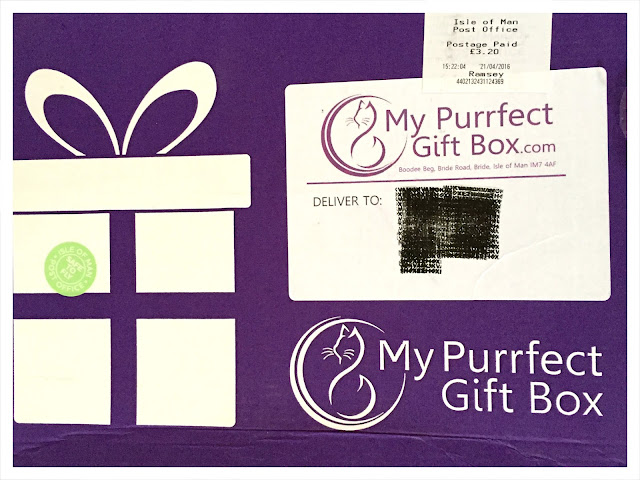 And a couple of days later, a delightful purple box arrived on the doorstep.

Well mew can imagine our extreme exhilaration at seeing said box and wundering what treasures it held.  Sadly the P.A. had the flu and the box was put away - mew can imagine our utter horror and outrage at such a heinous act - but she said, "As soon as I'm better we'll open it, ok?"

Well obviously we had to concede defeat temporarily as the box went into a cupboard fur the next few days.

Anyhoo, on Bank Holiday Monday the P.A. said, "It's time to open the box!"  Yet as it was a nice day I was having a little fun down the field, Smoochie was in the garden with Snowie, and Humphrey was being pampered at Uncle John's next door, so that just left Parsley and Amber in the house with the full box of goodies. 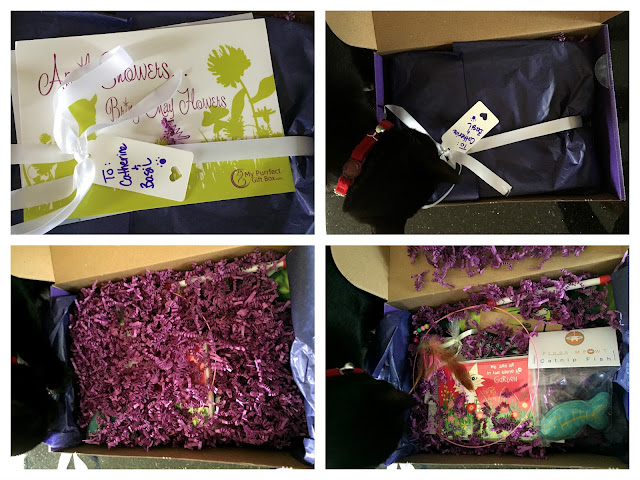 Parsley was most eager to investigate the box and got stuck right in.

"Amber mew really need to see all these pawesome goodies!" he said excitedly.

Parsley chuckled as the layers were peeled back and the contents revealed.

"Effurypurrdy else will be so annoyed they missed this," he said. "But that means all the more fur mew and me!"

"So what's in the box?" Amber demanded from floor level as Parsley purrused the array of gifts. 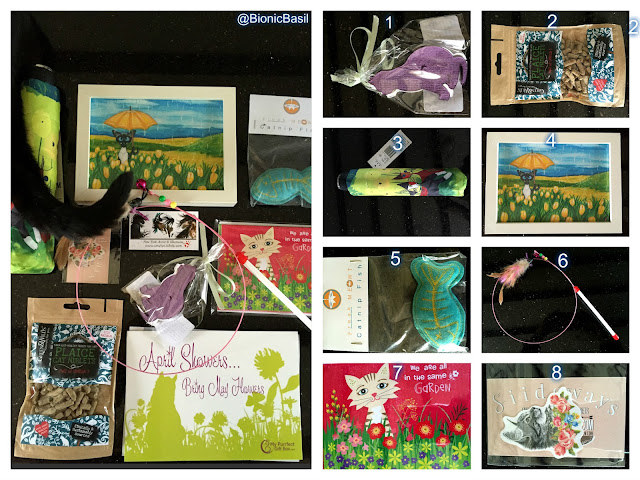 "Well," Parsley began as the P.A. carefully removed the items placing them on the breakfast bar. "I can see something with a feather on and I can smell catnip....mmmmmmmm.... deeeeeeeeelicious!"

His attention was somewhat diverted and rather impaired by the fragrant notes of catnip taking offur his senses, so we'll take this brief interlude to list the contents.

2. A bag of Green & Wilds treats [one of our favourite brands]

7. A pack of kitty note cards

"Open it, open it, open it!" Parsley said impatiently as the P.A. began to remove the wrapping, far too slowly fur his liking from the turquoise toy. 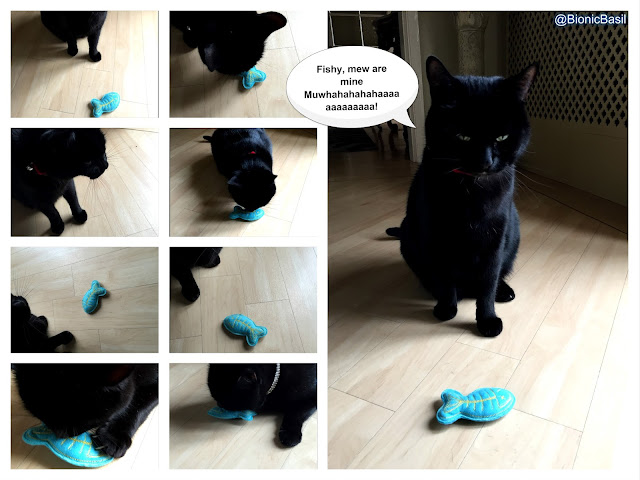 Amber then took offur to finish it off! MOL

[Addendum: It was still in one piece aftur the grueling session and has subsequently been murdered, sorry played with on a daily basis] 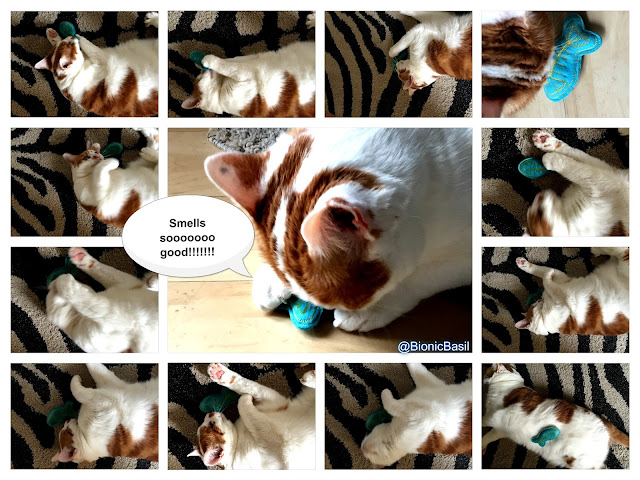 She promptly jumped right in on the action with the feather fishing wand, much to Parsley's chagrin who then proceeded to sulk terribly because he wasn't furst in line!

"Hooman, I will resist, mew will not break my resolve!" Parsley declared boldly as the wand fluttered back and forth several times, and he did an admiral job of showing total indifference and aloofness. [Kudo's fur lasting out that long! MOL]

Seconds later he muttered, "Damn mew hooman with your wily and devious ways.... I can't resist any longer!"

We were furry excited about the cat shaped seed infused papers and insisted that the P.A. plant them immediately.  Luckily she had a bag of compost under the garden-port and some spare plant pots, so within 5 minutes four pots were planted, watered then placed in a sunny windowsill [as directed] and we can't wait to see what grows. 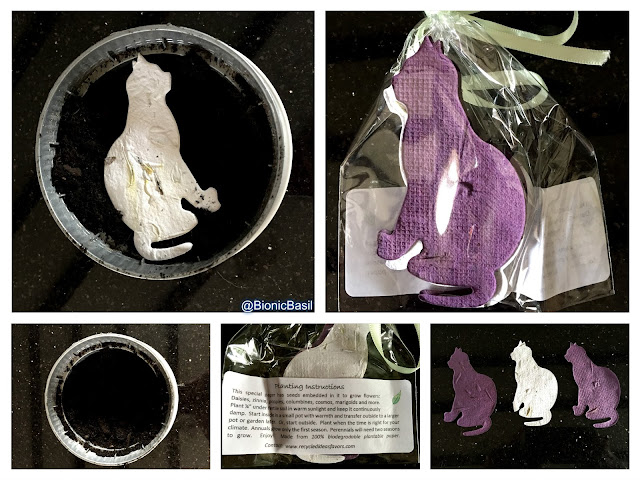 Update on the seeds: after 10 days of careful nurturing, 3 out of the four seed papers are growing - WOO HOO - we'll update mew further and let mew know what fab flowers they turn into!

[Sorry we don't have a photo, we'll make sure when the seedlings are larger we get some good pics to share and more as they grow]

The P.A. was delighted with the new umbrella and it has become a purrmanent fixture in her handbag and she has already had few a lovely compliments when out in the rain. 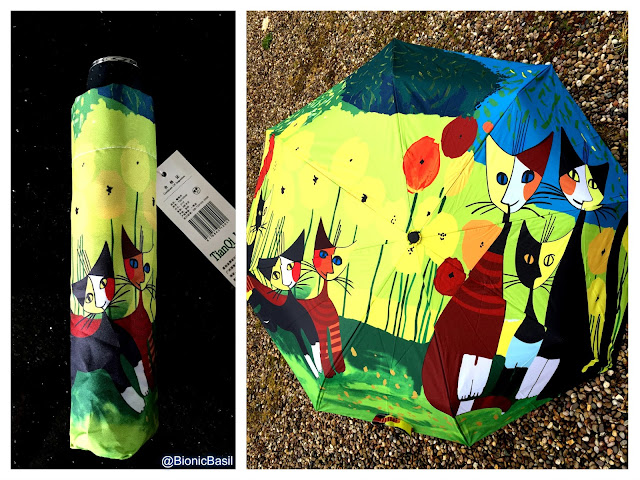 The framed kitty picture has been placed in the lounge, but as far we know the temporary tattoo has not been applied yet, well not that we've seen! MOL And the kitty cards will come in furry handy too.

The Green & Wilds treats are truly excellent as mew know from a past post featuring these tasty treats, and effurypurrdy got to sample the deliciousness.

All in all we can safely say that the My Purrfect Gift Box experience was rated 10 out of 10 by all purrticipants.

If mew would like to find out more, here's their social media links:


We would like to say a special thanks to the pawesome peeps at My Purrfect Gift Box fur giving us this oppurtunity to receive a parcel of goodies ~ THANK MEW FURRY MUCH!

FYI: Even though we were given this item/s free of charge for a review, our review is completely honest and reflects our own experience with the product/s