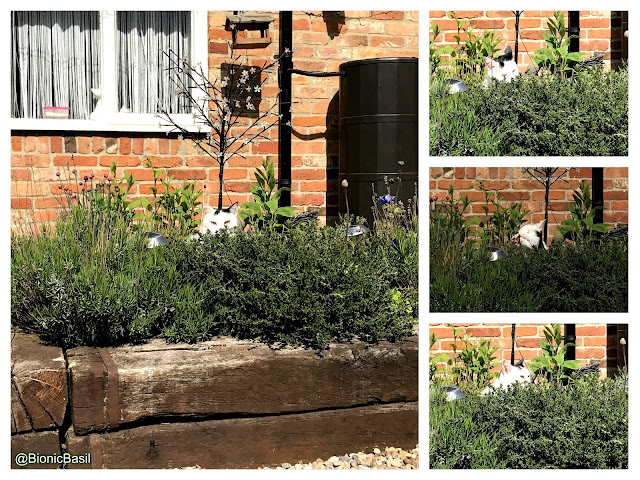 Smoochie was being rather cheeky on Monday, he didn't think the P.A. could see him hiding behind the plants in the raised beds and when he thought the coast was completely clear he set about nomming one of the plants - so naughty! MOL

He also likes to lay on the lawn and pull the grass out with his teeth, though paws crossed he hasn't done this since the new lawn has been down, because I don't think the P.A. would like her new bowling green of a lawn being decimated by Smoochie. 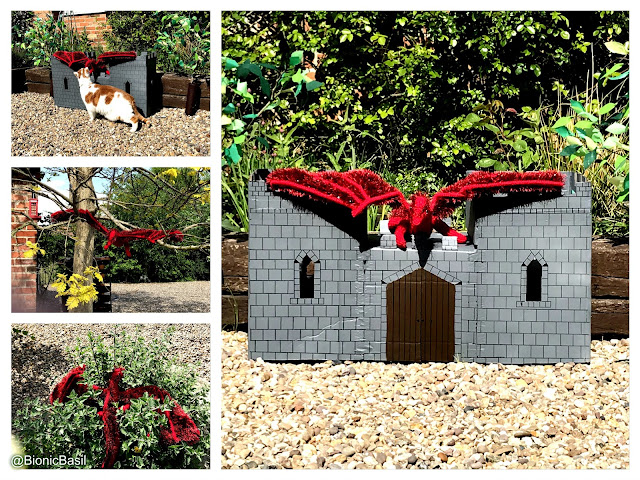 Also Flambe the Dragon escaped, he's our resident dragon from the Kit Knit Cos Play! So that was fun chasing him around the garden as he swooped through the trees, I did have stern wurds with him though as he decided to take the catmint plant hostage, but unfortunately he completely disregarded what I said, so Fudge went to suit up in his amour to take care of the situation.  Mew can see more later in the week when the story goes live.

And now I think it's time fur this weeks book, so let get to it...

Dead with the Wind

An gel and Dickce Ducote tend to stay put in Athena, Mississippi, but a wedding is a good reason to say a temporary farewell to Charlie Harris's cat Diesel and go visit relatives. But while their stay in Louisiana is scorching hot, the atmosphere at the wedding is downright cold, with bride-to-be Sondra Delevan putting her trust fund above little things like love and loyalty.
*    *    *

A few months I reviewed Book I in The Southern Ladies Mystery, Bless Her Dead Little Heart and Book II is certainly as good as Book I.

The elderly Ducote sisters are visiting a cousin fur a wedding when things take a spiralling plunge downwards.  The bride is found dead, and at furst it appears to be a seemingly tragic yet rather bizarre accident and that's when things get messy.  A heart attack victim and a poisoning come next, two more casualties to add to the increasing body count.

So many suspects, so many secrets and so many reasons fur murder.

Well, mew know I don't do spoilers, so mew'll have to read or listen to it to find out! MOL

Dead with the Wind

Sadly it's time fur me to say BFN or bye-fur-now as mew know the drill, so many books, so little time and we'll be here again on Friday with the Pet Parade and don't furget to enter Smoochie's Birthday give-Away on Sunday's post, just leave us a comment fur a chance of winning of an epically epic surprise bag of goodies from the Kit Knit Cos Play Store!