Welcome to another Pet Parade.  This week the fab kitties at:

asked if we'd like to share their cat/hooman years graphic, so of course we said yes, then we saw that Amber and I are in the geriatric section!!! MOL  Ah well, mew can't stop time and at least we're still doing rather well fur old aged cats!

In other news this week, we've raised £150.00 from the Time Travelling Bobble Hat Tour and various donations to give to our fav rescue, Burton Joyce Cat Rescue, so this weekend we'll be sending the monies to them.  Thank mew furry much to all who joined in the fun and to all those who sent donations, we luffs mew loads and wurds cannot fully express our gratitude.   FYI we're taking a break from the TTBH Tour fur the summer and will resume later in the year fur another round of fun. 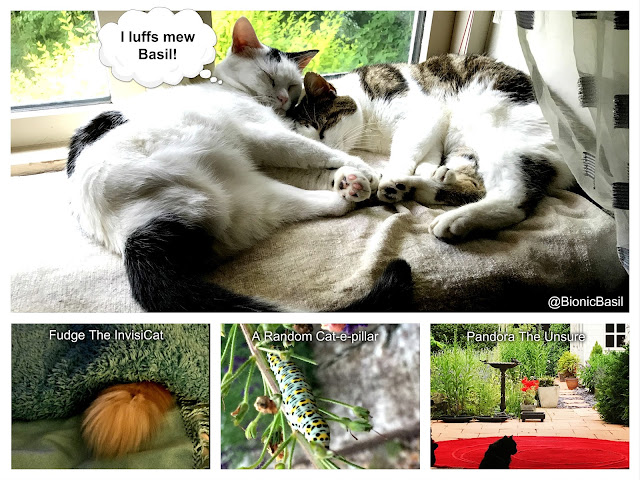 What have we been doing this week, we hear mew ask?

Well, Smoochie got rather clingy and needed lot's of hugs.  Fudge thinks he's completely invisible and totally undetectable when he's hiding out under the blanky, except that his tail is so huge that it sticks out and he has no clue at all! MOL  Pandora spent an hour sitting by the patio doors the other evening undecided whether she should stay or whether she should go outside!  And finally when the P.A. was watering the garden the other evening she spied this rather colourful cat-e-pillar, so that's what's been munching on our plants! MOL  Don't wurry, the P.A. left it to do its thing, as it'll either turn in a beautiful flutterfly, or not so purretty moth, or wurse still get eaten by burds...  that's nature though.

Do mew know what kind of cat-e-pillar it is?  As we have no clue at all!

Mandalas on Mondays ~ Colouring With Cats #33


We'll be back our usual Selfie Selection on Sunday, so hope mew can join us then.

Other graphics used under paid licence www.canva.com  and www.pizap.com
Posted by Basil and The B Team ~ BionicBasil ® at 01:00
Email ThisBlogThis!Share to TwitterShare to FacebookShare to Pinterest
Labels: Barking from the Bayou, Bionic Basil, Blog Hop, Blog Paws, cats, love is being owned by a husky, Rascal & Rocco, The Pet Parade