TRUE STORIES FROM BBHQ **Has Your Cat Ever Saved You?** ~ Catkin the Hero Saved The P.A. From A Midnight Home Invasion 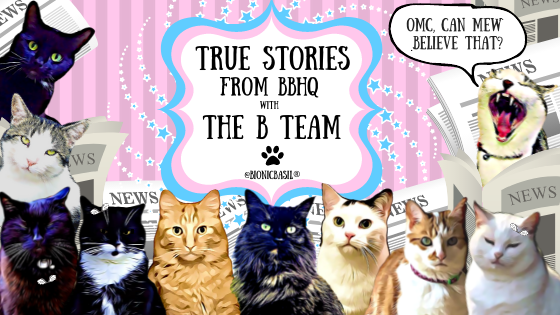 Happy Monday fluffies
Today we're sharing one of our true stories from BBHQ, and this one takes place in January 2000, it is something the P.A. won't ever forget.

Years ago, the P.A. had a beautiful tuxedo cat called C. J. Catkin. He'd been hanging around her apartment in the city centre and had even started to invite himself in more and more frequently. She made inquiries and found out the peeps who lived in the building next door had adopted him as a kitten, he was 5 months old and they didn't want him anymore, and literally left his cat food and litter box outside the P.A. doors after she expressed an interest in his welfare. No, thank you; no, here's his stuff, just dropped it off and ran.

Anyway, while the P.A was delighted at getting a kitty, she was completely horrified at the previous owner's lack of warmth and compassion for such a gorgeous little cat. But their vile actions led to a friendship that was extraordinary.

Catkin, as he was called was absolutely amazing, he had a purrsonality that just shined. He KNEW so many things, for instance on Saturdays the P.A. would buy him fresh prawns. He'd never see her bring the shopping in but he knew without a shadow of a doubt when his prawns were in the fridge, and he would stand on his back legs and try to open the door - which he couldn't - though it was his way of telling the P.A. he knew they were in there. And he never went to the fridge any other time apart from a Saturday which was Prawn Day.

When he was two years old he unfortunately got hit by a car, and the P.A. took him to the best vets to fix his badly broken back leg; it was a bit like the 6 million dollar cat and after many months he was finally healed, all the pins from his leg removed and he was almost like new.

But just before the P.A. moved to our current home aka BBHQ, Catkin was poisoned by some sicko cat-hating-flufftard, and after rushing him to the vets and getting him stable and well on the road to recovery the pair finally moved back to the countryside.

Catkin loved it, he adored the garden and the bigger house with lots more windows to look out of, and his favourite place to sleep was in the airing cupboard on the landing.
After he'd been poisoned, he had to have soluble aspirin administered orally every other day to keep his blood thin, plus the incident reduced the circulation to his previously injured leg and he started to drag his paw, it would curl under as he walked and the P.A. would gently massage his paw and leg three times a day to get the blood flow happening until finally, he could almost walk normally again.

So after moving into the barn, just the two of them, hardly any furniture and the bare necessities, it all seemed fab. Until a frosty night in January two months later. 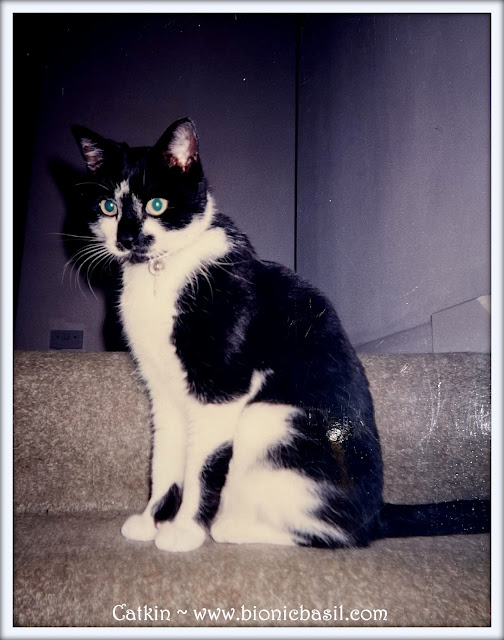 This picture was taken not long after they moved in.

Catkin the Hero Saved The P.A. From A Midnight Home Invasion

I remember feeding Catkin his usual late supper before I went to bed, it wasn't that late maybe 11 pm. I slipped into sleep and the next thing I remember was Catkin jumping up next to me at some point in the middle of the night, he began to paw my cheek and mew softly. Then as I was rather slow in rousing, he began with much earnest to wipe his cold, wet nose all over my face.
Realising that something was wrong I opened my eyes, and lay there for a moment wondering what was happening and quietly asking Catkin why he was so agitated. And that's when I heard a distinct metallic CHINK CHINK CHINK noise. I held my breath and focused on the one sound, as at first, I wasn't sure if I was hearing things. Unfortunately, it wasn't my imagination, it was someone trying to break into the house, in the sitting room beneath my bedroom.

At this point, my mind went into automatic pilot and I knew I couldn't get out of bed because the barn is really old and the floors creak terribly upstairs. So there was no way for me to check out what was happening without alerting the intruder or intruders that I was awake, and at this point, I had no idea if they were in the house or not.
I grabbed my cellphone, praying that there was a signal as back in the 1990's it was a rare occurrence, and by all that what merciful and I'm not being dramatic when I say that, I had two bars, first I dialled my Uncle's house right next door, but they didn't answer which was not the scenario I was hoping for. Then I dialled my parent's house as I knew my dad would answer as he's always been a light sleeper.

He answered almost immediately but as I was telling him of my plight the signal dropped out cutting the call, and I remember screaming inwardly at the fluffing rubbish cell service. My dad couldn't remember my cell number back in the day and called back on the landline telephone, which was actually in the sitting room beneath my bedroom. It rang and rang, I could hear it upstairs, and I was cringing inside as I thought if the people had got in the house, what would they do next?
The next thing that happened was the outdoor security lights pinged on, and I heard heavy footsteps running across the gravel drive.

At this point, Catkin was waiting by the bedroom door, and we crept as quietly as we could along the landing. I tried to walk with my feet on the outer edges of the floorboards so they didn't creak and the same down the stairs as I held my breath still not knowing if anyone was actually in the house with me and Catkin. Reaching the hall and solid floors I slipped into the laundry at the other end of the house and found a baseball bat, and feeling a lot better knowing I'd got a bit of protection I headed towards the lounge in the dark.

Luckily whoever had tried to break was gone and I found to my utter horror that they had been trying to prise open the metal patio doors with a screwdriver as the lock was all bent and the door frame damaged.

If Catkin hadn't woken me in the middle of the night, I dread to think what might have happened.
The next day I reported it to the police, and it turned out that there had been more usual activity in the village that night. Someone had tried to steal a horse and failed, plus there'd been a small horsebox lorry parked up near the pub in the early hours of the morning. So whoever it was; they had a plan and BBHQ was part of it, whether it was for a burglary or what I'll never know.
Catkin very sadly died on the 27th of January that same month; a blood clot from the poisoning reached his brain and even though I got him to the vets, he died a few hours later.
He only lived to be three and half years old, it wasn't long enough. I still think about him every day, even though it's been 22 years and one month since he departed.
Catkin did save me that night, from what I don't know, but he saved me by coming and waking me up to alert me of imminent danger, he knew what was happening at the patio doors was wrong, he understood the assignment. And I'll never forget what he did for me for as long as I live. He was so, so very special and I was beyond crushed after he died, I can't describe the devastation I felt at his loss, it was truly crippling.

In total, he saved me three times during his short life; you can read about the other two here when he saved me from something so weird and quite unexplainable, but I shall call it a paranormal attack.


Catkin was a hero, there's no doubt in my mind that he was with me for a purpose and when that purpose was done or completed it was his time to move on.

Basil is buried next to Catkin in the garden, and they were so very similar. I often wondered if Basil was Catkin reincarnated... maybe he was and that's why I felt exactly the same about Basil as I did with Catkin.

Many thanks for joining us today, and if mew have a true story mew'd like to share, do let us know as we'd be honoured to post it for mew.

We'll be back on Wednesday with our Midweek News Round-Up and celebrating Dr Seuss Day, so do join us then to see what's been happening in Mewton-Clawson since last week.

Graphics created with paid licence www.canva.com
Posted by Basil and The B Team ~ BionicBasil ® at 00:30
Email ThisBlogThis!Share to TwitterShare to FacebookShare to Pinterest
Labels: ©BionicBasil®, break in, cat blog, cat life, cat lovers, Has Your Cat Ever Saved You, hero cat, home invasion, TRUE STORIES FROM BBHQ