Welcome To Friday Fluffers ~ Showcasing The Latest Batch of Photo Bloopers From The BBHQ Archives Starring Smooch, Parsley and Pandora ~ PLUS Friendly Fill-Ins & The Winner of Basil's Birthday Giveaway

And furst on the podium is Smooch the Yawping Heathen. 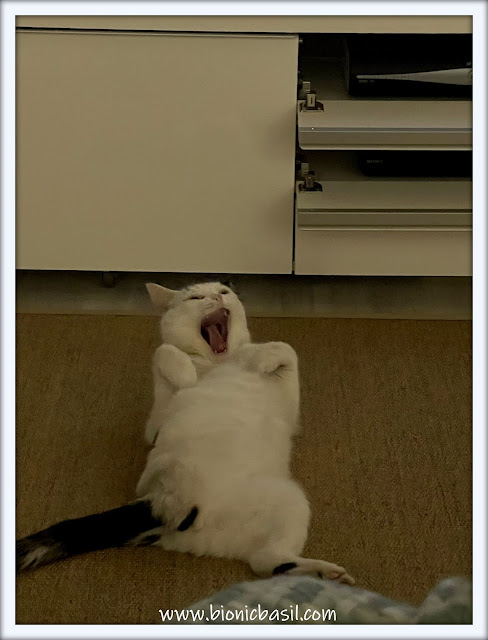 Melvyn had just leapfrogged over him while he'd been taking a leisurely bath, needless to say Smooch was not impurressed! MOL

Next up is Parsley and we did share this a few weeks ago on our Instagram feed, with the caption;
My Reaction To Peeps Who Don't Like Cats!!! 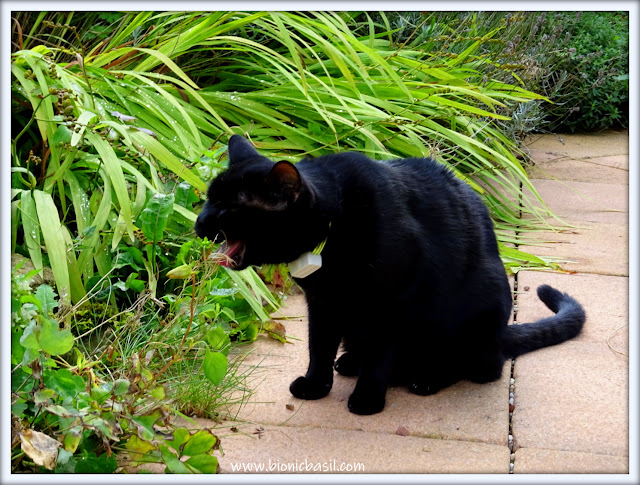 This does make us laugh; we can just imagine Parsley doing this, and he'd probably hawk up and deposit a large furball as well on anyone who doesn't like cats! MOL 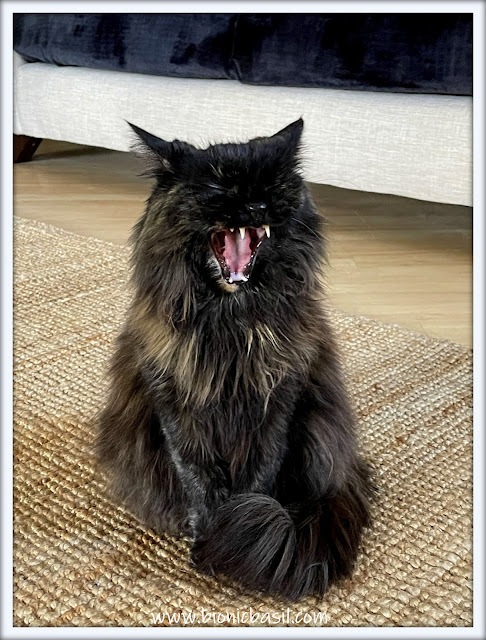 Pandora is rather a complicated kitty, rather aloof and loves her own company, so when Fudge announced he was going to be more reserved when it came to his eating habits, Pandora cackled loudly and replied, "That'll be that day, and I'll remind mew of that when mew're muscling in on my dinner later!"

Sadly, Fudge's table manners are something to be desired; he tries to sample everyone's food just in case it may be different from his own which it's not, and he uses his floof to expertly manoeuvre himself in front of everyone's else dish for a quick nibble! MOL
We're hoping that one day he'll just be catisfied with what's in front of him, though we're not holding our breath.
Also, purrlease can mew send Pandora some POTP as she was at the vets yesterday for some dental wurk and she had two fangies out, so she's now recovering back at BBHQ and is desperate to go outside but she can't.


1. I am long overdue to go on a bit of a jolly, I could really do with a vay-cay but don't see that happening at all.
2. I am so sick of a never-ending Jobs List or To-Do List; I seem to just tick one thing off and another three or four are added!
3. I don't have a strange snack I like to eat. Though I could snack on anything chocolate, ice cream, biscuits, crisps/chips, cake, pastries, sweets etc... but before you categorize me with a bad diet, I don't actually eat any of it, as snacks are off the menu completely and have been for quite a number of years. (Big sigh, and now I have written that, I'd really like to eat a jam, sugar-coated doughnut! Maybe one day!!! LOL)
4. I can't decide as I'm a bit of a random collector, just this week I've acquired an antique tin trunk out of an auction - unseen too, and I'm waiting to take delivery! LOL   Two interesting things I can mention are; a 100 + year old ornate brass shop till/register in good working order, and a cast-iron number/engine plate off an old locomotive whose origin started here in the UK, then it went to South America where it had many, many decades of service for the mining industry until it finally came back to the UK a few years ago and I got the plate off it - the train was like the Hogwarts one, only not all shiny - these are a couple of the most random things I own, but there's oodles more at BBHQ.

Okies, now let's announce the winner of Basil's 19th Birthday Celebration, so are mew ready for the announcement? OF COURSE MEW ARE! MOL
DRUM ROLL PURRLEASE...via GIPHY
We drew a name from the hat and...

Many concatulations guys, purrlease email us your snail mail address, mew can use the contact form in the left sidebar, and we'll get your goodie bag sent asap, and purrlease let us know what your favourite colour is?
And thank mew to everyone who entered the giveaway, and don't wurry if mew didn't win this time as Fudge's 6th birthday pawty is on the 21st of June, so mew'll have another chance to win one of our famouse goodie bags then.