The Pet Parade Blog Hop No: 169 ~ Hosted by Rascal & Rocco Co-Hosted by Basil & Love is Being Owned By A Husky & Barking from the Bayou 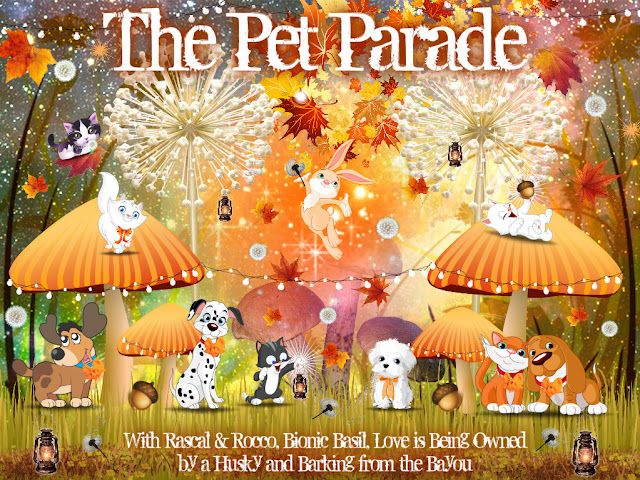 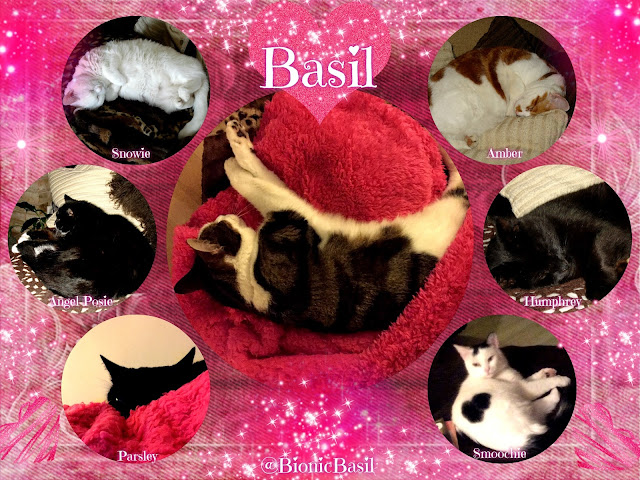 We do hope mew've all had a great week, ours has been good.  We've been sleeping loads [MOL] keeping warm by the fire and generally having a supurr lazy time due to the cold weather.

Mew can see we're all in the pawesome pink glow of  beautiful ZZZZ's, Parsley did make me MOL though because he loves to get completely immersed in the blanky.  Smoochie was feeling a little fuzzy, hence his soft focus picture, Snowie was in a complete kitty coma as was Humphrey and Amber, well Amber looks like she couldn't take the pressure anymore and just zonked out.  And as fur me, once the pink uber snuggly soft blanky calls my name that's it, I'm done fur the next few hours! MOL

I'm on the cover with Moet the Blind Cat, it's so exciting and the calendar design is amazing, it comes in a free-standing wooden frame, so mew can sit it on a shelf or table, or mew can wall mount it.  And the really great thing is the frame is re-usable, how fab is that?

Feel free to share and spread the wurd fur Sir Snowy's kitty charity, he will be effur so grateful.

Here's the direct link to purrchase the calendar:

Now I know we haven't got a calendar to show mew of our own, that's because they're on order and won't be with us fur a few days.  We have ordered extra so one of mew lucky kitties will have a chance to win it when it arrives, how exciting is that?! MOL MOL

We're so chuffed to have been part of this wunderpurr project again along with so many furriends from Twitter, and we'll keep mew posted about the giveaway.

In other news, FACEBOOK SUCKS!  We are going to have a little hissy fit now - Facebook is not sharing our posts, is now robbing us of likes and is basically a real crappy platform!  Since Monday of this week we've been burglarized of 222 likes, like seriously what the flip?  And then to add insult to injury our posts are being seen by less than 0.5% of our followers... seriously there's something wrong, but we doubt we'll effur understand the FACEBOOK crappy protocol management delivery system - so we'll say it again FACEBOOK SUCKS!!!!!

Sunday Selfies with all of us ~ Looking Fur Summer!

Mandalas on Monday ~ Colouring with Cats #5

Wordy on Wednesday with Amber #18

In the meantime we wish mew all a truly pawesome weekend