Sammy Come Fly with US!

OUR EPICALLY EPIC ADVENTURE WITH SAMMY!

As mew will know our pawesome pal Sammy went OTRB on Friday 2nd December, and we were all gutted by this terribly sad news.

So, and I know we're a little late with this post, but we'll explain more in a moment, we thought we'd share Sammy's far too brief visit with us in Sweepy Ville... if that's ok with mew guys? 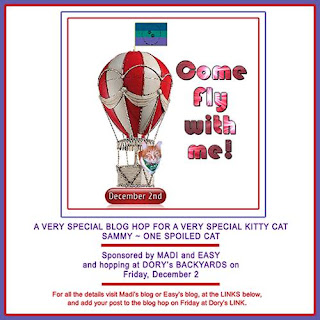 The Come Fly with Me blog hop is being held at Dory'sBackyard:

"Sammy, dude!" I said softly, my voice rather croaky due to only just getting out of the hospital. "Really great mew could stop by buddy, even though the circumstances are too sad fur wurds!"

"Basil!" Sammy shouted as he landed his beautiful red and white balloon in the courtyard. "Aftur all this time I finally made it!"

Humphrey, Parsley and Smooch grabbed the balloons mooring ropes and tethered the balloon securely and Sammy hopped out.

I hugged him and we bumped paws. "Been a long time coming, but finally we meet in purrson!" I said.

Sammy nodded wistfully. "Indeed Basil my fellow scout." We saluted each other and I wiped away a tear that began to trickle down my face.

Clearing my throat I said. "Come meet the rest of the Hoard."

We walked across the lawn to the secret entrance to the bunker and headed inside while I explained the schematics and pointed out various things on the way to the control room.

Once inside I began the introductions. 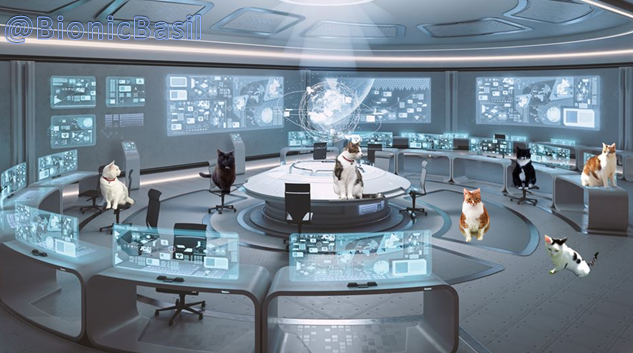 "It's an honour," Parsley said.

"I second that!" Snowie said.

"Hey Sammy," Angel Posie smiled, "Me and mew are going to have great fun on the other side!"

Sammy stared wide-eyed at the control room, "Wow Basil this is amazing!"

I gave him a toothy grin and replied, "Sammy dude mew ain't seen nothing yet!"

"So this is where mew have all your adventures?" Sammy asked as we headed back towards the garden.

"Yes, this is where it all happens!" I replied laughing. "We've had many an adventure here and now we're going to share some it of with mew...  We've got a lot planned Sammy, are mew ready fur the fun to begin?"

He nodded and grinned widely at me.

We stood in front of the summer house and the lawn began to tremble, a moment later the huge metal doors opened up and a tank appeared, Humphrey drove it off the platform and yelled, "Come on Sammy, let's go fur a spin!" 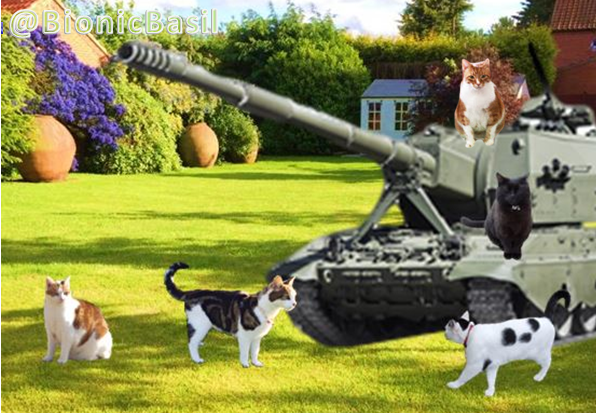 We drove the tank down the field with Sammy at the controls to meet a furry special furriend of mine.

We hopped off the tank and I said. "Sammy, meet Bunzilla, he's come all the way from the Purrmuda Triangle to wish mew well on your new and epic journey."

Sammy stared at the giant rabbit and said. "Jeez dude you're one big bunny!" 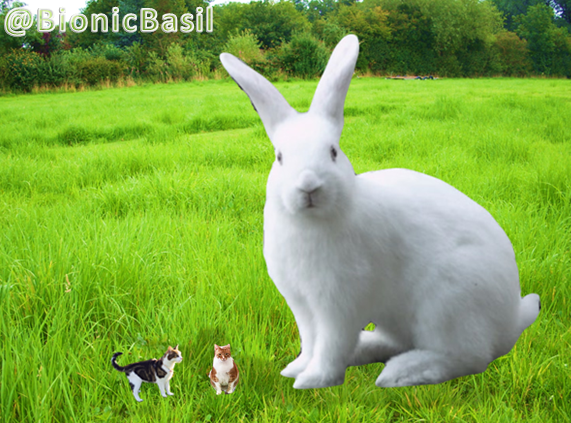 We had a bit of a picnic lunch with Bunzilla and then Parsley fetched the hummer.

"Come Sammy, let's tear up some tarmac in this bad boy!" I laughed as I jumped in the drivers side.

"We're coming too!" Smooch and Parsley said helping Sammy in.

"Buckle up effurypurddy!" I said as we drove out of the field. 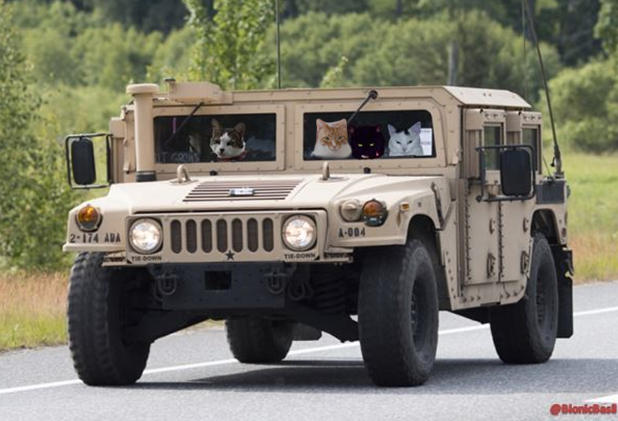 "We're flat out now Smooch!" I answered as we sped along the quiet country roads surrounding Sweepy Ville pointing to local landmarks.

"Look there's the windmill and just there is the observatory which is run by Dr Hoffenstein and offur there is the river, but we'll come back to that later, let's go blow some stuff up furst!" 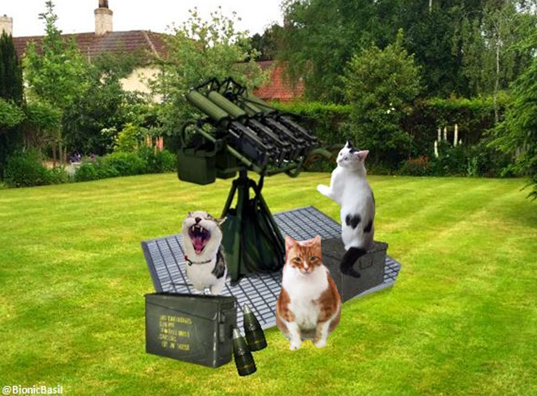 Back in the garden, Amber had got out one of the artillery guns and I turned to Sammy and said. "Dude this is some serious fun, what do mew want to blow up furst?"

Sammy grinned and whispered in my ear.  I roared with laughter and yelled to Smooch. "FIRE!"

Four shells deployed and exploded as they hit a derelict shed at the bottom of the field. 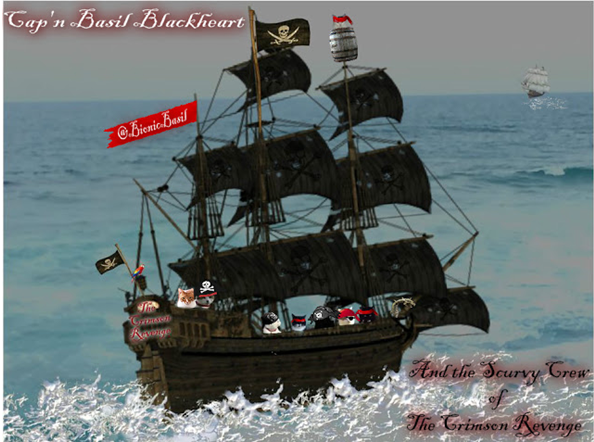 We drove back to the river and moored up was our pirate ship, The Crimson Revenge.

"Come on Sammy, we'll just go out fur a quick sail out of estuary and back again.

My seasoned crew hoisted the sails aftur releasing the mooring ropes and we sailed along the coast-line and headed into open waters briefly before returning to the dock.  The cool salty air was most refreshing but also most poignant of what was to come.

We drove back to Sweepy Ville and parked up next to Sammy's balloon.

Standing in the courtyard we all hugged Sammy and said our goodbyes.

Once safely inside the basket Sammy said. "Basil this has been the best fun effur, thanks so much buddy and to the rest of the Hoard too, I wished I'd come to visit sooner but mew know it's time fur me to go, so I'll say a fond farewell to mew all and see mew in the next life."

Smooch, Parsley and Humphrey released the mooring ropes, Sammy waved as the balloon rose up while we watched.  We waved like a bunch of crazy cats as tears streamed down our cheeks and Sammy soared up into the sky, hidden too soon from view among the white fluffy clouds.

We did try to leave a message on Sammy's post on Friday, but when we checked it wasn't there, so we'll say it again here.

Sammy mew will be missed terribly, we are so furry sorry mew had to leave, but do understand even though it still breaks our hearts.

Your Grande Finale was most Epically Epic and we hope mew enjoyed your short time with us today.

Me and The Hoard salutes mew and we'll be flying the flag at half mast in your honour....  see mew in the next life buddy, the one where we all live fureffur!

We're sorry we are a little late posting this, but as a few of mew will know I've been rather poorly this week with pancreatitis and have spent most of the week at the vets, having rather too many meds, blood tests, being prodded, poked, xrayed and examined.

The P.A. has also been rather poorly with the flu and with me being poorly too, this actually made her wurse due to the stress.  She said and I quote. "Worst timing ever!"

I was put on a drip on Tuesday after being admitted and given loads of meds that turned me into a space cadet, Wednesday evening I came home and Thursday morning I was back at the vets all day to have my meds, 6  doses of orally administered vileness throughout the day.  It was the same on Friday and Saturday I finished one of the drugs, so I was give a long-lasting injection of Baytril to last me until Monday afternoon when I return to the vets fur another check-up.   I also have to have some other stuff squirted on my food in the evenings, but that one is rather tasty, so it's not so bad.

I've also been put on some special diet food fur the foreseeable future until things get better.... I'm still furry lethargic and tired but I am eating and trying to gain back the weight I lost.   I'm feeling the cold too so the P.A. has furry kindly got me snuggled up with her wheatbag, so paws crossed I'm on the mend.... and there's no outside time on the horizon either...  ah well...

On that note we'll finish up 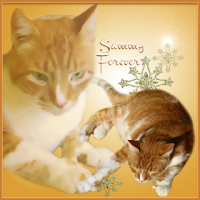 So here's to Sammy may mew frolick in endless fields of catnip, chasing flutterbys galore and snooze on the softest beds imaginable.

Gifs and Glitter Graphics
www.glitter-graphics.com
Other graphics used under paid licence www.canva.com and www.pizap.com
Hummer and Bunker pics used under licence from www.shutterstock.com
Posted by Basil and The B Team ~ BionicBasil ® at 14:00

Email ThisBlogThis!Share to TwitterShare to FacebookShare to Pinterest
Labels: come fly with me, one spoiled cat, Rainbow Bridge, RIP sammy, sammy, tribute to Sammy at One Spoiled Cat