The Pet Parade Blog Hop No: 174 ~ Rascal & Rocco Co-Hosted by Basil & Love is Being Owned By A Husky & Barking from the Bayou 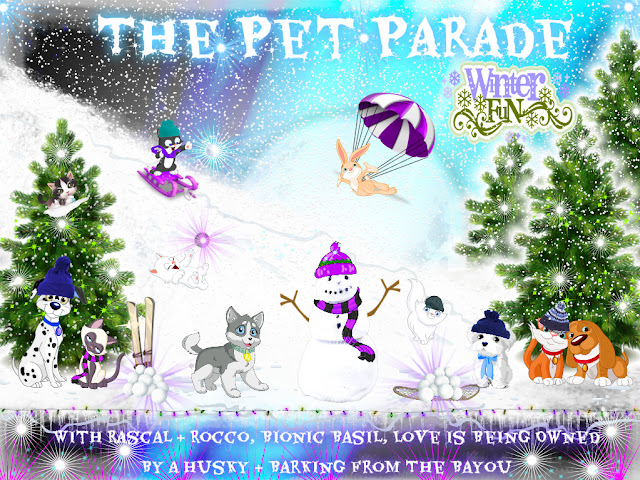 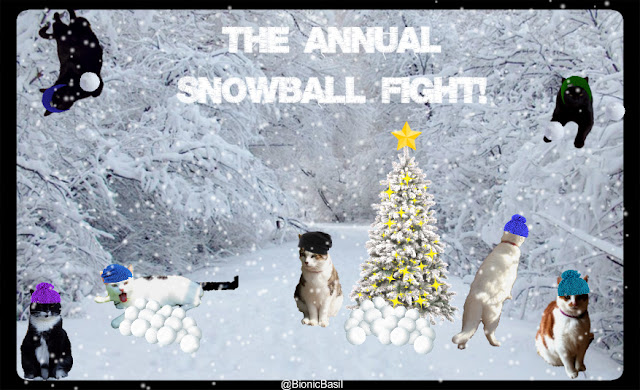 Welcome to another fabulous Pet Parade

And we're only a week away from Catmass, how exciting... SOOOOO EXCITING!

Did any of mew write to Santa Claws and ask fur anything inpurrticular?

I caught Parsley and Smooch the other day writing this.... 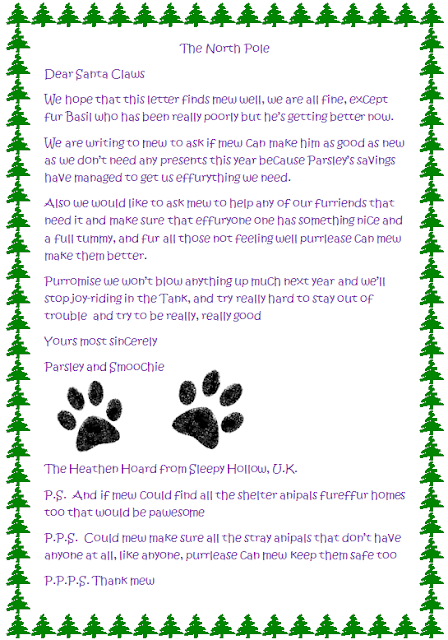 Obviously as I'm still convalescing I didn't take part in this years Annual Snowball Fight, but The Hoard insisted that I accompanied them into the bunker where they'd made their furry own winter wunderland on Level 9 with fake snow and effurything just to have my picture taken.

I then hurried up to Level 8 and got in the supurr warmz of the biosphere, as Horice keeps a balmy year round temperature of 25C or 77F.

It wasn't long before The Hoard joined me, cold, wet and covered in snow.  Horice being the gracious host that he is soon got the BBQ happening and coconut niptini's served all round, so I think mew could say it ended up as a pawty.  I must add that I had a plain grilled chicken breast and water while effurypurrdy else went wild... ah well there's always next year!!!

Mandalas on Monday ~ Colouring with Cats #10

Wordy on Wednesday with Amber #22


P.S. If mew missed our Time-Travelling Bobble Hat post and would like to join in, the Bobble Hat has landed in Florida and is now on the way to Trout Towne - so if mew're in the U.S.A or Canada purrlease consider purrticipating in helping us raise a few £'s fur kitties in need, Smooch & Parsley will purrsonally donate £2 fur effury blog the hat is featured on.

P.P.S. Oh and before we furget, we've been entered into the UK Blog Awards, so if any of mew could VOTE for us, that would be truly pawesome.  Voting finishes on Monday !
VOTE FOR US IN THE UK BLOG AWARDS
P.P.P.S  And furry quickly in other news, as I was sadly not here last week, the pawesome kitties at Katzenword.com have a give-away happening right now with my book, Basil the Bionic Cat as the prize, so if mew'd like to get your mittens on a free copy, just head offur and enter.

Other graphics used under paid licence www.canva.com and www.pizap.com
Posted by Basil and The B Team ~ BionicBasil ® at 02:00