Welcome to our weekly round-up and no we're not talking about weed-killer either! MOL

Furstly let's talk and look at kittens or a kitten 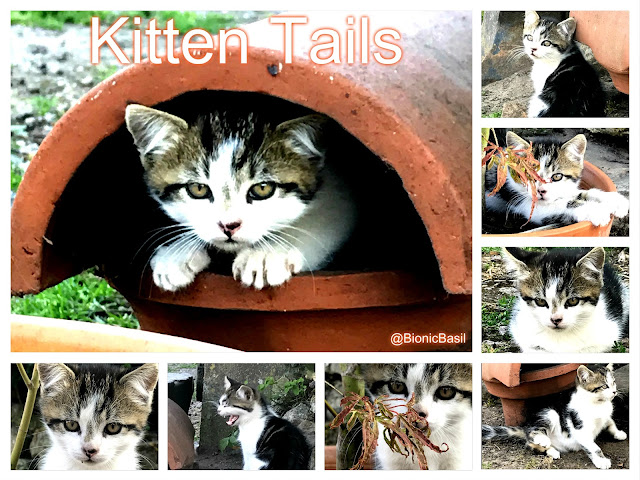 Meet Kitten #1, isn't he just so CUTE? He's just like a Mini-Me!!! #bestcloneeffur

This is the furst one that originally turned up, he's Mr Brave and comes out and lets mew give him gentle pats, the other 3 are a lot more timid, but this little tyke is a real go-getter, coming out on his own and exploring the terrain.  All the kittens have grown so much in the last couple of weeks and seem to be doing furry well.  I'm even toying with the idea to train them up fur 'The B Team' especially this purrticular one, as by his purrsonaltiy I think he'll make an excellent recruit in time.

Kitten #1 hasn't got a name yet, so if any of mew have any ideas fur a name that would be great, leave your suggestions in the comments below.  He also has another sibling that looks just like him and the other two siblings are furry fluffy, black/brown wee beasties.  We are trying to get pics of them but it's proving to be a rather tough mission. 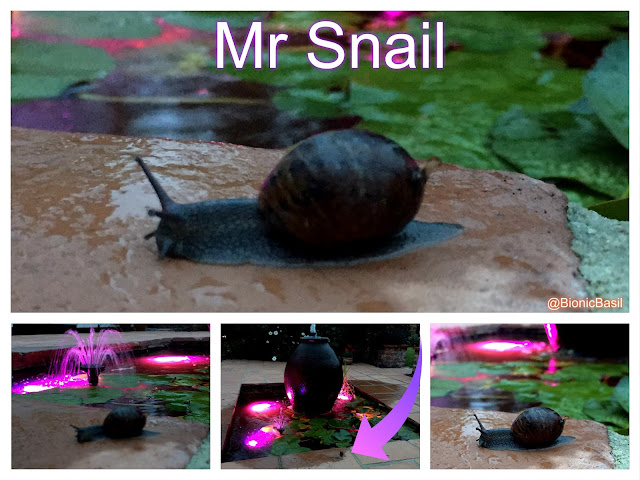 Meet Mr Snail; the other evening when I was out on 'Kitty Patrol' I came across this lone snail having a pawty fur one next to the pond, he'd got the disco lights on, the fountains running, the burds were singing, the only thing missing were the frogs, but I think they were hiding among the lily pads! MOL

As long as Mr Snail stays away from the veggies all is well in the garden, if he does eat the veggies the P.A. will take him next door and put him in the hedgerow - he has had the memo!!! 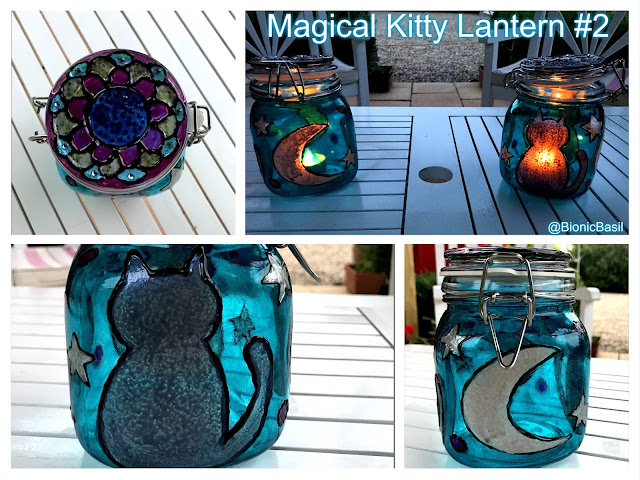 Oh and mew may remember a few weeks ago that we made a magical kitty lantern on Crafting With Cats Part III  well I'm sure we mentioned aftur that that we'd show mew our other lanterns that we made, and here they are.

They are larger mason jars that have been painted with a special glass paint, and as we're cats they obviously have cats on them and because they're fur nighttime use they also have moons on!!!! MOL MOL

We think they turned out ok, considering the P.A. hasn't done any glass painting in 20 years.

So there mew have it, snails, kitten tails and magical lanterns all in one post! MOL

We'll be back our usual Selfie Selection on Sunday, so hope mew can join us then, oh and we'll be here tomorrow too with a sponsored post if mew have time to pop by.