Fashion With Felines - Sharing The World of Kitty Couture and Apparel ~ Today's Special GUEST STAR is **ERIC'S EMPAWRIUM** & We Have A Little Give-Away Too! 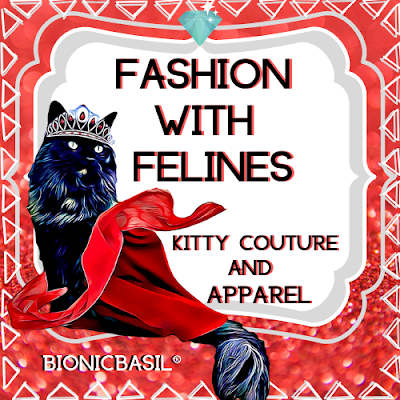 Mancat Monday was previously scheduled with Humphrey, but I Pandora Von Der Plume Feline Fashionista Extraordinaire hijacked the blog instead as today I am back with my Fashion with Feline series sharing all the latest news, gossip and trends from the world of Kitty Couture and Apparel.

This is your go-to place for all emerging fashion trends for 2020, and I'll be interviewing exclusive brands and exceptional kitties who share a love of fashion, design and dressing up too.

This week I have the utmost purrleasure introducing Eric from Eric's Empawrium which is actually only a few miles away, and even in the same county as us; Robin Hood country aka Nottingham U.K., OMC can mew believe it!  And he's a kitty with a furry generous heart as mew'll see in his exclusive intermew.

Eric is also a very talented and handsome tuxedo kitty who designs the cutest bandana's mew've ever seen, plus he model's all his own designs too, how epic is Eric?  EPICALLY EPIC! 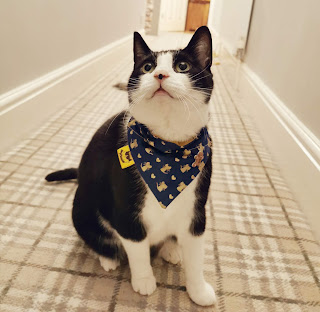 Plus Eric has an Etsy store, so if mew're in the market for a fab new bandana, he's the go-to guy to get yours. Click the link below to check out the latest creations:

Exclusive Intermew with The Designer

Eric dahling, do tell us about how mew came up with the idea for your exclusive Empawrium?

We wanted to make a little store for cats and help causes along the way by having fun. Each year we chose cat charities to share their work and donate a percentage and encourage donation drives. I love my Bandanas so I wanted to share in this by making them for others.

How long has your shop been open?

We are VERY new and just this Christmas we opened.

Where do mew get your inspiration from?

Mum has a creative brain and will very often be inspired by colours and themes which could pop up anywhere... movies, adverts and so much more.

How many designs do mew sell?

We sell over 25 designs at present but I'm working my paws on another 20 for this year.

Do mew have a favourite design or fabric?

My favourite is 'meowgical' mum says it brings out my sparkly purrsonality!

We sure do! We are expanding each day with countries so most will be available mid-year so we can keep our shipping costs compawtetive!

How easy is it for mew to source fabrics?

Very easy, mum goes to events and has a couple of lovely suppliers. We are even designing our very own this year to print! Designed by mum herself. 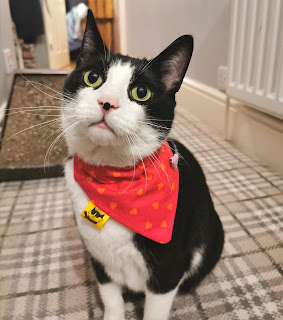 We are a little business with a great big heart! We love the pawsome cat community and hope we can help many unfortunate paws this year!

Thank mew very much for intermewing me
Eric xx

Just before we pop off, we have one of Eric's beautiful charity bandana's to give away to one lucky reader; we purrchased two a few weeks ago to support the Koala Rescue**.  Just leave a comment below to be in with a chance to win one of these beauties - FYI Eric and Melvyn are not part of the prize! MOL 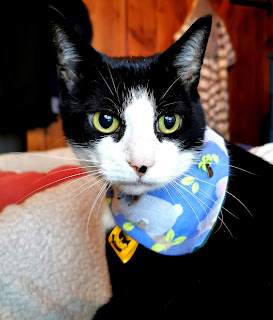 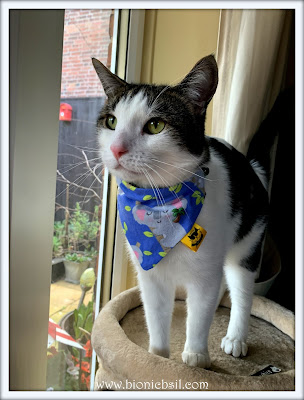 The give-way is open wurldwide** as usual, and all mew have to do is leave a comment below.  We'll do the draw for the winner on Monday 10th Feb at 5pm, so mew have until then to enter and we'll post the winner*** on The Pet Parade on the 12th of Feb.

[**Unless mew're in one of those countries that aren't allowed to join in. Mew know who mew are!]
[***Prize is as stated, and no substitutes or cash prizes will be given.  It is up the winner to send us their snail mail address after we announce the result here on the blog after the winner is drawn.  Failure to respond in good time will result in a delay in the prize being sent, or failure to respond at all will result in no prize being shipped. The rules are simple and straightforward, so purrlease abide by them.]

If mew're on Instagram follow Eric here to see all the latest designs as they literally fly off the sewing machine.

And don't furget to swing by his amazing Empawrium to see the latest range of pawesome bandana's available for mew to get your mittens on!

Very many thanks for joining Eric and me today, he's been the purrfect guest in the BBHQ Fashion Studio and an absolute delight!

If mew're a fashion-conscious kitty or have a kitty shop, do contact me for a future fashion-feature and I'll be back with another special guest star before mew know it.  The B Team will be back on Wednesday, which I've just remembered is the P.A.'s birthday, so do join us then!

This is your feline fashionista

Pandora Von Der Plume signing out until next time