Hello gorgeous library guests
and
Welcome to the Mewton-Clawson Library at BBHQ
Thank mew for joining me in the stacks today, and furstly I'd like to say a big concatulations to The Whiskeratti Crew who won my birthday giveaway and to let mew know that the P.A. is sending your goodie bag next week.
In other news, it's been a bit quiet in the library this week, in fact thinking about it I haven't really seen anyone, oh I did see that HRH ERin is doing some pawesome book reviews on Sundays at the Palace library in Upper-Much Mousing, so do go check out what's hot and what's not at the Palace.
Melvyn is avoiding me like mew wouldn't believe as I want him to start moving books into the Bunker, yes I did get Level 7 as part of my birthday pressie which was pawesome though the other not so glamorous part was a trailer load of flat-pack shelving. Anyhoo I'm not a DIYer so I'm trying to devise a plan wherein I get The B Team to build all the shelves without them actually realising they're building my library, so if mew have any idea's leave them in the comments below! MOL 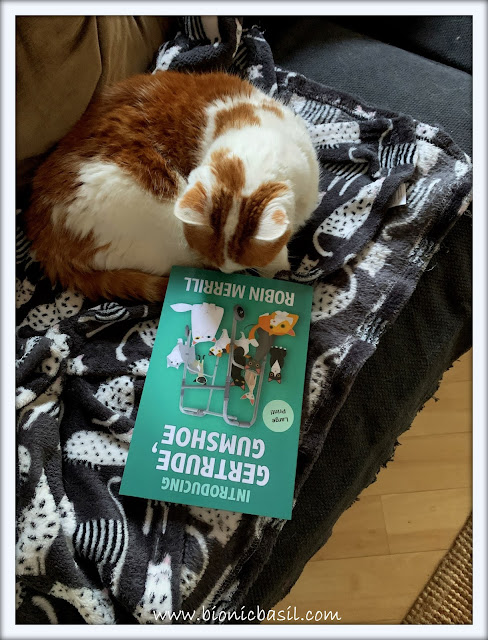 by
Robin Merrill
Here's a little snippet of the book blurb:

WARNING: Gertrude can be a bit of a crank!

She shoots from the hip, is unburdened by tact, and likes things done her way. Yet, people adore her.

Speaking of which, Gertrude never set out to be a sleuth. She was just minding her own business among her many, many collections (including her cat collection), when her neighbor went missing. With no one else around to help, Gertrude stepped in to solve the case--and found out she's got quite a knack for snooping.

This old gal, Gertrude is as crotchety as us cougars so mew know I'm going really like her immediately! MOL
Mew may have seen that I only gave it a four paw rating, that's because not only do I have the large print version as in the pic above, but also the audio and if I'm honest I wasn't too smitten with the narration hence the loss of one paw - it's not bad but not 5 paws, so probably if I'd read it, it would have five paws for sure.
Anyhoo, the book is funny, and Gertrude has oodles of cattitude and doesn't give a fluff what anyone thinks or says, she is her own women and loves her many, many cats, solving mysteries and getting her own way. In fact, she is a force to be reckoned with.
If mew're looking for a new cozy mystery series this is definitely one to add to your list, the audio version which I got from Audible is a 6 book box set so well worth the one credit it cost. Just don't focus too much on the narrator and it'll be fine.
Try it, if mew love your mysteries this is a must-have.