Welcome to The BBHQ Midweek News Round-Up ~ What The Fluff is Pandora Doing, Fudge's Giant Dickiebow and Melvyn The Work'o'Holic Gets A Promotion at The Mewton-Clawson Library

We hope that your week has been blessed so far, ours has been rather busy and it seems things are just going to get busier now the nights are drawing out and more work in the garden is required.

What The Fluff is Pandora Doing?

Pandora was caught mid-air all paws splayed, what do mew think caused this feat of aerial ingenuity or epically epic cat levitation? 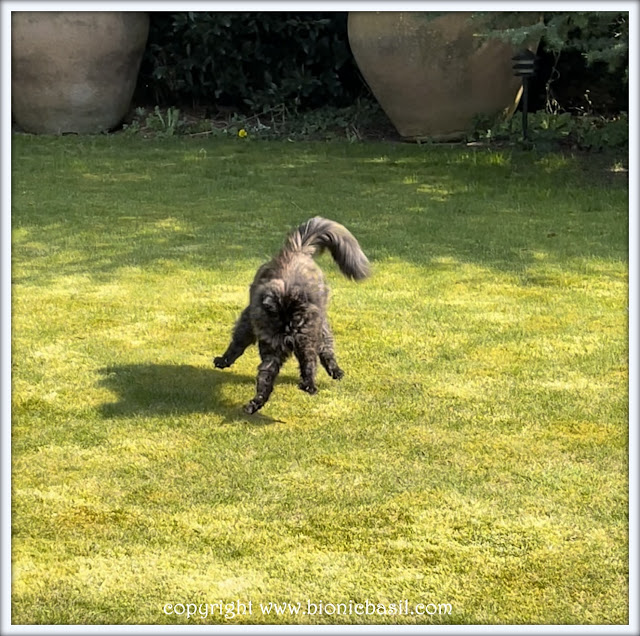 Watch what she was doing on our Instagram account, mew won't believe it, as Pandora is not the sort of kitty who usually partakes in playtime! MOL 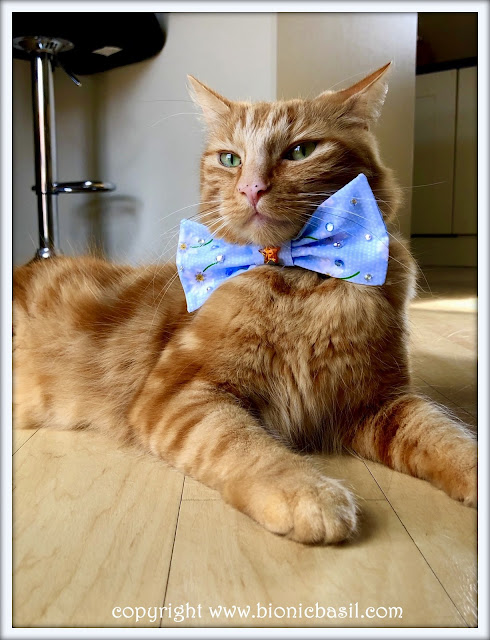 The P.A. made this bowtie about three years ago, and when she was doing a spot of tidying in the craft room she found it in a box with lots of other stuff she's made.
Fudge was very keen to model it again, even though it is a little large!

The P.A. has purromised to make us some more at some point, but this time a little smaller. 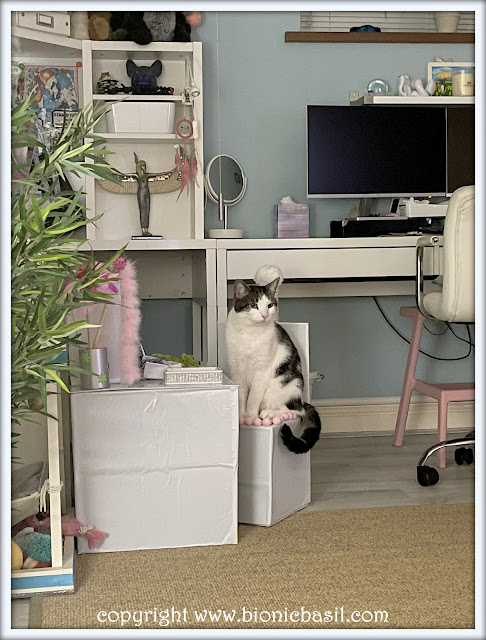 Since the P.A. finished making the new office desk and chair, Melvyn has been taking his blogging duties furry seriously. In fact, we've discovered that he's a bit of a night-owl and likes to work late while we're all snoozing.

So if mew're getting comments at random hours, Melvyn's reading your blogs and commenting on behalf of The B Team.

We think he's doing a tremendous job, and so much so that even Amber upon seeing his tenacious work ethic has promoted him from lowly unpaid intern to ASSISTANT LIBRARIAN!

Congratulations dude, and even though mew still won't get paid, get a lunch hour, or any 15-minute breaks, or any time off at all like ever, or even a catnip pension, we're really proud of mew.

Amber feels that working for her is such an honour and privilege that no monetary compensation is necessary. In fact, in true Amber fashion, she firmly believes that she should be paid an extortionate amount of cash to let others work with her and to learn the skills of a truly exceptional and unrivalled head librarian, and who are we to argue with that! MOL

No doubt Amber will tell mew all about it on Friday's post.

The hot gossip at BBHQ this week is the pond is full of frog spawn; like seriously those frogs have been seriously busy the last few weeks! 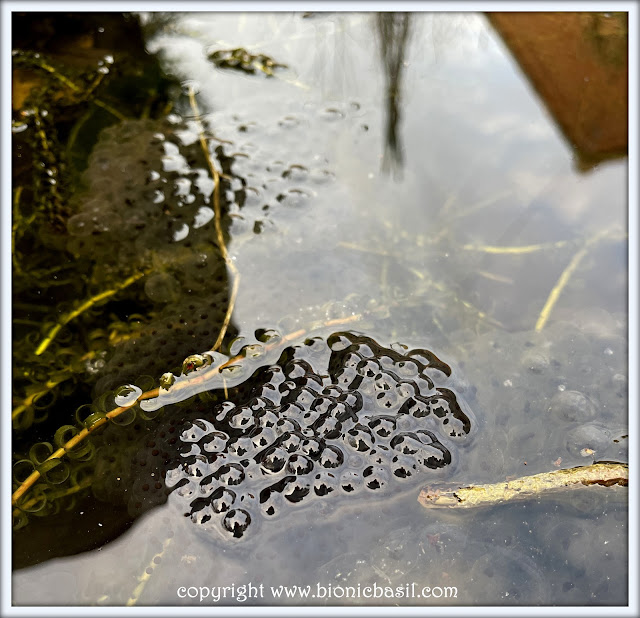 There are several large clumps in the pond, and we know there are a few frogs lurking around the garden and have been for many years.
A couple of years ago, the P.A. found one of the frogs stuck in the spout of one of the water cans. At first, she thought it was a blockage of dead leaves but on closer inspection, she saw it was a frog who had obviously clambered into the watering can and then had a change of heart, and tried to climb out but got wedged in the tight spout.
So after a considerable amount of wriggling and gentle persuasion, she finally managed to free Froggie and put him or her back in the pond, which we think he/she was quite relieved about.
We don't tend to bother with them, although I, Basil did get one many, many years ago, although I soon let it go when it squealed rather loudly.
Normally dad removes the spawn and carefully moves it to a local safe haven away from predators, to give the young froglets a sporting chance, as to be honest we don't really want hundreds of frogs hopping around the garden, jumping out on the P.A.!
So we'll keep mew posted on Frog-Gate as it unfolds.

That's us done for today, Amber will be back on Friday with another fab book just for mew, and click the link if mew missed Monday's post click here to catch up on the latest Brain Training session.