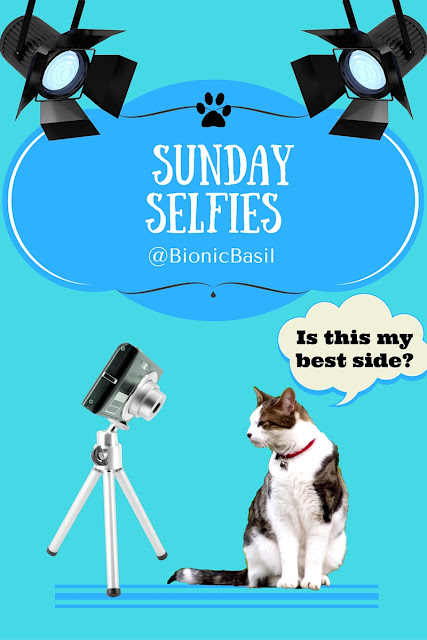 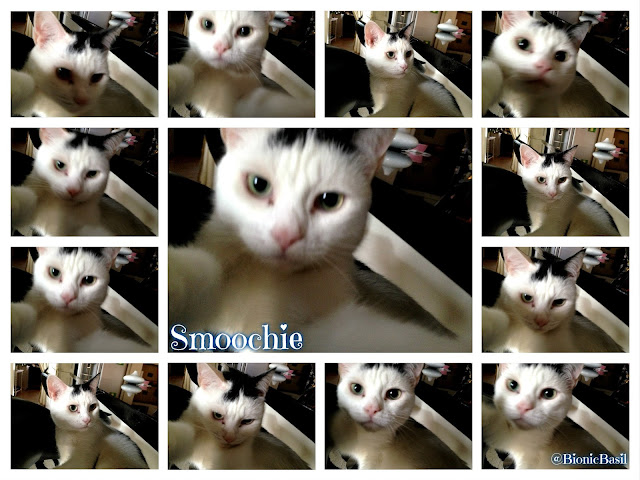 The other day I walked into the kitchen and discovered Smoochie reclining rather strangely on the bar-stool at the breakfast bar.

"Basil," he answered rather determinedly. "I am trying to take the purrfect selfie, but the camera keeps slipping... @*&*@!!!!"

"Oh!" I replied biting back the smirk that was tugging at my mouth.

"Mew have no idea how hard it is to get that purrfect picture," Smooch explained effur so seriously. "I've been here fur a hour taking pictures and still that one shot eludes me!"

I was trying so hard not to laugh as I said, "And why do mew need a purrfect selfie?"

"Well I wanted to get a really good picture fur our Instagram account and then I thought that mew could also use it on Selfie Sunday," he beamed at me.

"Oh," I replied. "Mew want to be the only one featured on Sunday?"

"Oh no, but I just wanted to look my furry, furry, cutest, bestest effur!" he smiled most sincerely.

"Show me what mew've taken so far."

"Mew have no idea the trouble I've been having holding the camera in my mittens, while my one back leg stabilises me," he murmured rather sadly.

I suddenly felt really bad and said, "Smooch I may have the answer to your purroblem."

Looking rather hopeful he said, "Really Basil, mew can help me?"

I nodded. "Just before the P.A. abandoned... whoops, went off on a big jolly to Oz she purr-chased a little tripod, no pun intended, fur the camera!" I said hastily as I realised who I was talking to, tripod Smooch. "Mew can set the camera up and there's a blue-tooth clicker to take your photo."

"Oooooohhh that's sounds purrfect," he beamed. "Can we set it up now?"

"Or course," I replied. "But this week we're using the photo's mew've already taken, showing how hard it is fur 3 legged cats to take selfies, just in case there's other kitties having the same issues!"

"But they're not furry good pictures Basil!" Smooch said quietly.

"Smooch, mew don't know how to take a bad photo, just look at mew," I reassured him. "Mew are too cute fur wurds!"

He gave me a little one shoulder shrug. "Mew really mean that Basil?"

"Indeed, most vehemently I do," I answered.

And that's how we got today's theme: 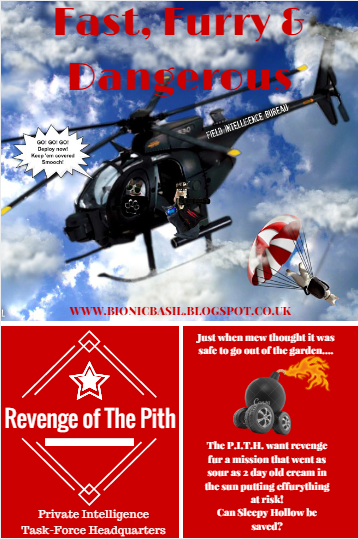