Sunday Selfies #99 MMMMMMM Are Those Chicken Nuggets Fur Us? & Blog Hopping with Cat on my Head 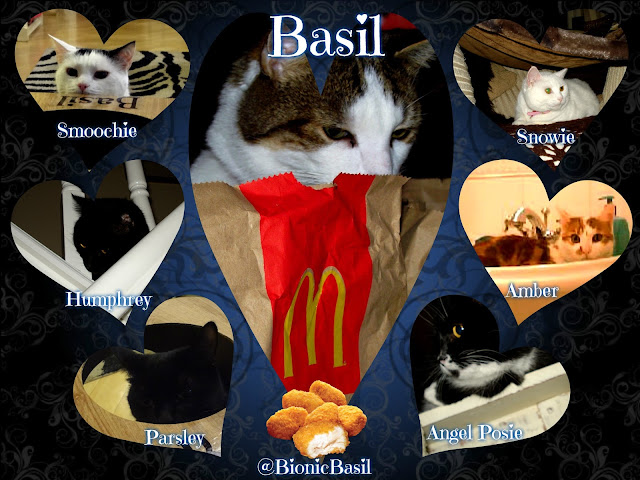 Do we smell chicken nuggets?

We don't know about mew, but on a furry rare occasion our peeps get a Macca's and we just lurve the smell and have be known to get on the front row to see if there's anything fur cats in those crinkly paperbags! [Well we are a heathen hoard MOL]

Also offur the years I have tried many-a-time to fish things out of the bag, a bit like a lucky dip but as of yet the burgers have remained just out of my reach.  If we all really, really, really, really behave Dad will take the breadcrumbs off one of the chicken nuggets and let us all have a teeny, tiny taste, which we can say is all kinds of yummy and deliciousness on so many levels. But we'd all really like a whole nugget each - this has not happened thus far!

It says on number 52 of our bucket list that we'd each like to eat an entire chicken nugget... I am not hopeful that this will happen anytime soon, not without a co-ordinated attack, which we're wurking on in the bunker.

And if mew're wundering why we haven't got the tank out of retirement and driven there ourselves, we have already discussed this many times concluding that; a: our tank would be conspicuous at the drive-thu. b: 6 cats on said tank would be highly conspicuous. c. 6 cats on said tank squabbling offur what to order would be a red alert moment.  d. 5 cats on said tank squabbling with Parsley about paying fur said order would be viral on YouTube is less than 3 minutes.  & finally the deal-breaker  e. the P.A. told us it's illegal fur cats to drive any vehicle on the public roads in the U.K. so that put paid to that MOL.

Anyhoo today our theme is:

MMMMMMM Are Those Chicken Nuggets Fur Us


Glitter Graphics  www.glittergraphics.com   Glitter Text www.picasion.com
Posted by Basil and The B Team ~ BionicBasil ® at 04:00