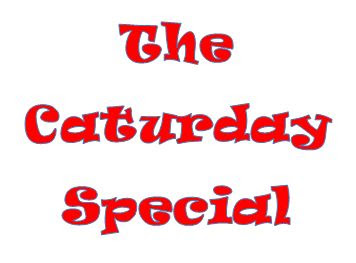 A few weeks ago the totally fabulous peeps at:

asked if we'd like to try their revolutionary claw clippers, well of course we said yes as mew know that young Parsley has claws to rival those of Wolverine! MOL  And not only that, Parsley hates going to the VET with a passion of PASSIONS.  Last time he went he needed a blood test - nothing serious we must add;  3 veterinary nurses and one hour later they'd only managed to shave a small area on his chest.  As fur the drawing of the blood, it neffur happened as the P.A. called time-out and promptly brought him home.  Anyhoo, the last time he had his claws trimmed, that was equally as traumatic and he hated effury moment of it.

So to be able to get a Zen Clipper to use at home has been fabulous. 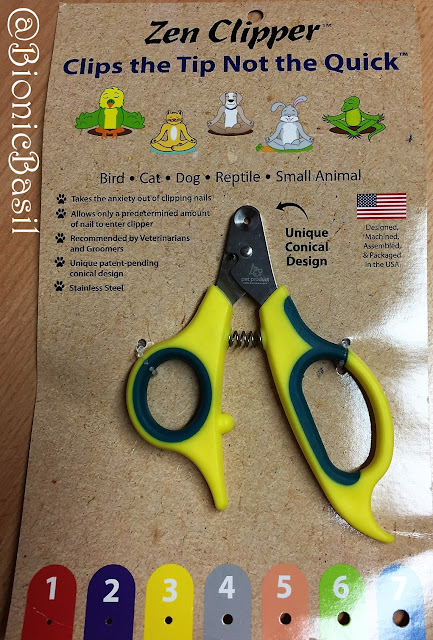 Furstly, mew need to make sure mew get the right size, this is furry importante - this can be done by downloading their size sheet or emailing them direct and asking fur a card sizer; and then all mew do is snaffle a passing kitty, and carefully insert a claw through the holes in the card following the instructions to find the exact size.  It's all furry simple!

Also we must mention that the P.A. had a rather nasty accident involving her right thumb and a really sharp piece of metal a few years ago, this left her with a severed tendon, nerve damage and a 2" scar running offur the knuckle towards the underside of her wrist, so she has little or no feeling along the inside of her thumb and her hand span was considerably reduced.  The injury has made using certain scissors a bit of an issue, howeffur this is NOT an issue with the Zen Clippers as the supurr clever peeps who designed them, made them sprung-loaded - we have to say GENIUS guys, and WELL DONE!   This alone give you top marks! MOL

So now mew've seen the P.A.'s manky [MOL!! aren't we nice kitties?! MOL MOL] hand in action, and if she can use them, mew can too ~ dexterity issues are not an issue with this product.

So now onto the real test, how did they fare in action?

Smoochie was conspicuously absent as we, The Heathen Hoard had a little meeting.

"So we need a willing victim," I began. "Sorry I meant to say willing volunteer to help the P.A. snip-test these new clippers... paws up who wants to be IT?!"

At that moment Smooch ambled into the kitchen and sat under the sideboard.

I grinned at the rest of the hoard and said. "Ah divine intervention at its furry best!"

Smooch gave me a rather puzzled look and I continued. "Smooch, dude can mew help the P.A.?" 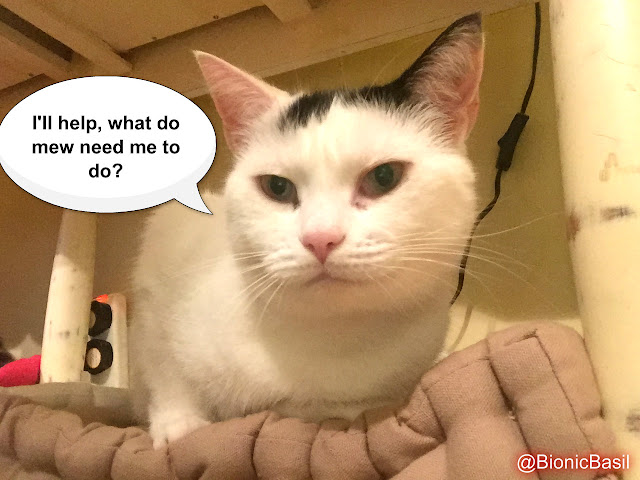 "I need mew to sit there, stick your leg out and let the P.A. trim your back-toenails, ok?" I said.

"Oh sure no purroblem at all!" Smoochie replied and promptly stuck his leg out. "Like this?"

I nodded and said. "Purrfect dude!" 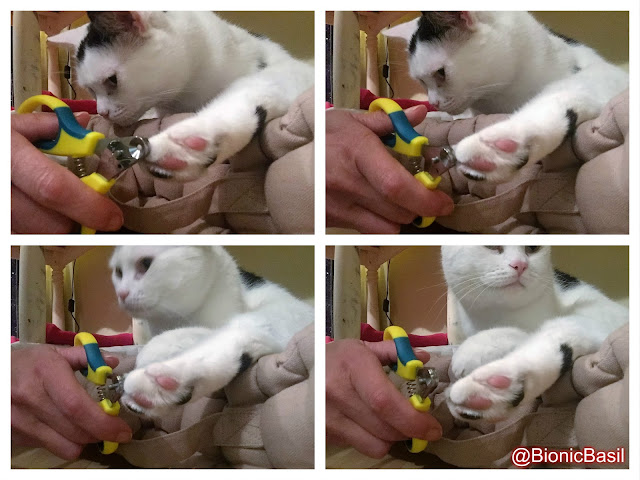 As mew can see he just lay there and took it like a real man-cat!

Two snips and it was done, no fractured nails, a beautiful clean cut and the clippers were totally silent too.

Fur those of mew that don't know, Smoochie is a tripawed kitty; he was hit by a car when he was a semi-feral kitten at the P.A.'s wurkplace [the P.A. had been slowly taming him and his siblings].  Anyhoo, she & dad took him to vet only to learn his leg was so badly damaged a full amputation had to happen.  So keeping his back toe-nails trimmed is vital fur him! 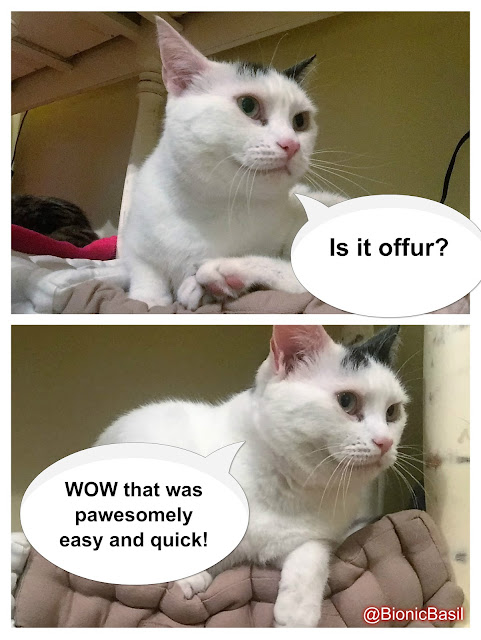 The P.A. was so impressed with him she just had to give him a kiss! 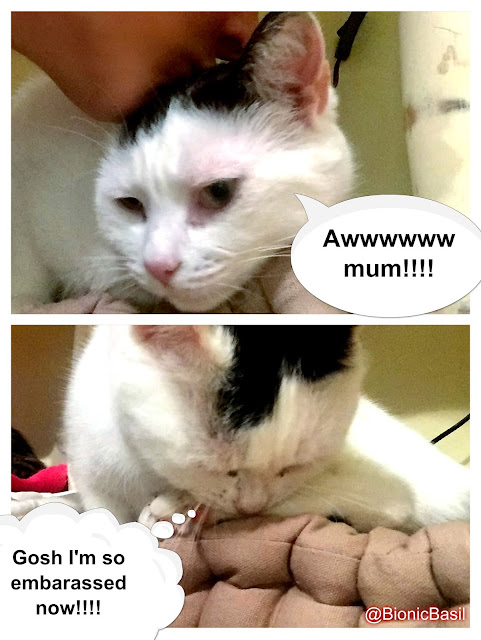 These are our findings aftur the Zen Clippers were Smooch-tested:

A truly amazing product, easy to use and from a safety point of view fur claw clipping, as long as mew have the correct size and follow all the guidelines mew will neffur trim anything other than the nail, neffur the quick.  Plus mew can do it at home, so no more traumatic trips to vets with squirmy kitties that are already stressed-out by the time mew get there and another bonus is - it saves mew money in the long run = WIN WIN WIN.

I know we made it look supurr easy today and believe me when I say, it was supurr easy with Smooch.  Parsley howeffur may be at the other end of the spectrum and will probably have to be swaddled in a towel, this we have yet to discover when dad gets back from his trip in a few days because it will definitely be a two-peep job.  But we're 100% sure Parsley will be more relaxed at home than at the vets, and we're hoping he surprises us all and has a no-stress claw-clipping-session.

All in all, we give the Zen Clipper TOP MARKS!

We would like to say a special thanks to the pawesome peeps at Zen Clipper fur giving us the oppurtunity to Smooch-test their most excellent claw clippers ~ THANK MEW FURRY MUCH!

*FYI: Even though we were given this item/s free of charge for a review, our review is completely honest and reflects our own experience with the product/s*