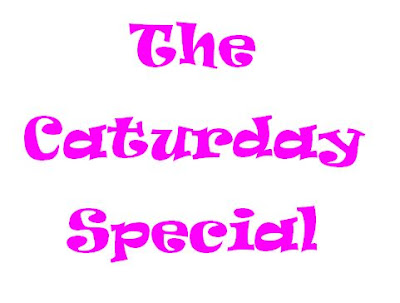 Just before the P.A. abandoned, sorry left us fur her trip to OZ the totally fabulous peeps at:

asked if we'd like to try their new cat tracker, well mew could have knocked us offur with a feather as only a few days before the P.A. had said,

"I really need to get a cat tracker for young Parsley!"

Mew see, young Parsley has a habit of disappearing fur hours and hours and hours, then the P.A. has to go and do the 'search pawty' thing, which can take hours! MOL  Unlike me, who comes back nearly effury hour on the hour, has a little nibble of something delicious fur a quick refuel and then goes off again.  Parsley hasn't quite got the hang of things yet, and he gets caught up in his 'Kitty Patrol' duties and loses track of time.

Anyhoo, I'm digressing so the amazing peeps at MiauFinder sent us this cat tracking system and at the weekend we got to test it out, so are mew ready fur 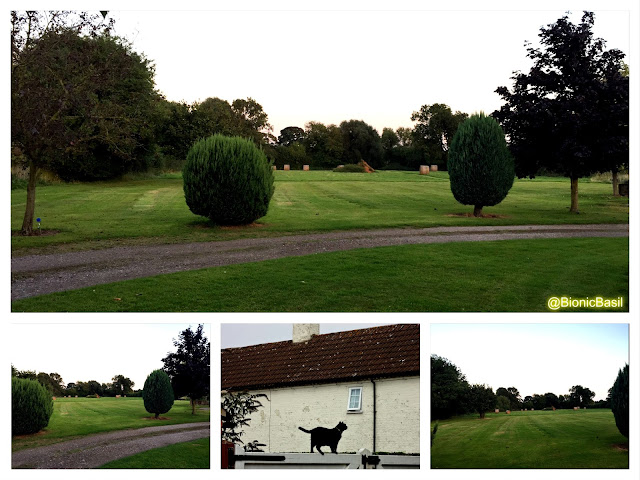 ...not exactly your typical back yard or garden.  The field is approximately 4 acres and then he can go right through the hedge into other peeps garden or further down the field and into the village park.  If he goes straight on into the treeline, there's a small dumble and then arable fields beyond.  To the left is Kevin the cats garden [may mew rest in peace Kevin, we miss mew] and then further down a small paddock which leads to more paddocks.  So there's quite of bit of ground to cover fur our Patrolling Services.

When we came to open the box, we found a small device with an antenna to attach to Parsley's collar,  the handheld tracking unit, instruction booklet and a mains adapter, plus a set of earphones and several mini cable ties. 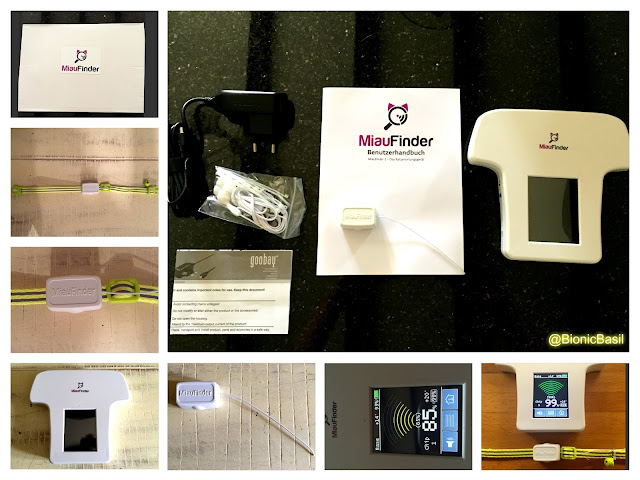 The handheld unit takes 3 x AA batteries which were included and the actual transmitting device is really light, and takes a lithium CR2032 battery, which lasts about three months and is easily changed.  The really great thing about this system is that you can have up to 10 transmitter devices paired with the handheld unit. So if mew have a lot of kitties, mew can track them all at once! MOL  And it has a range of a kilometer which is furry useful.

Anyhoo, we attached the small antenna to Parsley's brand new yellow high-vis collar and turned on the handheld unit to get a baseline reading.  Then young Parsley decided he needed to limber up a bit and spent a few minutes stretching. 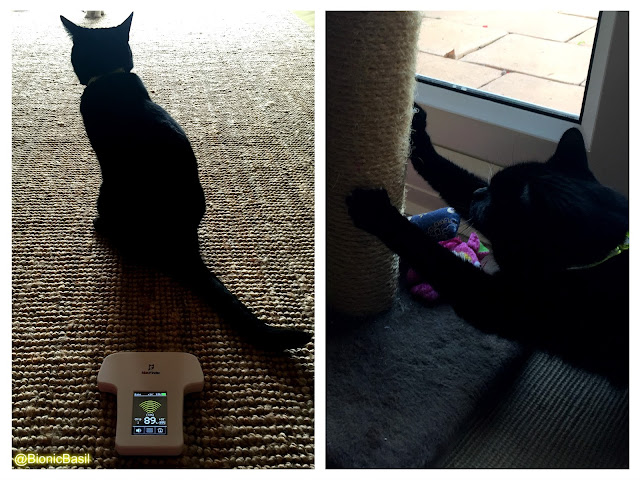 When he'd sufficiently limbered up we entered the airlock [aka the porch] and had a brief meeting. 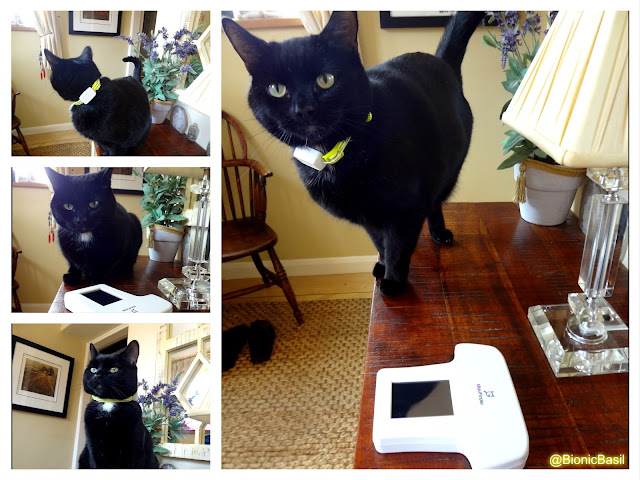 "OK Parsley," I said seriously. "I'm going to count to nine hundred and elebenty two, so mew have plenty of time to go and hide or do what mew do!"  [I'll be having a nice little nap I thought to myself].

"We play hide and seek effuryday with the P.A.!" I replied.

"Yeah mew're right," he said and grinned widely. "This is going to be great fun Basil!"

I nodded and pointed at the door, then added. "Your mission should mew choose to accept it is to go get lost!"

Parsley ran out of the door laughing and shouted, "Find me if mew can!"

After investigating effurything in our garden, he breached the perimeter gate and off he went into the wilds of Sweepy Ville. 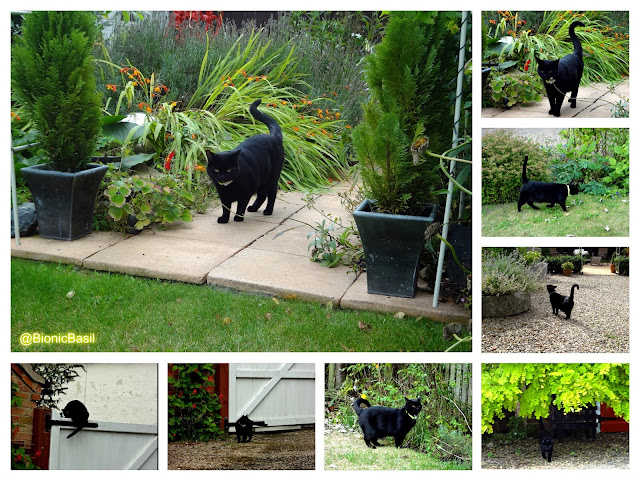 Two hours later after a thoroughly delightful nap, I roused myself and stretched, then I went to find the P.A. and said, "It's time to track down Parsley!"

"OK Basil let's go!" the P.A. replied as she switched on the handheld tracker.

Smoochie suddenly appeared as said, "Are we going on this mission or what?"

"And then there were three," I answered just as the lightweight tracking unit burst into life. 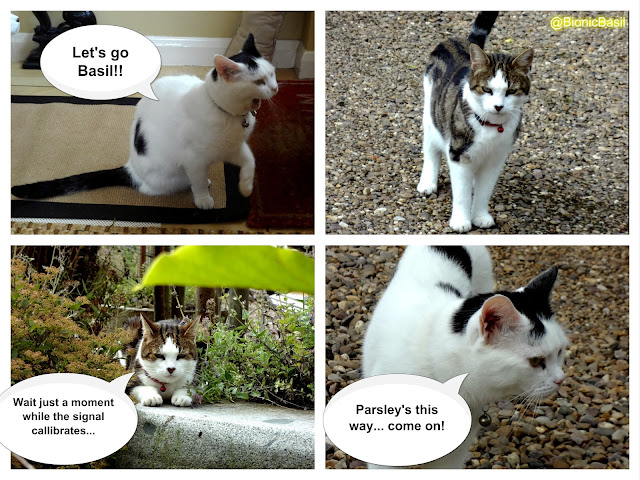 The screen lit up and it began to beep, beep, beep.... and off we went into the great outdoors!

We ambled out of the gate and carefully checked the readings.

"Hold your horses!" I said. "We need to get the P.A.'s cousin, as he's going hold the tracker while the P.A. takes pictures."

In two shakes of a lambs tail, the Parsley hunting pawty or P.H.P. was fully assembled and we were avidly watching the screen and listening to the beep... beep... beep.

In fact the P.A. said the tracker reminded her of the second Aliens movie, the only thing missing were the incoming dots on the screen when the aliens were approaching.  She said she was really purrleased that there were no aliens in Sweepy Ville! MOL  MOL [If only she knew the truth!] 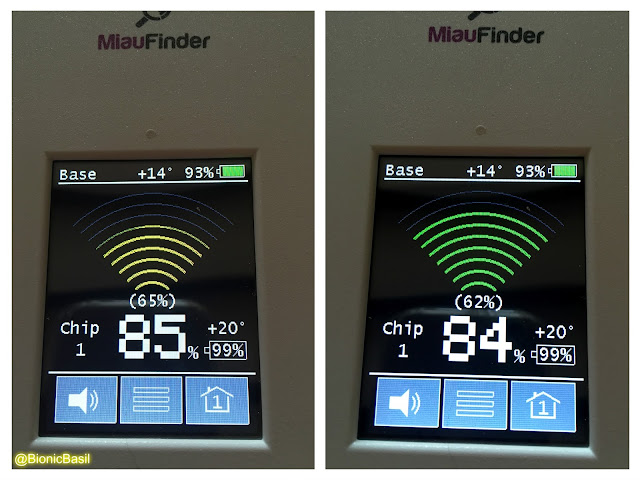 After a few minutes testing all the different directions Parsley could have gone, we arrived at the bonfire [not lit of course] and got a positive fix.

We honed in on the signal and headed towards to really dense hedge that led into one of the smaller paddocks down the left-hand side of the field.

Standing next to the hedge the reading said 93% and that's when we heard the small 'mew'.

The P.A. called out, "Parsley! Parsley!"

The mew was louder and two seconds later he burst through the undergrowth.

"Mew found me!" he cried excitedly and rolled offur in grass. 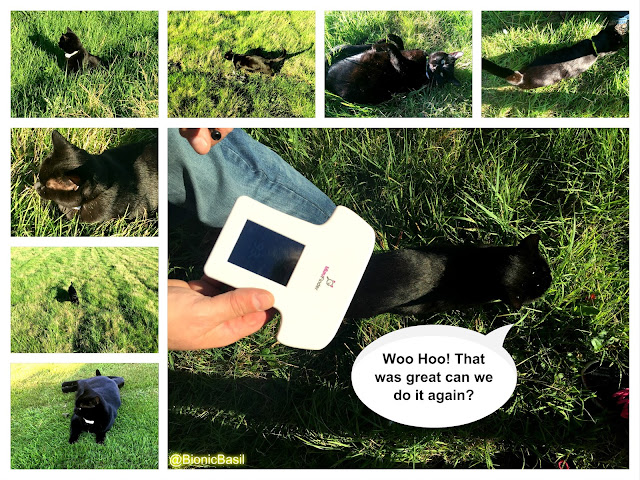 It took us approximately nine minutes to find him with the aid of the MiauFinder which is amazing as the P.A. can call him for ages and ages and still he remains more elusive than the Scarlet Flumpernel much to her chagrin!! MOL

We have tested it most evenings this week, and have had similar results, finding Parsley within fifteen minutes or less, which has delighted the P.A. immensely as she can now pinpoint his location and snaffle him before bedtime.

All in all this is a pawesome cat tracker and Parsley doesn't mind the small unit attached to his collar either.  In fact it's brilliant as sometimes he comes home collarless, so if this happens in the future we can go and locate it.

We would like to say a special thanks to the pawesome peeps at MiauFinder fur giving us this oppurtunity to field-test their most excellent cat tracker and had great fun while we were doing it ~ THANK MEW FURRY MUCH!

By the way, there's still time to enter Parsley's Birthday Give-Away just leave him a comment to be entered into the free prize draw fur a surprise bag of goodies - we're shipping wurld-wide too!
Happy Caturday
Basil & Co xox

[FYI: Even though we were given this item/s free of charge for a review, our review is completely honest and reflects our own experience with the product/s]
Posted by Basil and The B Team ~ BionicBasil ® at 04:00