Many apologies fur missing last week, only the P.A. bought a couple of new supurr-soft teddybear blanky's fur the sofas in the sitting room, and believe me when I tell mew that anything supurr-soft is my own purrsonal kryptonite.

It's true, give me some softness and I'm rendered completely inert, sometimes fur days.  I just can't help it, it's like my mind becomes so focused on the softness that I furget effurything else that's going on... it's just like being in a trance-state-of-total-softness or TSOTS.

I've tried to offurcome this rather debilitating condition but from my research and the testings of many different styles of blanky's throughout my life, it's always the same;  Softness = Complete Inertia Recurring or S=CIr 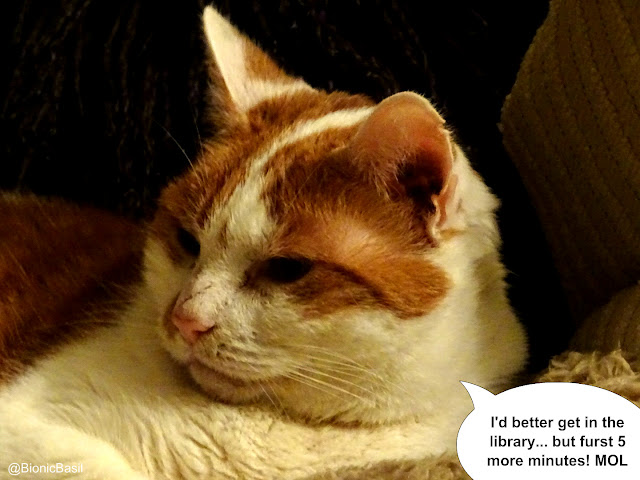 If any of our fab furriends are in the scientific field I'd love to know why, and am I the only kitty in the wurld that suffers from this condition?

Thank goodness Basil and the rest of The B Team decided to put a poll on the blog on Friday fur mew to vote, as without that I don't think mew would have seen me fur months as my motivation to move was in the severe negative! MOL - OOPS!

When Basil last showed me the results of the poll on Monday, 70% said I'd DEFINITELY make it fur this week*, 22% said PURRHAPS I would make it and 9% said NO WAY -  Parsley and Smooch I know that was mew who voted fur the No Way - we'll be having wurds later!

* Thank mew fur believing in me

So this week, to make up fur my futile failings of last week, I'm sharing the next 3 books in the Oxford Tea Room Mysteries.

A sinister phone call in the middle of the night throws tearoom owner, Gemma Rose, straight into the heart of a new murder mystery - this time with her friend, Seth, arrested as the key suspect! The mysterious killing in the cloisters of an old Oxford college points to a bitter feud within the University - but Gemma finds unexpected clues popping up in her tiny Cotswolds village.
7 hours and 40 minutes

Book 4 Till Death Do Us Tart

When Oxfordshire tearoom owner Gemma Rose enters her little tabby, Muesli, in the cat show at the local village fair, the last thing she expects is to stumble across a murder. And when her meddling mother and the nosy Old Biddies decide to start their own investigation, Gemma has no choice but to join in the sleuthing. She soon finds there's something much more sinister sandwiched between the homemade Victoria sponge cakes and luscious jam tarts!


Cotswolds tearoom owner Gemma Rose is excited to join the May Day celebrations in Oxford...until the beautiful spring morning ends in murder. Now, she's embroiled in a deadly mystery - with four nosy old ladies determined to help in the sleuthing! Before she knows it, Gemma finds herself stalking a Russian "princess" and keeping up with the Old Biddies in Krav Maga class, while still trying to serve delicious cakes and buttery scones at her quaint English tearoom.
7 hours and 46 minutes

As mew know I've really been really enjoying this purrticular series, and I've just finished book 5, as that's the last audio version in the series. There are another 2 books, but as of today's date, neither has been turned into an audio version yet, I'm hopeful that it won't be too long as this series is really, really good.

The books follow straight on from one another, so there's no huge gaps in the time-line, it's just like a constant flow of what happens next, which I do like furry much, as mew feel like mew haven't missed a thing. The characters get more and more interesting, and yes, there is a bit of a love triangle and relationship ups and downs, but that is a sub-plot so neffur offur-shadows the main storyline.

The entire series kind of has a Miss Marple vibe, though a fully modern version, so if mew like Agatha Christie, I believe mew'll really like these too.

And as soon as books 6 & 7 are available in audio format I'll share those too!

I do hope mew enjoy these books if mew decide to give them a try...

...and if mew've read them already, which is your fav book thus far?