Speshal Announcement From The P.A. ~ I Would Like To Say Thank You ~ And The B Team Have Some Epic News

Hello dearest friends, readers, followers and all those who stop by when they can

For those of you who might not know, my name is Cathrine, and I am the P.A. to The B Team.

It's quite unusual for me to actually make an appearance here on the blog, or anywhere else for that matter, [I am for want of a better word, rather reclusive] but I am here today as I feel it is most important for me to personally express my gratitude to you all.

To thank you on behalf of myself, my husband Josh and The B Team for coming To Basil's Final Farewell.

For the last couple of weeks I've been trying to visit everybody who came to Basil's Final Farewell, but I'm really struggling to find the words to express my thoughts and feelings for all the love, support and kindness that you have showed my family and I in our darkest hour, and the endless sorrow that we've found ourselves stuck in since our beautiful Basil departed.

The tears have not stopped, the angst has not stopped, the endless turmoil in my mind has not stopped.  I feel beyond desolate, and then I feel so incredibly angry/upset/frustrated that there was nothing I could do to save him, and as you probably know I would have done anything, anything at all to save my fur-baby.

The phone call I received from the vets to tell me the results of his biopsy and tests replays over and over in my mind everyday.  And in that moment, with that one phone call my entire world lurched sideways, slipped out of orbit and was changed forever in under 5 minutes as I learned the awful truth. Never in a million years did I suspect it was terminal cancer.

Basil was such an extraordinary little purrson, and yes, all cats are extraordinary in my opinion, though Basil did have something more; he was so tuned in to everything around him and he had such a sense of knowing.  He was like an old soul, one of those kitties who you would just have to stop and do a double-take, he had such presence yet took everything in his stride with such confidence and poise.

As he got older, especially after he got pancreatitis in November 2016 I would pick him up to put him on the bench-top/counter in the kitty-kitchen - he never liked eating at ground level - and as I'd gently lift him to his place, he would make the cutest little warble, as if to say, 'thanks mum, I really needed that boost up here.'  I put Amber's* little step-ladder [*and surprisingly she didn't actually complain!] from her library next to the bench top so he could get down easily when he'd finished.  You know there are so many things he did that are ingrained in my mind; he would lift the window catches and open the windows, thus enabling The Great Escape at the most inopportune moments. He'd tap me on cheek on in the mornings to wake me up, and it that didn't work, he'd tug my eye-shades, and if that didn't work he'd gently nibble my hand and in extreme cases he'd pull my hair - I really, really miss the Basil alarm and his super cute heart-shaped nose.  Smooch does a great job with his early morning wake-up calls, but no one could ever take Basil's place.

He also had such a cheeky side and was epic at keeping the rest of The B Team in check. Once a day he'd bat most of them gently on head, as if to say, "Dudes remember your place in the pecking order!"  Smooch loved to groom Basil and most days would give Basil's ears a proper cleaning session, Smooch would then dip his head waiting for Basil to reciprocate, though Basil would often just nibble his ears, not the response Smooch wanted but he still took it and relished in the fact that his ears were getting a little action in return.

Since his departure, as many of you know; your home feels it is missing something, it just doesn't feel right, the energy is all wrong, it's just not the same.  Even The B Team haven't been the same since...

Your comments on Basil's Final Farewell, showed how much he was loved around the world and how much he will be missed, and not just by us at BB HQ.  Basil has built a legacy and though he has physically moved on, he will live on forever in spirit, not only here on the blog but also in his books.

If I'm honest, I can't actually do the blog or the stories without him, as for me it can't work and he can't be replaced by a new Commander as there can never be another Basil - ever, he was the boss so after a few months R & R at the Bridge he will be back in his spirit form to take charge and keep the rest of The B Team in check.  I know to some that may sound a little odd, but for me it is the only way to continue Basil's Blog.

What I'm trying to say is this... Basil will always be here on the blog and that will never change, as without him at the helm steering the ship, it's not the same, he was such a pawesome commander, he was my total inspiration and the most magnificent muse a crazy-cat-writer like myself could ever wish for, and without a doubt I will miss him forever.

I'm not saying that we won't adopt another kitty at some point in the future to join the gang, because it's inevitable that we will, The B Team will expand again and it will be lovely to give another little unwanted soul a beautiful forever home and have a new B Team Memfur to keep us on our toes.  And when that does eventually happen, you guys will be the first to know.

Thank you from the bottom of my heart to everyone who sent us such heartfelt cards and tributes for Basil, we cherish each and every one... 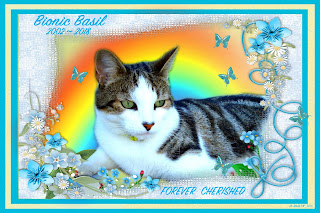 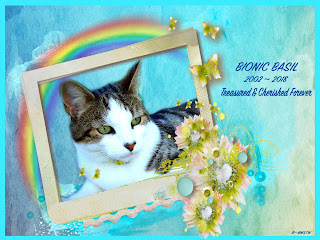 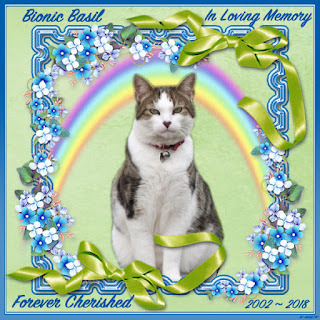 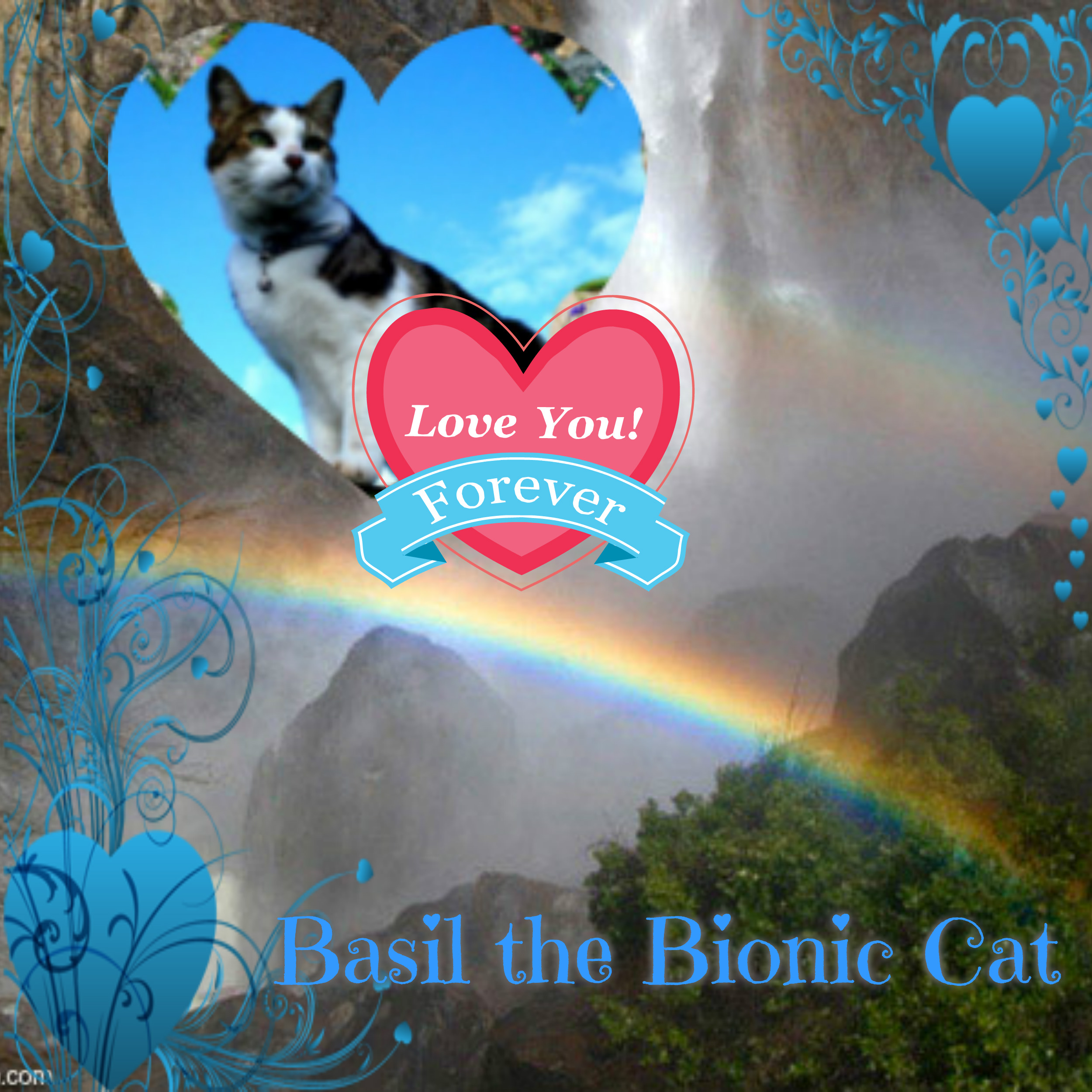 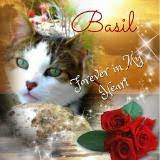 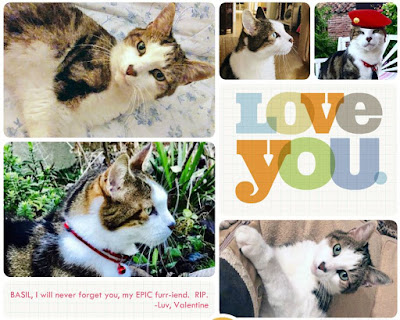 Sir Snowy composed this in the week before Basil departed... it still makes us cry..

Just before I run back and hide in my cat-cave, I do have some truly epically epic news to share...

On Thursday last week, Basil received an email from www.vuelio.co.uk in London to say:

Congratulations on being shortlisted as a finalist for the Best Pet Blog at the Vuelio Blog Awards 2018!

The first Pet Blog Award Category in the U.K.

Well, you could have literally knocked me over with a feather, rolled me in treacle and dipped me in catnip - as The B Team would say - and I couldn't have been any more surprised.  Seriously, I was astounded, shocked, delighted and thrilled that Basil and The B Team have been nominated for an award, but also it has been quite bittersweet, as I couldn't tell him in purrson, or share the joy with him and tell him how incredible he is and what an epically epic job he's done with the blog, and all those other funny, little things I'd have normally said to him before I told the rest of the gang.

But dude even at the Bridge, I know mew know!

So thank you all once again, I can't begin to describe or explain how much your comments meant to us, just know that your words helped more than you could ever realise and if there's one thing I'm certain of; there is no greater place than the pet blog'o'sphere, you guys are epically epic and I feel so blessed to be part of such a beautiful online community... 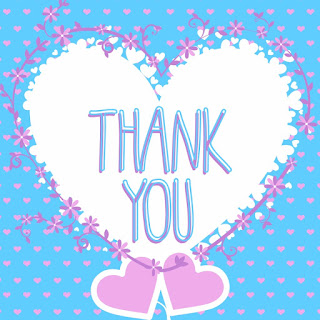 Much love to you all

P.S. Tuesday Tails will be here on Thursday when The B Team will share a double episode to make up for today.

Graphics created with paid licence www.canva.com
Posted by Basil and The B Team ~ BionicBasil ® at 01:00
Email ThisBlogThis!Share to TwitterShare to FacebookShare to Pinterest