The Catmas Laundry Make-Offur on The Pet Parade 281 with Dash Kitten, Us & Barking from The Bayou

Welcome to The Pet Parade and our weekly news round-up!

We do hope your New Year has got off to a terrifically fine start, ours is totally pawesome as Basil's back from the RB, in his angelic form of course fur now.

So OMC, what the fluff happened to us since last Thursday, it was like we fell off the planet... would mew believe us if we told mew we'd been held captive in some weird time space continuin-anom-nom-nom bubble since late last Wednesday evening battling some strange alien creatures again? Well as exciting and as normal as that sounds fur BBHQ, that's not the case at all! MOL

Our absence is much easier to explain and a lot less exciting... the P.A. in all her wisdom decided that the laundry needed redecorating - she's actually been putting it off fur the last couple of years as the cupboards and wooden wurktop needed a spruce up too.  And we've not been feeling furry festive if we're honest... it's been a tough few months at BBHQ.

So a week last Caturday the painting bug ambushed her and grabbed her by the shoulders, giving her a rather vigorous shake and so she headed off into the shed in search of paint.  A while later [we nearly had to send a search team aftur her - she emerged from the archives carrying all the supplies she'd bought 2 years ago to do the job.

She said and we quote, "This shouldn't take too long!"

Famous last wurds or what?! MOL

She finally finished on New Years Eve, so that's why we haven't been about much as things took considerably longer than anticipated, but the great news is the laundry now looks epic.

Fudge was best purrleased especially when he saw all the mini TTTB [Time Travelling Telephone Boxes] lined up in the cupboard and had to do a double-take. 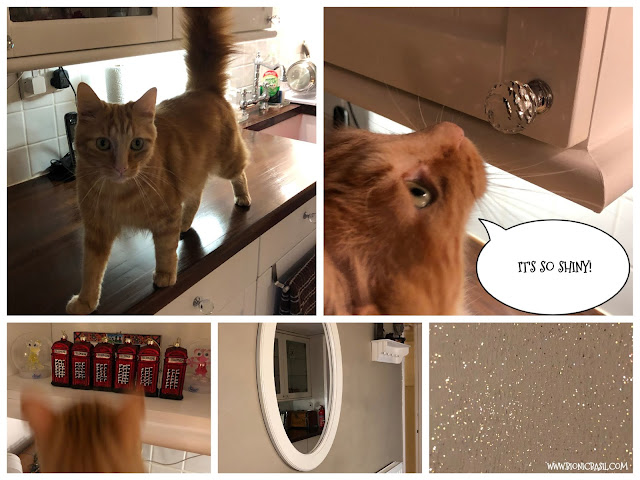 We've got a new colour and new sparkles on the walls - glitter paint is a must here - the units have been painted in a flat white eggshell [2 coats of undercoat and 2 coats of eggshell], the solid beech wurktop was a strange orangey colour which we found most offensive but now aftur using 2 coats of darker wood-stain it looks like dark oak - amen to that!

New crystal door knobs were applied to finish the cupboards and effurything now looks epic, the only purroblem is this...

As there weren't any new posts much this week, here's a few completely random ones from the past year:

Amber will be here on Friday with a fantastic book she can't wait to share with mew all, so do stop by the library, tea and nip cookies will be served, and we hope to see mew then!