Welcome to The BBHQ Midweek News Round-Up ~ Smooch Is Keeping The Catnip Warm, Snuggling with Fudge and Pandora and Melvyn Can't Decide What To Wear

It's been a bit fresh at BBHQ the last few days, and there we were thinking that the weather was going to warm up again; we were wrong!

And to make matters worse, energy prices and oil prices are at an obscene level. A level that is unsustainable for the vast majority. Mew know we don't really talk politics or current affairs here, but today we're making an exception.

Sadly the British Government has bitterly betrayed the British public and left them high and dry along with inflation rises, NI rises, Tax rises, and stealth taxes applied to drain the UK citizens even further.

How can a man who is richer than the Queen possibly have a grip on what or how an average family spends in a month to live and pay expenses?

How is it possible that the UK energy prices have gone up 54% when everywhere else in Europe it has only gone up approximately 4%? OK, so we're not part of the E.U. anymore, but why does that equate to such a drastic rise? Who the fluff negotiated a deal like that? A single-cell amoeba could have negotiated a better deal! It is a joke, a literal joke that we are in this position.

But the truly devasting thing is that no one in our worthless government is doing a single thing to resolve these heinous price hikes that are nothing more than highway robbery, while those energy companies literally bath in billions of profit each year and pay such tiny taxes because their companies are held in tax havens around the globe.

And the average citizen is taxed to death daily; the system is wrong, it is flawed beyond comprehension and yet the people in power throw away taxes collected from us like confetti, and when they've wasted and burned through billions, they apply even more taxes on us to pick up the shortfall.

Then they look at selling our national health service and selling anything they can to fill their coffers from misplaced spending and flawed, antiquated systems which benefit a few greedy and corrupt sectors and individuals. We used to really love Great Britain, but over the past 20 years it's become Grotty Britain, the roads are full of potholes, and there's litter dumped everywhere. Attitudes have changed dramatically, everyone wants to be the proverbial queen bee, yet most don't realise that to run a successful hive there needs to be worker bees too, and therein lies the problem. If there are no worker bees anymore to keep the machine's cogs running smoothly, everything will grind to a halt.

This new system and trend which has evolved over the last couple of decades will be the undoing of everything. The world ran like a hive, but now everything is unbalanced, so systems will fail, which in turn will cause others to fail until it all ultimately fails.

If mew look throughout history at great civilisations around the world that collapsed and historians and archaeologists have no answers as to why they failed. This is why they failed; we are actually living it now. Look at the fall of the Roman empire, a society that was the most advanced and forward-thinking of its time, full of prosperity and it failed.

They talk about climate change, the biggest climate change offenders are the big corporations, yet they want the general public to pay to fix everything. Everyone has got to have an electric car, but how is it possible to have one when the price of electricity is now so expensive, plus the actual cost of the vehicle itself is as much as a regular combustion engine. It is not a feasible solution, and there's zero incentive to have one.

We said 20 years ago that cars of the future should be fully self-charging with a dynamo/kinetic system, they should have solar panels built into the roof and bonnet, so they cost absolutely nothing to run. This technology is available, though there's no profit for greedy corporations with a vehicle like that, is there? So that's never going to happen.

Why do solar panels cost so much, if the world's leaders are so concerned about climate change, and why do they allow new build houses to be constructed without solar panels fitted? All new builds should be fitted mandatorily with solar energy. Our government is pushing air source heat pumps as an alternative for regular heating boilers, they cost upwards of 20K, like wow, who's got 20K to fit one? There is a government cashback scheme to recoup a proportion of the cost, but still, that's an enormous outlay for anyone. And after speaking to several sources regarding this new type of heating, the general consensus is that mew can have heat or water, because most of the systems are not man enough to provide both effectively, so therefore mew'd need to have another system in place to heat your water unless mew spend thousands more on a more powerful system, which kind of defeats the object.

The world is broken, and we don't know if it can be fixed. This great reset that is being spoken of, if it comes to fruition will only benefit the 1% as they will have their luxury islands to live on far away from us, and the others that we have seen on social media saying they'd love society to collapse so life would be more simple again are utter idiots.

That is a fanciful and romantic notion beyond absurdity. While it might be ok for a few days, the cold reality of such an event is this: no water, no power, no heat, no facilities, no hospitals, no medical attention at all, no food, no transport, no safety, no creature comforts whatsoever - no coffee to go any more peeps. It would not be fun at all, it would be a desperate battle of survival in a lawless world, and don't think for one minute that a little veggie patch in your back garden is going to save mew because there will be marauding murderous gangs rampaging for supremacy and supplies, yes it will be like a post-apocalyptic movie only worse.

We can now see why Mr Musk wants to move to Mars; perhaps he can take The B Team with him!

Now we've got all that off our chest fur, let's tell mew about what's been happening at BBHQ this week.

Smooch Is Keeping The Catnip Warm 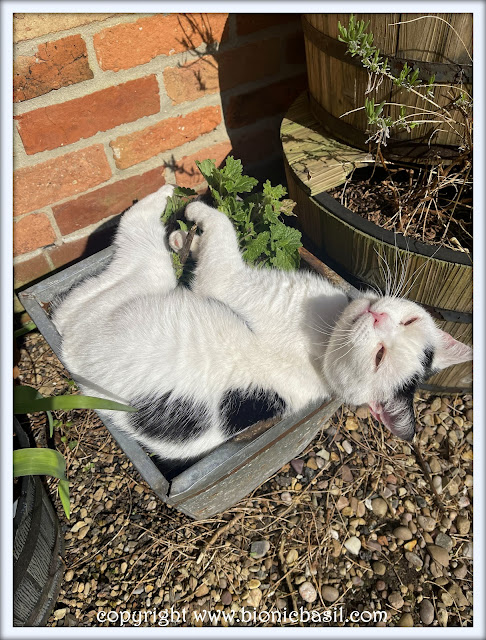 We had one sunny but breezy afternoon, so Smooch decided that the catnip plant in the courtyard needed some extra warms from the cool wind, what a kind and considerate gesture.

Snuggling with Fudge and Pandora 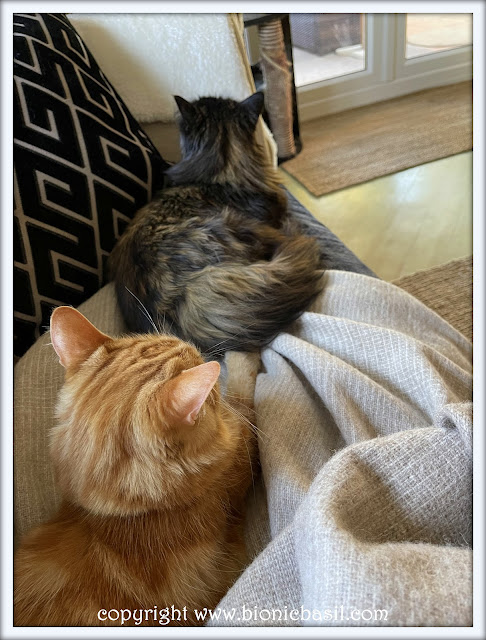 As it's been fresh, we've had more snuggles with the P.A., we've essentially been keeping her warm.
Mew know the saying:
If mew're cold, put another cat on the bed! MOL MOL

Melvyn Can't Decide What To Wear 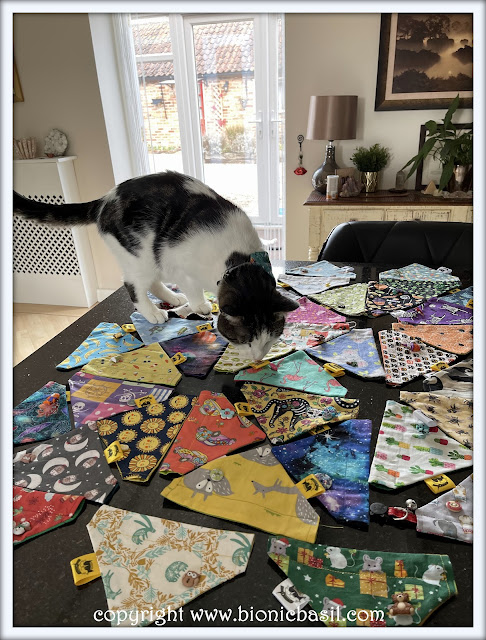 Melvyn got a few of his bandanas out the other day, as he was looking for something rather jazzy to wear.

But after spreading the bandanas all over the kitchen island, he still couldn't decide! MOL

Don't forget to stop by on Caturday, when we're sharing our epically epic Easter Crafting with Cats post.
And yes, it really is that epic! MOL

That's us done for today; Amber will be back on Friday with another fab book, and if mew missed Monday's post click here to get your latest Brain Training puzzles.