Thoughtless on Thursday With Smoochie 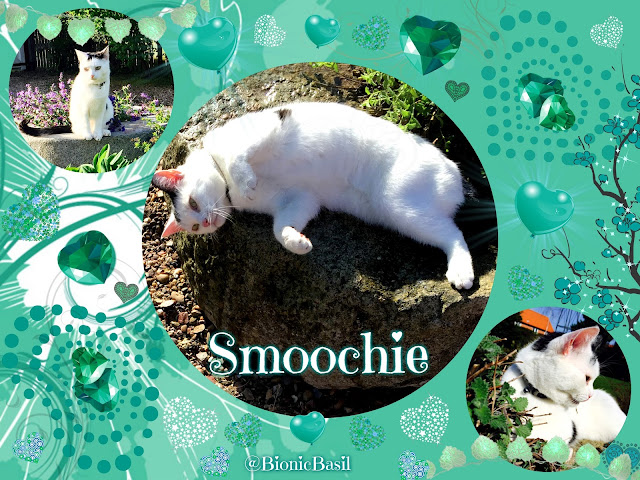 Welcome to another completely Thoughtless Thursday with Senor Le Smooch who just happens to be sharing his uber white, fluffy cuteness with thoughtless abandon today.

Mew know I say that I sometimes wunder about his mental stability, [which is highly debatable even on a good day] but aside from that small issue of him not being a full picnic, he's the total bestest effur, and to say he only has three legs he can sure keep up with the rest of us.  Even putting us to shame at times, we all love our little bebe Smoochums.

And before I furget, the P.A. asked me to post a little update on the Smoochinating purroblem from a few weeks ago.

The laptop did resurrect enough fur the P.A. to back effurything up and then it RIP'd permanently.

So effurything that took his fancy has been removed from the house and is still stashed.

The extra feeding stations were placed on pee points - there has been no more incidents at these locations.

The Feliway plug-in's are still in action - the P.A. says it's a shame they don't wurk on hoomans! MOL

The P.A. installed a WiFi camera to watch us, and she caught footage of the little heathen [I use this term in an endearing way FYI] piddling on the floor in front of the kitchen sink.

He's moved away from peeing on softness to peeing on the hard floor, but it was marking up tail in the air, not having a pee because he needed one.  So now there's a litter tray next to the sink on the floor obviously, and since its arrival no more pee on the floor.

So we'll see how that goes and update mew in a few weeks, by which time the extra tray will hopefully not be needed in that purrticular local any more.

Graphics used under paid licence www.canva.com and www.pizap.com
Glitter Text  www.picasion.com
Posted by Basil and The B Team ~ BionicBasil ® at 04:00