I do hope mew've been having a pawesome week, and some sunshine, our weather warmed up offur the last few days and if mew read Monday's post mew'll see that Basil and Smoochie were doing a bit of earthing as the weather was so great!

The good news is the new lawn is finished and looking most marvelous, sadly the electrician hasn't turned up yet so the planting on patio is now at a standstill until he arrives and installs the lighting. 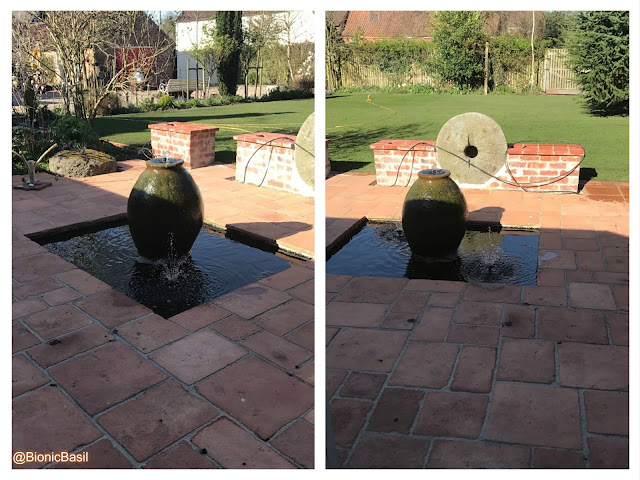 Smooch and Pandora were the soil and lawn inspection crew.

Pandora said in her odd little accent. "This lawn is quite satisfactory, I vill tell the P.A. it passes the paw test." 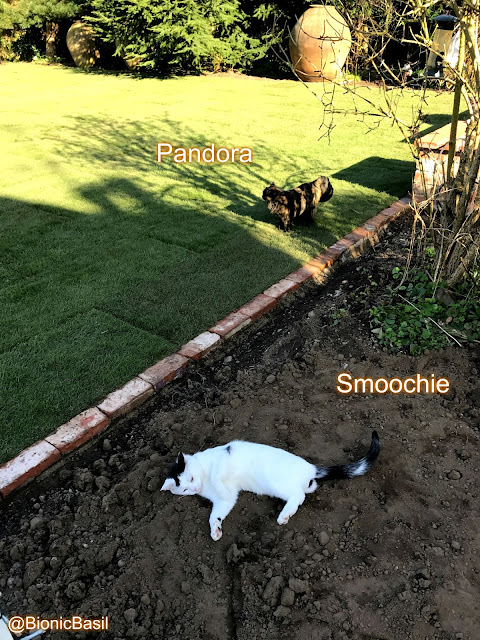 Meanwhile Smooch was back in the soil patch where the old pond used to be, before he and Parsley decided to depth charge it. Yep seriously they blew it up.

"Oh wow, I just love dirt!" he beamed. "This is the bestest, I hope the P.A. doesn't plant anything here as it's just purrfect how it is."  [mew can see his earthing video here from Mondays post]

Parsley decided to try out the new brick edging and said. "No more wet paws fur me, this is so pawesome!"

Then he got photobombed descended on by some of the hoard, which completely ruined his news report!

We'll show mew more pics when it looks a little more finished with the planting and on that note I think it's time fur this weeks book...

Cat in an Indigo Moon
A Midnight Louie Mystery

At the Blue Dahlia, the forties-style music club where homicide lieutenant Carmen Molina moonlights as a torch singer, life is becoming considerably less easygoing. An unidentified woman is found dead in the parking lot, with the words "she left" spray painted nearby.

When I bought this book I had no idea it was #10 in the series - OOPS!

This is another bite-sized listen purrfect fur a lazy Sunday afternoon in the hammock in garden, I also didn't realize that this was an abridged audio book either, as I normally only buy unabridged books, so hey this week I stuffed up big time, MOL.

Anyhoo, even though it's book #10 and there are 28 in the entire series, and it's the abridged version I really did enjoy it and will go back to the beginning and start from fresh as I love a saga of a series.

The cats play a great role and are so entertaining, if I had thumbs, it would get a thumbs up but as I don't it gets a paws up instead.

I'm sure mew'll love it and as it was originally published in 1998 I'm sure some of mew will have come across before now.

Cat in an Indigo Moon

Sadly it's time fur me to say BFN or bye-fur-now as mew know the drill, so many books, so little time and we'll be here again on Friday and if we get time we're doing another Crafting with Cats on Saturday.