The Pet Parade Blog Hop No: 186 ~ Rascal & Rocco Co-Hosted by Basil & Love is Being Owned By A Husky & Barking from the Bayou And hope mew've all had an amazing week

Mew may remember last Friday's post, where I shared my 'NOT CLONE' 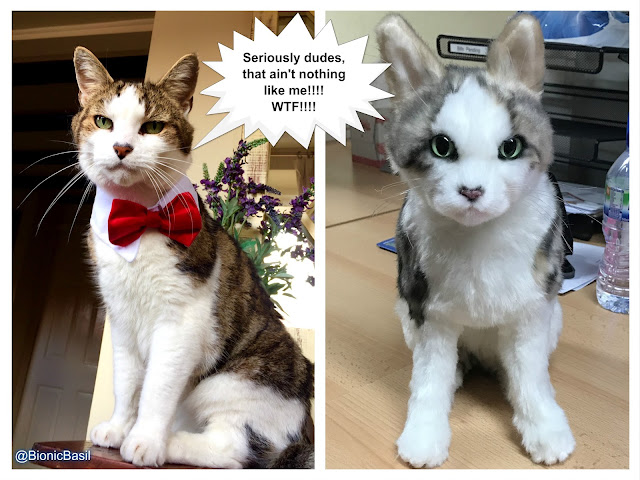 Well, the P.A. finally got a response to her email regarding the 'not clone', and aftur several back and forths, Cuddles Clones are taking that one back and re-doing it, so paws crossed it will actually look more like me when it is returned.  So we'll be shipping it back tomorrow and hopefully get one in time to take to Blog Paws. 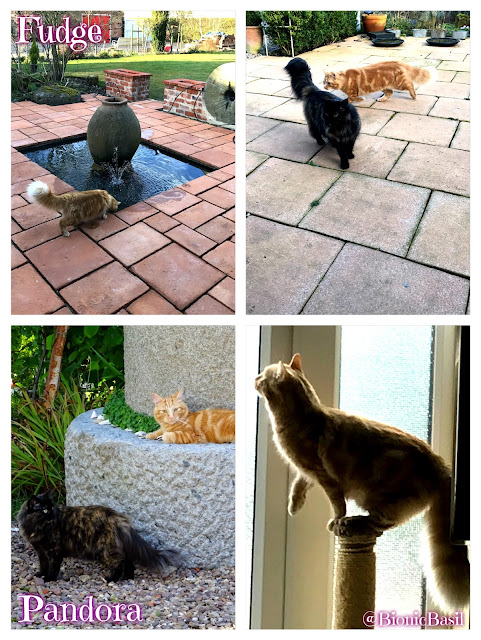 So here's the two new Heathens, Fudge has no sense of danger at all on any level - oh and mew can see some of the new patio and froggy pond, though its not quite finished.  Pandora is a little sweetheart and does an awful lot of talking, though she doesn't like nip - YEP MEW HEARD ME - which we all find furry bizarre and she doesn't like treats, which we find even more bizarre, and we think she has no purr, Smooch can't purr either, neffur has.  So the Fudginator and Miss Pandora obviously came from our favourite rescue the Burton Joyce Cat Rescue in Nottingham, where they'd been residents fur quite some time.

Fudge was being fed by a lovely lady, who so desperately wanted to keep him but her four elderly cats were having none of it, so she reluctantly took him to Aunty Elaines, where he had furry little interest from peeps looking to adopt.  We think it was because in his write-up/bio it said he was a road accident waiting to happen, Aunty Elaine was delighted when the P.A. asked about him as she knew he'd be better in Sweepy Ville where it's not so busy.  He's approximately 15 months old now and the youngest memfur of The Heathen Hoard

Pandora was found pregnant and abandoned in a field this time last year.  Luckily she was taken to the rescue where she delivered a healthy litter of kittens.  Her kittens were all adopted as soon as they were ready but sadly no-one wanted her.  She's about 2 years old now and is such a cute little cat, although we think she's almost doubled in size since we got her, which is probably due to finally having a home and being settled fur the furst time in her life.

They are currently enrolled in our Kitty Commando Training Academy as obviously we can't just expect them to know effurything about tanks, guns, choppers, tech, the bunker and our secret double-life of saving the wurld at least once a year. So we'll be giving mew updates on their training as obviously we've got a new adventure starting soon and they need to be ready! MOL

Mandalas on Monday ~ Colouring with Cats #20

Wordy on Wednesday with Amber #32

Gifs and Glitter Graphics
www.glitter-graphics.com
Other graphics used under paid licence www.canva.com and www.pizap.com
Posted by Basil and The B Team ~ BionicBasil ® at 02:00