Wordy on Wednesday with Biblio-Kitty Amber #32 featuring Know Your Cat's Purr Points: A Practical Guide for the Purr Point Practitioner

Do mew effur have; one of those weeks when it all starts out swimmingly well and then someone chucks a great big flipping boulder into your nice calm mill-pond and creates a tsunami?

Let me explain, I was out on the new patio, [pictures coming soon, we just need to get the lights sorted] the sun was shining, the new froggy pond with its fountains gently splish-splashing, being all supurr soothing and uber relaxing.

So there I was, enjoying a moment of tranquillity, just me, the froggy's and the fountains, blissful right?

Along came the heathens and ruined it, furstly by just being there and secondly they bought another cat with them. 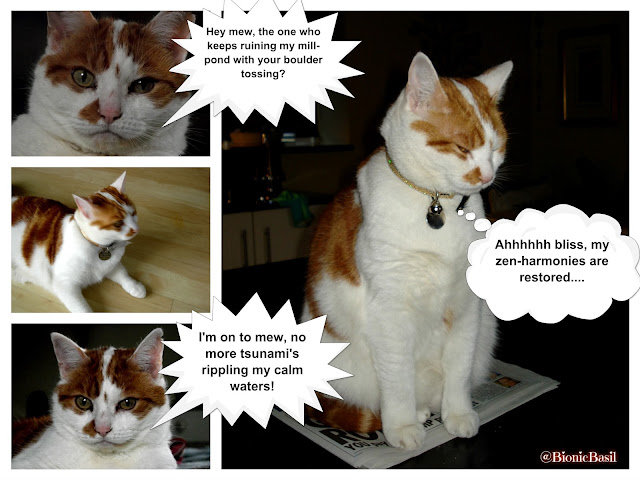 Yes, mew heard me, they bought another cat. It would seem that the P.A. who on a good day is several sandwiches short of a picnic, decided in her bizarro wisdom to adopt two new kitties.

Well, I was flabbergasted to say the least and what makes it wurse is one of them is ginger too, I mean come on, I'm the only ginger-nut allowed. Two ginger-nuts is a recipe fur.... well fur whateffur. But I'm still the numero uno ginger-nut and this young whippersnapper had better behave.

Anyhoo, I digressed there fur a moment, it would seem that the new ginger-nut likes water, I mean he seriously likes water and promptly decided to fall in the pond. To which Smooch & Parsley thought was the best thing effur when they saw the mini tidal wave traverse the small pond.

I know mew can guess what happened next, but if mew can't let's just say it involved throwing stuff into the pond!

I WAS NOT AMUSED!

So let me tell me about the new adoptees, furstly meet FUDGE aka The Ginger Ninja 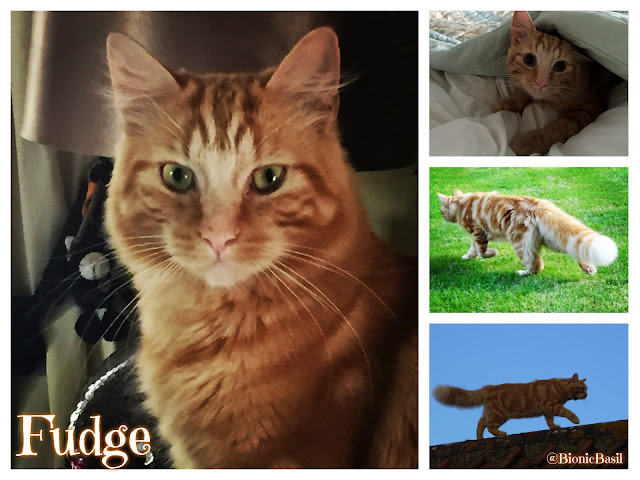 with his inter-dimensional tail, which also opurrates completely independent of Fudge, and I have deduced his tail actually has more brain cells than him! MOL

And now here's Miss Pandora, who's slightly more refined and we've just decided aftur much deliberation that she looks like an Ewok, so her nickname is now Wookie. She's a right hairy beastie too, the P.A. said she's like a little sasquatch, who's got more fluffy as each day goes by. 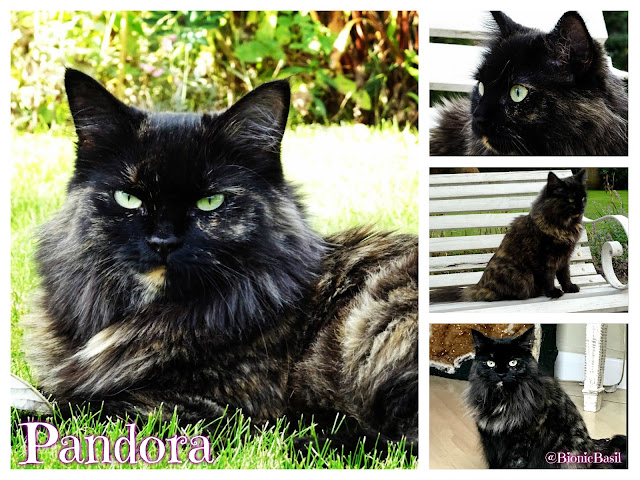 We'll be back on Friday with more news on the new recruits but in the meantime, let's talk books!

Know Your Cat's Purr Points: A Practical Guide for the Purr Point Practitioner

Purr inducing acu-pleasure for your moggy. This very cute little illustrated guide shows how to locate and work the pleasure points on a pussy cat’s body – from ears and chin to tummy and tail.
Although not ‘serious’, this is actually a very well thought through guide to the ways in which cats respond to being stroked, tickled and squeezed in the right places. It will bring smiles of recognition to anyone who enjoys coaxing a purr out of their cat.
*    *    *

Furst published in 2000,  the P.A. actually bought a copy in 2003, so it's been in the library fur quite a while and while totally tongue-in-cheek, this is a furry funny book and, the P.A. actually did try some of the purr points with great success.

It's highly entertaining and I would suggest reading it on a wet afturnoon when mew have your hooman with mew, so mew can direct your hooman in this ancient art.

Sadly it's time fur me to say BFN or bye-fur-now as mew know the drill, so many books, so little time and we'll be here again on Friday.