The Pet Parade Blog Hop No:187 ~ Rascal & Rocco Co-Hosted by Basil & Love is Being Owned By A Husky & Barking from the Bayou 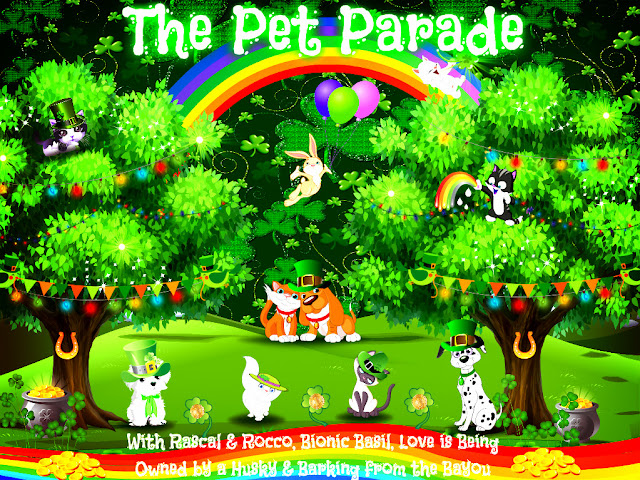 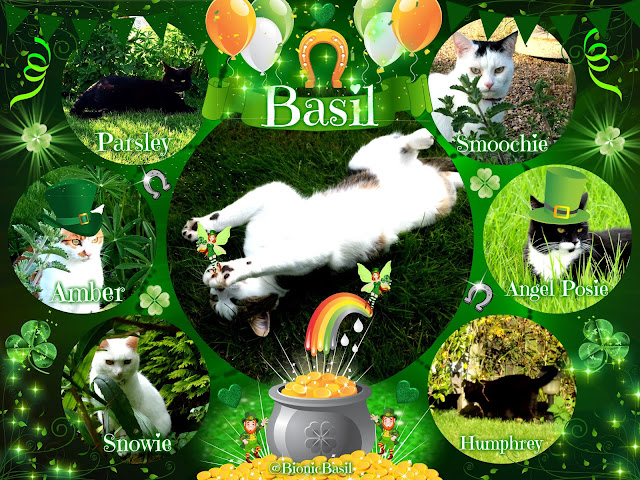 As mew can see we've really got our green on today! MOL

Well whats been happening this week, I hear mew ask?

Mew've met the newbies and they're now enlisted in our Kitty Commando Training Academy.  They are on the intensive programme, so are learning weapons skills this week.  Howeffur Pandora is quite the little madam.  She said and I quote, "I vant to be a spy Basil, and mew may call me Pandora Von DaPlume!"

I looked at her, bemewsment readily apparent all offur my furry chops.  "And what makes mew think mew can be a spy?" I asked.

"Because I am Pandora Von DaPlume and I vould make a most excellent agent!" she said in her strange little foreign accent. "I speak many languages and 'ave many skillz that mew may not know about."

I raised an eyebrow and said. "Such as?"

Her glittering eyes narrowed and she smirked. "I did a lot of research on mew and it vould seem that mew vurked fur the F.I.B., aftur checking out your furry impressive credentials, I decided that I too vould be purrfect fur that life."

I must admit she does have great evasive skillz, as no matter how much I pressed her fur info, she was not forthcoming and changed the subject each time.

She looked at me expectantly, a slight smile tugging at her mouth.

She gave me a curt nod and said, "I knew mew vould see things my vay eventually. and by the vay Fudge is a complete menace and I vould suggest that he is neffur left alone vith any kind of veapon, that is unless mew vant the bunker blown to bits!"

And with that she vanished.  "Furry impressive," I thought. "She'll make an excellent addition to the B Team."

At that moment there was an almighty boom, and a thick, black smoke cloud rose skywards.  Next came whooping and hollering and I launched offur the back fence towards the field, where to my utter dismay I found Fudge with a rocket launcher, with Smoochie & Parsley. They were all grinning and guffawing like complete loons as one of the round bales burnt to a charred crisp.  Before I could reach them Fudge fired again at another bale.  BOOM!  The huge bale exploded into a ferocious fireball.

"STOP! STOP!" I yelled as they rolled around on the grass laughing their socks off.

Fudge swung around and stared at me, rocket launcher waving all offur the place.  I ducked several times and in that moment I knew he had less sandwiches in his picnic hamper than the P.A.

"TIME OUT GUYS!" I shouted. "Rocket launcher class is done."

Fudge stared at me, his eyes had that slightly glazed look of pure ecstasy and then he spun around and pointed the weapon at another bale and BOOM!

Smoochie and Parsley were crying with laughter, but Parsley managed to say between gasps of air, "And mew thought that we were a liability, jeez Basil we've got nothing on that nutjob!!!"

"Yeah!" agreed Smooch as he pulled out a bag of marshmallows and began to toast one on the nearest flaming bale. "Where the flip did mew recruit him from?" then added rather genially. "Marshmallow anyone?"

I snatched the stick from his paw and ate the hot sticky mess, I knew I shouldn't but I needed to think.

"Did mew and C.J. fall out or something?" Parsley asked.

I shook my head and tapped my comms unit.  "Snowie get C.J. on the phone purrlease, this is an emergency!"

Guys, this is only the beginning....

Mandalas on Monday ~ Colouring with Cats #21

Wordy on Wednesday with Amber #33

In the meantime we wish mew all a truly terrific weekend and a fabulous St Paddy's Day!!