Weather Watching with Amber and Fudge, Giant Sunflowers and Parsley's Big Chill on The Pet Parade 361 with Dash Kitten, Barking from the Bayou and US!

Furst up this week is...

Weather Watching with Amber and Fudge 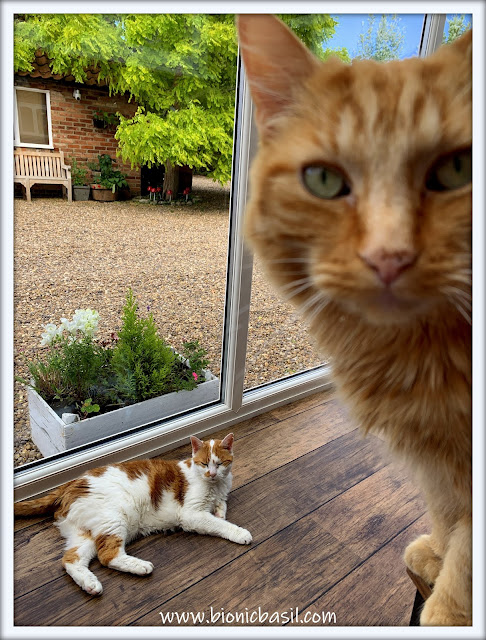 "It looks a bit black over Bill's muthers!" said Fudge as a wave of looming, dark clouds rolled in towards Mewton-Clawson earlier in the week. "We'd better batten down the hatches!"

"Who the fluff is Bill's muther?" Amber mused.

Now not many of mew will have heard that expression unless mew reside in the Nottinghamshire/Midlands borders, apparently this phrase was coined many years ago - read the actual origin here - and it is used by many today [older generation] when the sky grows dark and a storm is imminent. When the P.A. was growing up, she remembers asking her mum who Bill's muther was and where did she live, only to get a chuckle and the reply, "Bill's muther lives over there!" and a finger randomly pointed towards the incoming storm, whateffur direction that may have been! MOL

So whenever the clouds thicken, the sky grows fierce and frothy, and a nasty storm is incoming the P.A. always says, "It looks a bit black over Bill's muthers!" and it looks like Fudge has caught on.

Well, we have to keep a bit of tradition alive somewhere, don't we!

Do mew have any funny old sayings mew grew up with?

In other news, we're waiting for our giant sunflowers to get growing, they're just producing the flowerhead at the moment, but with all this topsy-turvy weather; windy, hot, cooler, scorchio, overcast, raining, humid, monsoon, cooler, scorchio, humid, overcast, gusty, drizzle and today overcast and mildly humid. It's no wunder that all the plants don't know what's going off and are a bit slow at the moment. Even the lettuce can't seem to get going, we've got some herbs to pot on and few other things too, so we'll see how it goes.

The snails have absolutely decimated all the marigolds the P.A. grew for a bit of summer colour, thank cod the geranium cuttings haven't been eaten yet!

Anyhoo, while we're waiting for this years giant sunflowers, here's one we grew a few years ago to just bring a bit of sunshine to today's proceedings. 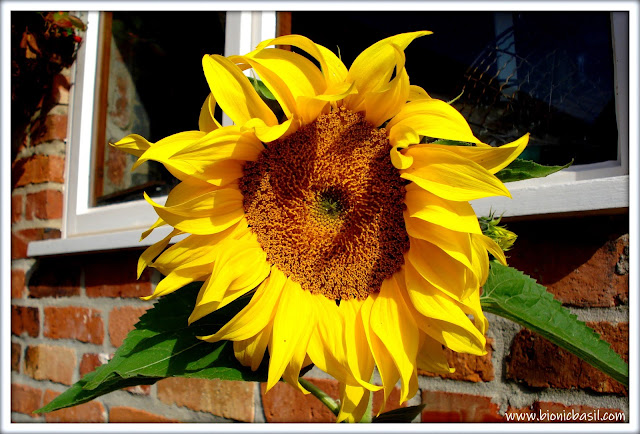 As the weather doesn't know what it is doing from one minute to the next, Parsley decided to squash his usual outdoor routine to stay inside and chill on Ambers blanket in the sitting room. 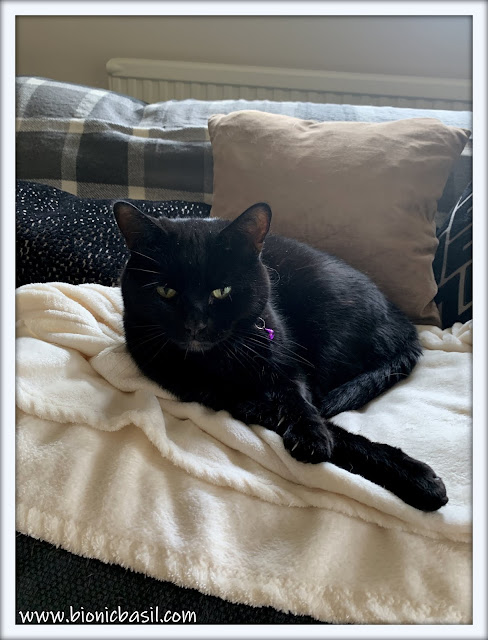 He said, and I quote, "It's supurr soft and now I see why Amber spends her evenings here!"

We'll be back with a new run of Friday Fluffers so we do hope mew can join us then and don't furget to hop along on the Pet Parade below.