We're Moving To Wednesdays and Amber's Not Best Purrleased on the Pet Parade Blog Hop No: 260 ~ Hosted by Dash Kitten Co-Hosted by Basil & Barking from the Bayou

Well the utterly epically epic news is, mew voted and The Pet Parade is moving to Wednesday starting next week!

And to kick off the ceremonies Dash Kitten will be hosting a totally terrific give-away to mark this epic occasion, so hop on offur to Middle-Earth and see all the epicness on offer.

Our new summer blockbuster The Clockwurk Labyrinth is starting next week on Tuesday Tails, so mew won't want to miss that as young Fudge get's sucked into a rather eveeel dimension and we have to go save him from some heinous entity!

When Amber furst heard the news that we were off on a rescue mission, she had this to say... 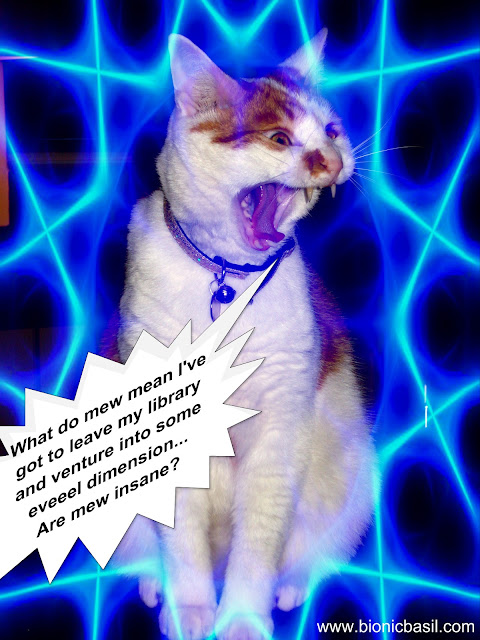 As mew can see, she didn't take the news that she had to leave her library furry well - OOPS! MOL

Well, she is right in the middle of re-cataloging her books and she's also getting ready fur the return of her book reviews on the 4th of September with a really fab book - so I can understand her reaction, sort of... but we can't leave Fudge trapped in there can we? Oh heck no we can't.

Though she was supurr, mega, epically impressed with Peaches and Paprika on Purrsday, with their National Book Lovers post, in fact she was so blown away she's given them a lifetime honorary memfurship to her private & purrsonal library as they take their library duties extremely seriously - way to go ladies - she'll be emailing mew soon!

And we have to say many apologies fur our lack of commenting, sporadic visiting and interaction offur the last few months in the blog'o'sphere. The P.A. has been and is still supurr busy at wurk with an expansion plan and it's just a huge time suck leaving us with furry little time, but hopefully in the next few weeks we'll get her reprogrammed and back on our blogging schedule! MOL

Getting All Arty-Farty with The Artful Fudger

Don't let the Pet Parade pass you by!

Graphics created with paid licence www.canva.com and www.pizap.com
Posted by Basil and The B Team ~ BionicBasil ® at 01:00
Email ThisBlogThis!Share to TwitterShare to FacebookShare to Pinterest
Labels: Barking from the Bayou, Bionic Basil, Blog Hop, dash kitten, good gad, spats with cats, The Pet Parade, Wordless Wednesdays