WOW on Wednesday's Here We Go, The Wayfair Pet Competition and The Hiba Shelter in Palestine on The Pet Parade #261 with Dash Kitten, Us & Barking from The Bayou

Welcome to WOW on The Pet Parade!

So what does WOW stand fur, we hear mew ask?  Well it stands fur, Wordy or Wordless On Wednesdays, so mew can be as creative as mew like or as wordless as mew want! MOL

Wednesday's are ours, so hop in, hop along and hop all offur the wurld to see all the great blogs that join in.

Wayfair.co.uk emailed us on Monday to tell us about their fab new competition, they are celebrating our furry friends and what they get up to—both the good and the bad!  All entrants need to do is submit a photo here of their pet as well as furniture that they’ve destroyed or have made #WayBeyondRepair 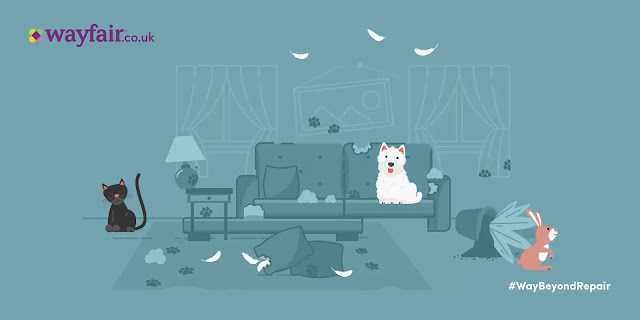 There's a £500 gift card up fur grabs, and mew can enter as many times as mew like between now and the 14th of September, so get those pics sent in and if mew win, mew could be getting a brand new sofa or rug or whateffur to scratch the fluff out of!

What could be more pawesome than that?  Absolutely nothing! MOL

And finally today, we made a fab new furriend on Instacat yesterday, The Hiba Shelter in Palestine - it is the first and the only cat rescue shelter in the West Bank, so go show them some support and say hi, mew'll be so glad mew did.

They are a new set-up and only have one peep taking care of all the kitties.

Mew can find them here:

We love peeps like this, and would like to say thanks so much fur caring fur the stray cats in Palestine, mew're epically epic and we hope that you get the team and support mew need!

As this is the furst Pet Parade on a Wednesday we'll be re-organising our posts a little, so today there are no links to this weeks previous posts, we're just looking fur a new post to put those in later in the week.

We'll be back tomorrow with another Smooch Around the Wurld and this time he's got the most wunderpurr and epically epic travel companion - guess who? - joining him on his next expedition, and just wait until mew see where they are headed! MOL

Oh and if mew missed yesterdays post, mew may want to hop offur and check out the start of our Summer Blockbuster Adventure - The Clockwurk Labyrinth - Oh My Cat mew'll neffur believe what's happening...

Graphics created with paid licence www.canva.com and www.pizap.com
Posted by Basil and The B Team ~ BionicBasil ® at 01:00
Email ThisBlogThis!Share to TwitterShare to FacebookShare to Pinterest
Labels: #WayBeyondRepair, Barking from the Bayou, Bionic Basil, Blog Hop, dash kitt, The Hiba Shelter, The Pet Parade, Wordless on Wednesdays, Wordy on Wednesdays, WoW