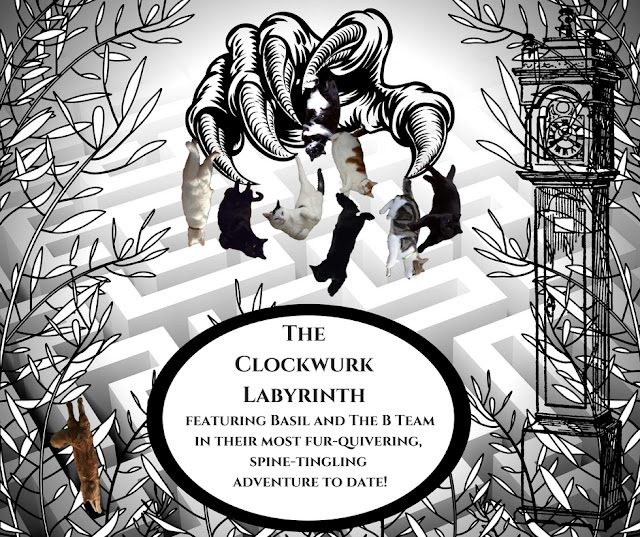 If mew missed the thrilling start of our latest adventure, here are the catch-up links...

And now here's this weeks chapter... 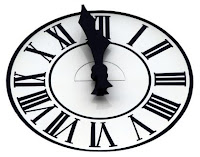 I sniffed the bowls contents and when I tell mew it was delicious, the aroma was incredible. “Camomile, what’s in it?” I asked taking the bowl from her.

She pointed to the bubbling pot on the stove with a flourish and asked softly. “Oh Commander Basil, don’t you trust me?”

This put me in a bit of a sticky-predicament; if I said no, I risked insulting our hostess and pawsibly ruining getting to Fudge in time, and if I said yes and ate it, then wished I hadn’t, I was going to be severely hissed off.  I glanced briefly at my team and noticed they were almost buzzing with energy, they had an inner glow; even Winston seemed somewhat restored, his fur looked glossier and he even looked a little fatter.  So I thought ‘what the fluff’ and downed the contents.  Moments later I felt better than ever, a warmth spread through my entire being and I don’t know how but I felt stronger, I could feel my fur quivering, bristling with energy and I looked at Camomile who was smiling. “A magickal meal then?” I wundered aloud.

She laughed and it sounded like wind-chimes tinkling softly in a gentle breeze. “Commander Basil, you are so funny, of course it was a magickal broth,” she almost trilled with delight. “And now you have the edge, The Old One’s magic will not work on you or your friends.”

Camomile nodded and started to fly towards a solid wall beckoning me to follow with the utmost urgency. “We must go, time is short!”

“Posie!” Snowie cried anxiously. “They’re all gone from the tapestry, there’s only me, mew and Fudge left.”

Posie stared the wall-hanging intensely. “That’s so not good!” she breathed.

Snowie started to pace back and forth across the Fursian rug, as Posie lifted the antique magnifying glass from the desk to take a closer look at the tapestry.  She stared at the beautiful needlewurk, it was an exquisite piece; each stitch purrfectly executed, the attention to detail was staggering as she focused on the picture of herself and jumped back in amazement as her miniature-self waved.

“Did  mew see that?” Posie blurted in shock and jabbed a paw towards the tapestry. “That mini-me just waved at me! LOOK! LOOK! Yours is waving too!!! OH MY COD what devilry is this?”

Snowie jumped straight offur the desk in a single leap and stared at her mini-doppelganger; who was indeed waving and rather enthusiastically too. “What the fluff...” she began edging back until her tail bumped the desk.

“What in Basts name is it?” Posie asked. “That is some really hinky stuff right there, and why the fluff does Basil even have something like that?”

“He has it because he loves you all,” a deep voice rumbled from the corridor.

Snowie and Posie nearly jumped out of their fur as they spun around to see Horice through the open door.

“Horice!” Posie gasped rushing to him followed by Snowie. “Mew startled us, what are mew doing up here? I thought mew were resting.”

“Aye don’t be angry little one,” he said in his gentle rumble. “I am quite well and restored now thanks be to ye Miss Posie, ye 'ave some mighty fine healing paws.”

“Don’t be fretting little ones,” Horice said genially, his trunk pointing towards the tapestry. “Captain Basil and his crew are quite well... look.”

They turned to see Basil, Humphrey, Amber, Parsley, Pandora and Smooch's mini doppelgangers reappear right before their eyes. The Tree of Life was complete once again. Yet even more mysteriously another cat appeared on one of the branches, the image was slow to reveal but aftur a few minutes there was a rather handsome and extremely dashing Maine Coon perched proudly among the lush foliage.

Posie laughed and replied. “Oh he’s definitely a hunk, mmmmmm, now that’s a man-cat if effur I saw one!”

Horice cleared his throat, Snowie and Posie blushed as he said. “The tapestry was made by Druids, it was stitched with threads infused with...” he stopped abruptly.

“Infused with what?” Snowie and Posie asked curiously.

Horice faltered and then explained. “The threads ‘ave been infused with the magickal waters from the ancient city of Bubastis, from the Temple of the great goddess Bastet herself... it is the most ancient and potent magick of all.”

“Basil had it made so that ye would all be able to remain together no matter where each of you may be,” Horice tried to explain, but it was hard to find to right wurds. “The magickal threads link you all together for eternity.”

Snowie looked at Posie. “Oh so that’s why I can’t effur get any alone time then,” she laughed.

Horice nodded. “Basil wanted to make sure his family would always be together, now and always,” he revealed. “In this life, the afturlife and all lives, mew will always end up back together.”

“No fluffing wunder we have to keep coming back then,” Posie guffawed loudly, then added thoughtfully. “And as much as I like the laid-back vibe at the RB I really, really miss all the action here.”

“Oh me too,” Snowie grinned. “I so miss my comms desk, I miss the action, the adventure and I really miss being at home.”

Horice gently picked both of the cats up in his trunk and gave them a little squeeze. “Aye don’t ye being starting to cry now,” he choked up. “We ‘ave things to be doing, preparations need to be made.”  And he lumbered down the corridor carrying Snowie and Posie.

The ground was still shaking, though the tremors began to subside. The pom pom creatures gripped tightly onto Fudge's ruff and chirruped excitedly, and he could feel the other cats and creatures at his six as he took a steadying breath, stood a little taller and squared up to The Old One.

This is it, he thought, this is my one chance... my do or die moment, and he let out his most terrifying war-cry as he launched towards The Old One.

Camomile touched the wall; the rock appeared to liquefy before my eyes, it melted away revealing a doorway into the centre of the maze. The ground was shaking, huge stone-columns collapsing, and the flickering lights cast really spooky shadows around the crumbling amphitheatre.

Something caught my eye, a movement of orange floof and that’s when I saw Fudge launching towards some hideous muther of all uglies thing; he had a spear outstretched but the thing that I really caught my eye was the fact that he was wearing a bag of brightly coloured pom poms on his back. I thought this was mightily bizarre but then who was I to question Fudge's fashion needs at a time like this!

“B TEAM GO GO GO!” I yelled not hesitating for a second as the most bloodcurdling war-cry sounded. I hurtled towards him, weapons up and ready.  Leaping offur broken columns and dodging falling debris as my focus and speed increased.  I saw The Old One lift his gnarled hand and begin to stretch out a crooked finger, extending its ragged, yellow talon straight towards Fudge, it was like watching in slo-mo and in the next moment a sparkling red glow shot forward and then slowed to an almost stop; I could see it rolling oh so slowly, light fizzing and crackling inside the magickal weapon. Fudge was sailing through the air, still emitting his spine-tingling war cry; mouth agape on a direct collision course with the red-fiery mote.

I dug deeper fur more speed and strength, then something extraordinary happened; I was right there, hanging in mid-air right in front of the lethal orb which was still caught in the time-treacle. I grasped it in my paw, it crackled and pulsed fiercely but I felt nothing as I threw it straight back at The Old One. Time suddenly snapped back to full speed and I discovered I was hurtling at break-neck pace towards a tumbling column, and I twisted sharply trying to avoid it.

The huge blocks toppled and as I looked up during my mid-air roll I saw there was no way I was going to get out this this one, and in that singular moment I looked at my team engaging The Old One; it was clinical, precise and deadly, my heart swelled with love and pride and all those other emotions which give mew the warm-fuzzies.

The Old One had no time to even react as his own death magick struck him full in the chest, dead-centre. The force lifting him off the ground and propelling him viciously backwards. The sickening sound of bones cracking as he smacked into a huge stone block made my blood chill and what I thought was going to be my furry last wurd, hung on the tip of my tongue as I heard Pandora scream some truly bizarre dialect, which sounded like Klingon crossed with Latin.

The stone blocks were suddenly immobilised not three paw widths from my head as I continued to fly underneath them. I rolled offur and offur onto the dusty ground not two seconds later and let the momentum flip me onto my paws. Looking up I saw the huge rocks drop again and crash to the floor right where I just been.

“Jumping juniper berries,” I cried. “That was fluffing close!”

Pandora gave me a brief nod and then turned her attention to The Old One. Turning to follow her gaze, I saw The Old One getting up, with jerky and rather disconcerting movements as his bones cracked into place and he began to heal. 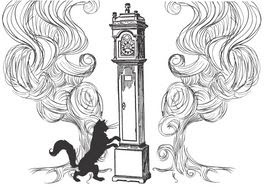 See Mew on TUEsday For The Next Thrilling Chapter

Offur and Out Until Next time 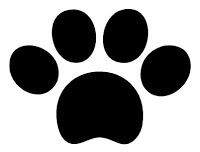